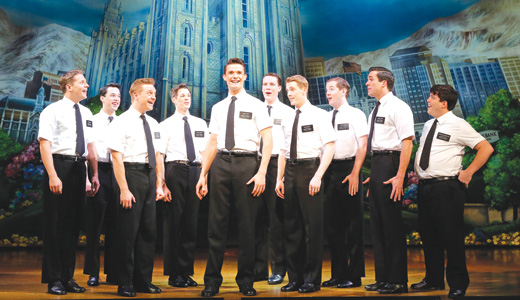 At some performances of the national touring version of the musical “The Book of Mormon,” 90-year-old couples in the front row will jump up, eager to sing and dance along. So says Christopher John O’Neill, 32, who plays the leading role of Elder Arnold Cunningham. When word first spread that Trey Parker and Matt Stone, the creative minds behind “South Park,” had teamed with composer/lyricist Robert Lopez from the adult comedy “Avenue Q,” audiences expected the filthiest, most scabrous show Broadway had ever seen. Turns out it’s a family show. Sort of.

“The cool thing about the show is it’s not just, like, two-and-a-half hours of fart jokes,” O’Neill says. “They actually wrote a musical, you know? It wouldn’t be so successful if it was just what some people might think it is. I think (the writers) want people going away saying, ‘Hey, I really liked that! I didn’t know they could write like that.’”

It’s not like the men haven’t written songs before. Throughout the 17 seasons of “South Park” and feature films like “Team America,” Parker and Stone have made their love of musicals crystal clear. “When you look back at what they’ve done,” O’Neill says, “you’re, like, ‘OK, that makes sense.’”

Behind the scenes, some wondered how the show would translate in different regions of the USA. Going to Dallas, O’Neill says, they worried about potential Bible Belt problems. But, “The places people warned us about — ‘Oh, they might not be into it,’ they’re the most into it. It’s weird. We were in Schenectady, N.Y., and everyone was, like, ‘Why the hell are you guys going to Schenectady?’ It’s like a huge small town, and it was the best crowds we’ve ever had. It’s bizarre. I’ve learned to just go with it, because I have no idea how it’s going to be. And it differs night to night, let alone city to city.”

The coolest part is feeling out each crowd, he says, knowing that the cast will be winning them over sooner or later. It’s just a question of how soon. For O’Neill, a veteran of the sketch comedy scene with partner Paul Valenti in “The Chris and Paul Show,” the tour has also been a wealth of potential future sketch material.

“It’s ridiculous, the amount of characters you run into out on the road — it’s cool, you just meet so many people. That’s the thing that’s keeping (me interested) — my brain is ADD, I’m constantly looking for new stuff to write. My comedy partner and I, we used to write a new hour show every month for three years. I like new things,” says the musical newbie whose role was originally played on Broadway by Josh Gad.

His castmates have been welcoming and kind, he says, if a little surprised by his background. “Oh, god, they think it’s hilarious. They were all really cool when I first started with the cast, but obviously, the singing — the people in the cast are so talented, their voices are ridiculous. It’s awesome, from where I started to where I am now, it’s been really cool. Being able to sing — everyone’s been so supportive. Singing every night, eight times a week, I feel like I’m a little theater person now.”

That being said, he acknowledges being an outcast of sorts. “I’m the only one in the cast who hasn’t seen every musical ever. People in the cast are, like, ‘Have you seen ‘Lion King’? And I’m, like, ‘No!’ I’m so far behind with musical trivia and all that stuff.”

He’s an important part of the marriage of comedy and music that makes “The Book of Mormon” stand out from other plays, including choreography by Casey Nicholaw, Tony-nominated for his work on “Monty Python’s Spamalot” and a Tony winner for directing the original “Mormon” with Parker. The show won eight other Tonys, including Best Musical. Lopez has also had subsequent success with songs he wrote with his wife for the hit movie “Frozen.”

“This is a cool show to see if you’re not that much into musical theater” but love comedy, O’Neill says. The “South Park” guys “were my idols growing up, so doing this show is a ball.”

“The Book of Mormon” is part of the PNC Broadway in Louisville series.