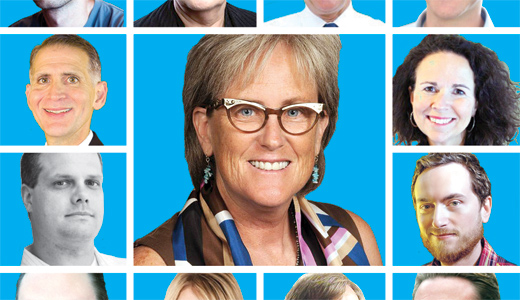 When longtime 9th District Councilwoman Tina Ward-Pugh announced she was not running for re-election this year, she said she wanted to step aside for new faces and new voices to rise up and be heard.

That call has been answered … and then some. A total of 13 Democrats are running to take over the Council seat in the mostly liberal district that runs from Butchertown though Crescent Hill to St. Matthews. Though a Republican is running for the seat as well, the winner of this Democratic primary is expected to be the strong favorite to win this fall.

Ward-Pugh — who has been a liberal champion for LGBT rights, the environment and affordable housing throughout her tenure — has said she is intentionally not endorsing any candidate, wanting to let them each make their case to voters why they should follow in her footsteps down Frankfort Avenue.

Here is a brief background on each of the 13 Democrats — having a wide range of ages and occupations — and their policy platforms, along with their websites where (most) have much more detail. LEO also asked each candidate this question: What is the one city ordinance or appropriation you would most like to vote for once you are on the Council?

Brooks is the business manager of StageOne Family Theatre and the co-founder of Theatre [502]. He wants to make the district more walkable and bikable, increase Louisville’s minimum wage to $11, and strengthen the Air Pollution Control District. Brooks also wants to fight institutional racism holding back the West End and ensure the Council will hold the Fischer administration accountable.

A: “I look forward to voting for an ordinance enacting my proposed graduated rise in Louisville’s minimum wage. It’s back-loaded to allow employers to plan and budget appropriately, and declares Louisville a truly compassionate city unwilling to wait for Washington or Frankfort to do the people’s work.”

Davis is a fundraiser for U of L’s law school, as well as various charities. He says his No. 1 priority will be constituent services, and he’ll make sure district priorities are funded. In response to youth violence, Davis believes Louisville is best served by investing in programs for kids, not more cops and drones. He is endorsed by the Fairness Campaign and the local firefighters’ union.

A: “I would support community-based youth and recreation programs (after school, parks, YouthBuild, IDEAS). I would also strive to develop public-private partnerships to implement these programs at a world-class level. The single most important investment right now should be investment in community and early childhood programs, which have been cut in recent years.”

Hollander was the managing partner of a large Louisville law firm and has played a major civic leadership role with several Crescent Hill organizations. He believes Louisville must address poverty and health outcomes in the West End, but more study is needed before the city should raise the minimum wage. Hollander was endorsed early by Mayor Greg Fischer and fully supports the local option sales tax.

A: “I am excited about a comprehensive, well-funded program for high-quality early childhood education, bringing together Metro government, the library, JCPS, childcare providers, businesses and nonprofits. Education is key to employment, health and safety. We must invest in our future and start when our children are young.”

Niemi is a criminal defense attorney who spent many years as a public defender for the poor and disenfranchised. She wants to invest in mass transit to connect the east and west, and to end the disparity in wealth and health between the two. Niemi supports Louisville raising the minimum wage and fully funding the Affordable Housing Trust Fund.

A: “Frankfort Avenue at River Road is District 9’s gateway to Louisville. Sidewalks and bike lanes are needed on Frankfort between River Road and Mellwood Avenue and should be part of the reconfiguration of Spaghetti Junction. I will work to ensure these improvements are made, and, if necessary, allocate discretionary funds.”

Bourke is a notable LGBT rights activist, having been fired as a Boy Scouts leader for being gay, and successfully suing the state of Kentucky for not recognizing his marriage with his husband, with whom he raises their two kids. Bourke hopes to keep Louisville diverse, tolerant and sustainable.

A: “(Against) the local option sales tax, which I oppose. I have been campaigning since January and have talked to an incredible number of voters in both District 9 and the Metro. Surprisingly, not one of them has said to me, ‘I would like to pay MORE taxes to finance the mayor’s pet projects.’”

Hartley is an attorney and former prosecutor who says he’s a problem solver and consensus builder. In the wake of the Waterfront Park violence, he says public safety is the biggest issue, where his perspective as a prosecutor is valuable. He believes LMPD needs more officers, and youth programs need more investment. Hartley supports the local option sales tax.

A: “I am most eager to pass a living wage ordinance. Our wages are 9 percent below the national average, and increasing the minimum wage will be an economic boost for many families in our community.”

Younger Noe has been a real estate agent for 13 years and owns two small businesses. She wants to invest in transportation and infrastructure in her district, and also hold landlords accountable. Younger Noe believes the district needs to keep a female voice on the Council and is endorsed by the Louisville Women’s Political Caucus.

A: “I want to pilot Neighborhood Action Teams for District 9. I will ask Metro Council for an appropriation that will fund this project. The teams will decide on items like sustainability, crime and code enforcement. These teams will be composed of multiple public and private partners/neighbors to address the specific needs of individual neighborhoods.”

Musselwhite is a manager at Heine Brothers and has a history of volunteer work. He wants Louisville to raise the minimum wage and do more to provide affordable housing, citing the number of homeless JCPS students. Musselwhite cautions against being driven by fear in the wake of the Waterfront Park violence, saying investments should be made in youth mentoring and intervention.

A: “The one ordinance I would most like to vote for would be to provide a dedicated public revenue source to the Louisville Affordable Housing Trust Fund. A safe, affordable home is the basic building block of the healthy neighborhoods we want in our city, and a thing more than 90,000 of our neighbors in this city don’t have.”

Vaughan is an engineer who wants to use that skill set to push for modernizing Louisville’s infrastructure to be more sustainable. He wants a section of Frankfort Avenue converted to three lanes with bikes lanes, more covered bus stops, and power lines buried underground. Vaughan is against the local option sales tax.

A: “I find the premise of the question disturbing.”

Bennett owns a small business and works with the local Girl Scouts. She wants to work with LMPD to reduce break-ins and speeding in the district, as well as to improve street cleaning and water drainage. Bennett wants more sidewalks and bike paths, and is opposed to the local option sales tax.

A: “My many walks throughout District 9 have shown the residents’ chief concern is traffic and pedestrian safety. I will take my constituents’ concerns to Metro Council. Thus, my focus for appropriations would be for safe sidewalks/crosswalks, additional bicycle paths, and to reduce speeding in residential areas.”

Imhoff is an attorney who was on the JCPS school board for 12 years, including two as chairman, and says that gives him experience to work with a large budget. He says crime is the No. 1 issue and will meet with various groups to share concerns. Imhoff supports a dedicated funding stream for the Affordable Housing Trust Fund.

A: “Affordable housing is critical. I will vote for the ordinance that will raise the insurance premium tax from 5 percent to 6 percent. The additional 1 percent will be dedicated to the Affordable Housing Trust Fund. With so many homeless children and adults, it is critical they have a place to call home.”

Morris is a lifelong Crescent Hill resident who was a Circuit Court judge for 20 years before retiring last year, and he supports increasing the minimum wage. He does not have a campaign website — this is 2014 — and drew the ire of Ward-Pugh this weekend by illegally placing yard signs.

A: Did not respond.

Clark runs a graphic design and marketing company. He missed every candidate forum and has no issue positions on his website, though it does say he “makes the best friend chicken in D9,” whatever that means.

A: Did not respond.