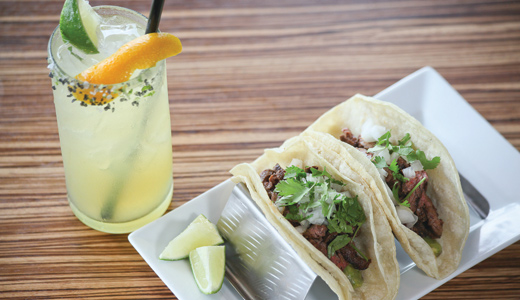 So, just how wild are the ’ritas at Wild Rita’s?

Well, this new spot just east of downtown, within the noise penumbra and particulates shadow of the Great Bridge Boondoggle, offers 10, count ’em 10, variations on the margarita, not to mention tequila cocktails, tequila tastings and nearly 100 fine tequilas by the bottle or drink. It would take more effort than I’m willing to expend to answer this question definitively.

But I’m willing to bet that my pal the Bar Belle figured it out with her report on the eponymous signature cocktail, the Wild Rita. It’s made with a blend of Maestro Dobel (a fancy clear blend of Reposado, Añejo and extra Añejo tequilas aged in oak) with orange-scented Grand Marnier liqueur, grain alcohol infused with lime, and sweet agave nectar. And then, ay carumba, they set it on fire!

We didn’t succumb to its fiery delights, but did sample a decent if rather sweet straight-up casa (house) margarita ($7, but you can get it for $4 during Wild Rita’s happy hours, which are 4-7 p.m. weekdays in the bar and lounge sections only).

You can also get a full liter of the Casa Rita — that’s a quart plus, for the metric-impaired — for $18, but thank you, no, I’m still a little wary of tequila after that unfortunate youthful experience. (Don’t we all have one of those hiding in our Scare Closets?)

Looking for something a little milder, without the alarming memory echoes, I opted for a michelada ($6), which is definitely my kind of drink. Call it a Mexican bloody mary, it’s a shot of tomato juice seasoned with a spicy shot of Tabasco and a shake of celery salt, filled up with Tecate beer on oversized ice cubes in a tall glass with a salty rim.

The bar staff is friendly and efficient, the drinks are fine and fairly priced, and the mood of the place is fun and welcoming, a bright Latino-look re-do of the historic Cobalt Building corner space that previously housed the lamented Primo and the somewhat less-lamented Mozz. Primo’s majestic old cylindrical-tile pizza oven remains in a rear corner; it appears to be cold now, though, although there is a Mexican pizza on the menu.

The bar, lounge and dining room are done up in shades of blue and white now, with bright sunny yellow and orange glass-art light fixtures, including some truly bizarre hanging lamps that look like shallow woks filled with tentacled sea creatures or possibly space aliens trying to escape. I would not want to view one of these during a return voyage from a bad tequila trip.

Wild Rita’s could be called Son of Wild Eggs. It’s the brainchild of J.D. Rothberg and Shane Hall, former owner and general manager, respectively, of Napa River Grill. Having left Napa behind to devote their energy to making Wild Eggs grow, they’re now drawing a bead on the dinner hour — and happy hour — with Wild Rita’s.

Chef Tony Efstratiadis, who’s done time at Jeff Ruby’s and other local landmarks and is now corporate chef of the Wild Eggs venture, has put together an appealing menu that features mostly Mexican goodies ranging from old standards to some creative modern twists.

Bar snacks, tortas and salads are $5 (for a bowl of soup) to $13 (for an agave-glazed salmon salad or ceviche). Mexican entradas (entrees) are mostly in the low to middle teens, while the “modern” entrees can take you up to the mid-20s pretty fast. Hungry on a budget? The eight tacos are $4 to $4.75, and you can get them half-price during happy hour.

We started with a round of guacamole and chips ($7) and were happy with both. The guac was fresh-made and chunky, with enough spicy jalapeño to warm the back of my throat. The chips were paper-thin, shatteringly crisp and salty enough to foster a thirst. Hey, it’s bar fare.

A chile relleno ($14) was excellent: a fat green poblano pepper stuffed with molten white and yellow cheeses, cloaked in a soft egg batter and roasted golden brown. Entrees come with two sides; we flanked it with tender black beans and hot Mexican corn on the cob ($3) smeared with spicy pink chile sauce.

Tamarind-glazed cod ($18) was good but didn’t really take our breath away. A smallish slab of flaky but overcooked roasted cod drew most of its flavor from its tangy tamarind sauce. Sides of calabacitas (roasted squash and tomatoes) and refried beans were OK.

The cod was the only disappointment, though. Tacos sin carne ($4) loaded with chiles, mushrooms, cheese and pico de gallo were very good; tacos carne asada ($4.75), filled with savory grilled skirt steak and onions, were outstanding. Another round was an easy decision at happy hour half-price.

Your tab comes out with wacky pricing in both pesos and dollars … my first glance at a 575.71 bottom line imposed brief brain freeze until I saw the $43.45 translation above it. We tipped 20 percent on the dollars, not the pesos. Drinks and tacos during a happy hour return trip totaled $17.77 plus tip. That’s in dollars.