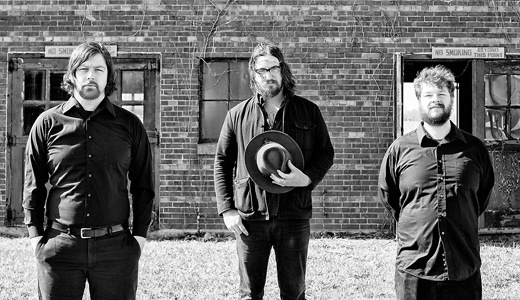 Evan Patterson reinvents Young Widows each time. “It’s intentional. The idea of a band releasing the same record over and over again, I’ve always tried to stray from.”

Easy Pain, which comes out May 13, is the third Young Widows studio album guitarist/vocalist Patterson, bassist/vocalist Nick Thieneman and drummer Jeremy McMonigle have made for label Temporary Residence Ltd. since 2008 (a first album with a different drummer and label home was released two years prior).

“Some people always go, ‘I don’t really like the new record’ — it’s because it’s not the same thing as the last one,” Patterson says. “They might not like the mood of the new record, or the general approach to how the entire record flows — but we’ve always tried to make very cohesive albums, rather than just a bunch of songs on a record that don’t make sense together.”

Easy Pain is not a concept album, but there is an overarching theme. “It turned into this whole idea about accepting death. The more you accept death, the more exciting life becomes, and the more you live to your full potential,” he says.

“The last song on the album is called ‘The Last Young Widow.’ In my mind, it’s about a mother birthing a fatherless child, and the mother actually is on her deathbed at the same time as she’s birthing the child. And whether or not she’s going to go to heaven or go to hell, or just die. It’s more about accepting life, being prepared to die, and not worrying about what happens after you die.”

If it sounds like it’s heavy spiritually as well as musically, then you might be on Patterson’s wavelength.

“Yeah, it is, actually,” he says. “It speaks to me more … I feel like my lyrics in Young Widows had been more self-absorbed and more personal, and this record’s not very personal at all. It’s more storytelling. They’re songs I can sing at any point, and they’d still have the same energy and meaning they did when I wrote them.”

He had “a very specific idea” about how Easy Pain should sound, from the instruments to the vocals. One inspiration was the recording of John Lennon’s “How Do You Sleep?,” produced by Phil Spector. Another was Iggy Pop’s album The Idiot; Pop’s vocal approach changed the way he sang this time, as did Patterson’s experience playing in two different bands lately, Old Baby and Jaye Jayle. “I used my voice in ways I haven’t been able to attempt.”

He approached the creative process differently this time around, part of his continued evolution. In the past, Patterson says, he would write down lyrics for the music the band had written together, often working up lyrics from demos.

This time, as the band played their new music live, Patterson sang “jibberish,” sometimes finding words as he vocalized. “I didn’t have any clue what I was saying … Other times, it was just, like, howls and moans that were creating melodies. The whole idea is that I was hoping I would find something I wouldn’t find just sitting down (and) listening to it, writing down lyrics and thinking of melodies that way. Instead, it was more of an organic approach to the live energy of playing the songs.”

Some older songs bring him back to specific moments that have since passed. He doesn’t feel the same anymore, or care as much as he once did. “With these songs, I can feel this way for the rest of my life,” Patterson says. “I feel like I’ve summed up my attitude, the way I feel about life and religion and science and the whole thing.”

In addition to his three bands, his brother Ryan has, for a decade, led the band Coliseum, now also part of the Temporary Residence gang. Evan Patterson agrees music is his religion. “No doubt. I depend on music as an outlet and as a form of expression and family and communication.”

Church, he says, can be going to the practice space, or going to a friend’s house to listen to records. ”A lot of times, where the magic happens, the more spiritual side of playing music, is when you’re sharing it with other people.”