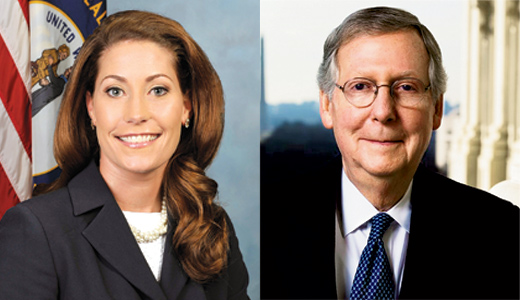 The battle between Mitch McConnell and Alison Lundergan Grimes to show voters whose unconditional love for the coal industry is the strongest is getting more and more ridiculous by the minute.

Two weeks ago, the Kentucky Coal Association warned that any U.S. Senate candidate who accepts a contribution from Tom Steyer or his NextGen Climate Action PAC — the big money donor seeking to help elect environmentalist candidates — would be tarred as an enemy of the coal industry and face their own electoral peril. Though KCA didn’t name specific candidates, they were clearly referring to Grimes, as McConnell’s campaign trumpeted that Grimes spoke to a group that same day that Steyer is a member of.

But if association with a perceived “enemy of coal” is a sin, a report last week from CNHI’s Ronnie Ellis made this new rule much more complicated. Ellis pointed out that McConnell’s Senate campaign accepted $2,000 from Texas businessman David Litman, who successfully lobbied to block the construction of several new coal-fired power plants in his state, citing the negative effects of its pollution.

Holmes’ excuse makes us wonder if he’d have no problem with Grimes if she took a large contribution from an environmentalist, as long as that donor said they supported her because of her stance on raising the minimum wage or the Violence Against Women Act. It’s safe to say he would not.

Making this new “guilt by association” rule of KCA and McConnell even more complicated is the presence of McConnell’s wife, Elaine Chao, on the board of directors of banking giant Wells Fargo. Chao began serving on Wells Fargo’s Corporate Responsibility Committee in 2011 as the company began an aggressive new policy to invest $30 billion in green energy and divest from the coal industry.

Citing the environmental damage of surface mining and emissions from coal-fired power plants that contribute to climate change, Wells Fargo announced it would no longer finance mountaintop removal mining projects, coal companies whose majority of production is from mountaintop removal, and construction of coal-fired power plants on a stand-alone basis. These moves by Wells Fargo drew praise by anti-coal groups such as the Rainforest Action Network and Sierra Club, significantly improving the company’s grade on environmental corporate responsibility when it comes to coal.

Perhaps Holmes could excuse Chao bringing $600,000 in Wells Fargo’s anti-coal money she earned during her tenure back to McConnell’s household because she really loves her husband.

While many would say the divestment strategy by Wells Fargo under Chao’s leadership is an admirable stance to take in the face of coal-mining pollution and climate change, the actions of Grimes last week lead us to believe that she is not one of those supporters. After Stanford University announced it would divest its stock in coal companies due to carbon pollution contributing to climate change, Grimes penned an angry letter to Stanford chastising their decision, which she says is “bad environmental policy and bad energy policy, and it sets a poor standard for national citizenship.”

That’s right, according to Grimes, choosing to invest in green energy instead of one of the leading causes of climate change is downright “un-American.”

Grimes’ letter went on to say that while she is not a climate change denier, such policies will hurt Kentucky’s coal miners, and the solution to climate change is the development of “clean coal” technology — which is many years away from being economically feasible, if ever.

While Grimes is attempting to woo voters who are “friends of coal” in eastern Kentucky, we wonder if she’s trying to attract people who would never vote for her anyway, while alienating liberal voters in Louisville and Lexington, where she needs a large margin of victory to defeat McConnell.

Gov. Steve Beshear has won the praise of many Democrats in Kentucky for his successful implementation of the state’s health benefits exchange under the Affordable Care Act, Kynect, under which over 400,000 Kentuckians have signed up for health insurance coverage, the majority of which previously did not have insurance. However, a court briefing filed by Beshear last week has turned much of this praise into outright scorn.

Beshear already angered LGBT rights supporters by choosing to appeal Judge John Heyburn’s decision striking down Kentucky’s ban on recognizing same-sex marriages as an unconstitutional violation of the equal protection clause. Beshear’s brief filed by outside counsel — Attorney General Jack Conway refused to continue with an appeal, on principle — upped the outrage ante by claiming that same-sex marriage should remain banned because it would lead to a decrease in our birth rate and hurt our economy.

“Though there is a cost to Kentucky by granting tax and other benefits to man-woman couples, a stable or growing birth rate offsets the cost,” Beshear’s brief read. “Only man-woman relationships can naturally procreate, and only those relationships, therefore, are afforded the state-sponsored benefit.”

This head-scratching statement leads us to ask the following questions to Beshear: What about the same-sex couples who could raise the 7,000 children in foster care in Kentucky, whose care currently costs the state $50 million annually? Should we also deny the marriage rights of infertile opposite-sex couples, since the only purpose of their union is to procreate? What about same-sex couples who can use artificial insemination and surrogates? Why would same-sex marriages make heterosexuals procreate less? Also, what the hell is wrong with you?

Conway announced last week he is running for governor in 2015 and might face a competitive Democratic primary. He’s probably quite grateful at this point that he decided not to continue with this quixotic case in support of discrimination, where he might have been forced to make such absurdly stupid arguments in public.