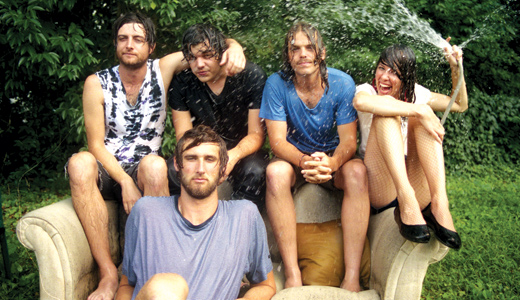 Every year, the Center for Interfaith Relations brings together different faiths for a unified conversation about the role of faith in society through common action. For this 19th year, the weeklong festival includes daily guided meditations, speakers, films and photographic exhibits centered on the theme of “Sacred Earth, Sacred Self.” Highlights include a joint appearance by Kentucky’s own Wendell Berry and Pulitzer Prize-winning poet and environmentalist Gary Snyder, where audiences will have the chance to buy advance copies of their upcoming book, “Distant Neighbors.” Other notable presenters include Patrick Holden, founder of Great Britain’s Sustainable Food Trust, and Shayk Hamza Yusef, co-founder of Zaytuna College, America’s first Muslim liberal arts college. Oh, and speaking of college, students are eligible to receive half-price tickets. —April Corbin

“We are everyone’s Science Center, and science is for everyone,” Kentucky Science Center executive director Joanna Haas says. But this foodie event is actually only for those 21 years old and older. The next chapter in a series of adult ed events that began with “exBEERiment,” “MegaBite” explores the science of food in a kid-free environment. The center isn’t promising explanations of why Mickey Rourke pouring strawberries all over Kim Basinger is supposed to be sexy; instead, it’s more conventional hands-on sampling, lecturing and competing — without having bored kids pulling on anyone’s pants. Stone Cross Farm will share the science of sausage (sexy!) and cheese, KSC staffers will discuss molecular gastronomy, and a dozen local favorites will offer samples. A culinary battle featuring “gladiator” chefs will serve as the centerpiece. —Peter Berkowitz

Rye’s “Back Porch Sessions” return for another summer season of free music on the lovely patio of an excellent restaurant, with an even bigger line-up of talent booked from around the nation this year. This month’s headliner is the Raleigh, N.C.-based indie pop-rock band The Love Language, led by Stuart McLamb. Merge Records has worked with them since 2010, an ever-shifting band McLamb describes as “an extroverted community art project made by responsible citizens of a loosely packed scene who know that he will match whatever they contribute.” Loud local rockers Julie of the Wolves and Twenty First Century Fox open. Subsequent shows will take place on the third Thursdays of June and July, with a big blowout planned for late September. —Peter Berkowitz

Non-Jews making jokes about Jews are called racist. Jews making jokes about Jews are called Gary Gulman. The Massachusetts native and former substitute elementary school gym teacher will be stopping by to get some laughs in a series of performances at The Laughing Derby at Comedy Caravan. A finalist in not one but two seasons of NBC’s “Last Comic Standing” (because once was simply not enough), Gulman’s comic style tends to focus on daily life. He has also been known to mix tidbits of his religion into his jokes, which is generally accepted because 1) he is Jewish and 2) it’s the comedy world, where nearly everything goes. What better way to spend a Saturday off (which Gulman says the Jews are entirely responsible for — you’re welcome) than by laughing at the way a 6-foot-6 man sees the world. —Olivia Krauth

The Pains of Being Pure at Heart

Just three days after their third album Days of Abandon drops, The Pains of Being Pure at Heart bring their indie-pop sound to Zanzabar. The NYC-based band is named after a children’s story of the same name, which the band’s singer, guitarist and lead songwriter, Kip Berman, says focuses on what truly matters in life: being happy and developing friendships. He didn’t want to make a copy of previous album Belonger, he says. “This album was a chance to step back from that universal style of songwriting to something that was far more personal, more in keeping with my original ideals. I wanted the music to be joyful and full of light, even if the subjects were often dark.” The show also features the UK-based Fear of Men and L.A.-based Ablebody. —Olivia Krauth

As an Old Louisville resident, let me be the first to say: Old Louisville deserves more love. Sure, we get a pat on the back every fall during the St. James Court Art Fair, but this beloved historic district is worthy of year-round praise. We are one of the most economically and racially diverse neighborhoods in Louisville. We have more Victorian homes than any other preservation district in the country. That combo is a sure-fire recipe for a neighborhood full of charm and character. Soak all that in this weekend at the third annual Old Louisville SpringFest. Kiddos can enjoy a bounce house and other activities, while adults can imbibe on grown-up libations and the company of neighbors who are either too cool (or not cool enough) to live in the Highlands. For everyone, live music and local food trucks. —April Corbin

This is an event that gardeners/art lovers/all-around outdoorsy types wait for each year. Yew Dell’s Garden Sculpture Show likes to surround sculpture with foliage and flowers, reiterating that they all belong together. Not that I have anything against garden gnomes, but the work featured in this juried exhibition will certainly class up your personal landscape. More than 20 regional artists, including featured sculptor Ed Hamilton, created the pieces for sale this year. Expect to find many styles in multiple media (metal, wood, stone, glass and ceramic), from the humorous to the monumental. The opening reception is Friday from 5-8 p.m. ($25 members, $35 non-members). Attendees will save 10 percent off their purchases. —Jo Anne Triplett

Eating for a good cause is satisfying for your stomach as well as your heart. Creative Diversity Studio’s Pasta Bowl Fundraiser fits the bill on both levels. Creative Diversity has a roster of artists with disabilities who need studio space and art supplies. Since most of the money made from art sales goes to the artists, the organization holds this fundraiser each year so they can continue to offer gallery representation and artistic support. The dinner includes pasta, dessert, beverages, live music and a raffle drawing. Recent work by the Creative Diversity Studio artists will be for sale, and you can even buy a ceramic bowl to put your pasta in. Tickets are available at Creative Diversity Studio, 107 S. Ewing St., and City Café. —Jo Anne Triplett

Gilda’s Night of a Thousand Laughs

It is generally known that laughing is good for the soul, but it is even better when it’s helping others’ souls. Gilda’s Night of a Thousand Laughs is an event built on this idea. For one night, some professional (and not so professional) comedians will take the stage to raise money for those seeking cancer support at Gilda’s Club. The organization, named after original “SNL” cast member and cancer victim Gilda Radner, focuses on providing support and information for any and all touched by cancer. Prices range from show-only tickets ($40) to general tickets (show, two drink tickets and access to the after party, $75) to VIP tickets (comedian meet-and-greet, dinner, open bar, show and after party, $150). —Olivia Krauth

A few months ago I wrote a column about Lyle Lovett and my anger toward him after discovering that Texas men don’t, in fact, buy you beer for free, as he clearly states in his song “That’s Right (You’re Not From Texas).” I was only half-kidding, of course — I didn’t really expect Texas men to buy me beer. But I do expect Lyle to buy me one for making such a claim, and I plan to collect said free beer on Saturday at the Iroquois Amphitheater when he performs with his Acoustic Group. I’ve been a fan of Lyle’s intricate, uncanny and oftentimes humorous storytelling ability through his music, and I’m looking forward to him performing newer material off of 2012’s Release Me as well as older stuff, like “Cowboy Man” or “If I Had a Boat.” An acoustic set with Lyle Lovett underneath the stars sipping on a free beer — is there a better way to spend the evening? —Sara Havens

The band known as The Band was way ahead of their time in many ways. Right after they were one of the first musical acts on “Saturday Night Live,” they were also preparing one of rock’s first all-star multimedia events: a black-tie gala where they’d play backup to their most famous collaborators, with Martin Scorsese’s cameras rolling. The performances, film and multi-disc album all became revered (and branded) as “The Last Waltz.” Now, on behalf of Best Buddies Kentucky’s programs to benefit the disabled, regional musicians will be recreating that 1976 uber-set in a concert event they call “Such a Night!” The Mercury Ballroom will be the site as Johnny Socko alumni join in behind a Rolling Thunder Revue-era Dylan stylist, a Van Morrisonesque raver, and a pair of singers re-enacting a vividly haunting back-and-forth between Neil Young and Joni Mitchell. —T.E. Lyons

Louisvillians love keeping it local as much as they love shopping, dancing and drinking at outdoor venues. The sixth annual Buy Local Fair once again takes over the Water Tower’s lawn to showcase more than 170 businesses that prosper in Louisville thanks to your choice to shop and eat with them instead of, say, at Walmart or Applebee’s. Hosted by the Louisville Independent Business Alliance (LIBA), the event will also feature a cooking competition between Joe Benet of RYE and Annie Petry of Decca, a craft beer tent sponsored by ValuMarket, a farmers market, a kids’ area, and live music from Bookshelf, Karston Nelson, Small Time Napoleon and Field of Kings. Come out, get a tan, drink a beer and see the best of what Louisville has to offer. —Sara Havens