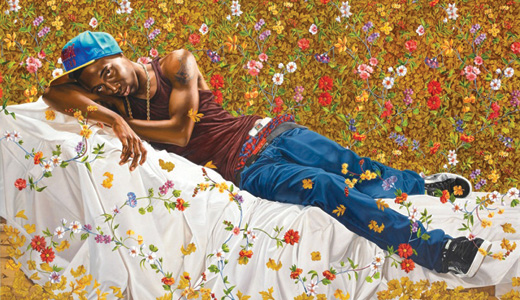 ‘Kehinde Wiley: An Economy of Grace’

Instead of featuring a film out of their collection, this month’s Art21 screening at 21c features the documentary “Kehinde Wiley: An Economy of Grace.” Directed and produced by Louisville native Jeff Dupre, the documentary focuses on artist Kehinde Wiley (some of whose works are in the museum’s collection) and his journey to understand the scarcity of black subjects in art. Wiley created a portrait series that featured hand-picked models from the streets of New York City, set in poses more typical of the 18th century works he was studying than the modern day locale in which they were found and living. By creating a unique mix of classical painting techniques and urban elements, Wiley is able to provide a new twist to a movement deemed bland by many. —Olivia Krauth

Fans of “RuPaul’s Drag Race” don’t need any spoiler alerts here — “black horse” Joslyn Fox did not make it to this season’s finale, though she did win many fans during her stay on the competition series. OK, so maybe she’s not yet America’s next drag superstar, but there’s plenty to like about Miss Joslyn’s charisma, uniqueness, nerve and talent, from her sunny personality to her very fishy style. Fun fact: Massachusetts-bred but country lovin’ Foxy recently appeared in a music video filmed here, starring Nashville’s Glen Stewart. (Another fun fact: She has learned to not ask Cher’s mom about abortion.) Foxy performs alongside the Playmates during the 10 p.m. and midnight shows and will meet and greet fans between the two, so reserve your table online today. Wonk wonk! —Peter Berkowitz

Once again, hordes of Paul, Ringo, John and George fans will descend on the Belvedere to hear tunes they’ve heard thousands of times — and love every minute of it. If you’re a true Beatles fanatic, there is no number too high you can hear “All You Need is Love” or “Eleanor Rigby.” More than 60 bands from near (Nervous Melvin & the Mistakes) and far (The Beatribes from Japan) will play Beatles music throughout the five days, and The Beach Boys are even joining the party on Sunday evening, as is John Sebastian. Special guests like Freda Kelly, longtime secretary for the Beatles, and Tony Bramwell, who worked with the band at Apple Records, will host Q&A sessions. A parade, marketplace and artwork by Irish graphite portrait artist Georgina Flood round out the special events. May the long and winding road lead you to the Belvedere. —Sara Havens

Refrigerator doors are clogged with save-the-dates and Pinterest is about to collapse on itself from the weight of all the ball jars full of flowers and the hundreds of bobby pins and gallons of AquaNet required to keep all those up-dos from wilting. Just in time for wedding season, Eve Theatre Company’s latest offering tells the story of four friends who’ve made a pact to be in one another’s weddings, no matter the number of years that have passed since high school or how many goddamn shades of coral there are for a dress they’ll never wear again. Directed by Kentucky Country Day School arts chair and drama instructor Kate Scinta, “Always a Bridesmaid” closes out Eve’s second season, continuing their mission to “produce works that explore the human experience from a female perspective.” —Jane Mattingly

While I’m not sure if there are true, diehard strawberry fanatics in the area (or in the country, for that matter), if there are, the Starlight Strawberry Festival sounds like their dream come true. For more than 35 years, the Starlight, Ind., festival has celebrated the start of strawberry season with food and festivities. This year’s highlights will include a build-your-own strawberry shortcake stand, a wine and beer garden, live music, family-friendly festival games and rides, and the Little Miss and Mister Shortcake contest for those under the age of 6. For the early risers, there is also a 5K Run/Walk for the Berries beginning at 8 a.m. —Olivia Krauth

After an appearance at Forecastle last summer, The Pimps of Joytime return to Louisville, this time for a show at Zanzabar. Having developed a signature mix of musical styles — including salsa, electronica, rock and afro-beat — on their two studio albums, the Pimps’ infectiously danceable tunes are sure to leave the audience wishing they had worn sweatbands to curb the certain large-scale hidrosis that will be on display when the PJT get a grip on their crowd. Approaching a decade in existence, the Brooklyn group is still grooving like few can. Opening for them is Louisville band D’Arkestra, featuring nine members who play “post-rock and indie-jazz.” If you’re looking for a surefire dance party, you need only make a trip to the St. Joseph neighborhood. —Ian Ording

U of L’s Hite Art Institute professor Mitch Eckert is well known for his use of object as metaphor and digital experimentation, resulting in photographs that are thoughtful and time consuming. Yet this latest body of work, appropriately titled “SURFACE,” lets the viewer see what lies above. It’s springtime, with the talk of gardens coming up in everyday conversations. That’s Eckert’s focus as well, but on a more formal level, with images that hover over the surfaces of topiary, hothouses and hedges. However traditional the gardens might be, the cameras he uses, such as iPhone and pinhole, are not. The shapes repeat, revealing details we might miss if not deeply examined, making us realize only the title of the exhibition is shallow. —Jo Anne Triplett

Dreamland hosts one of the most eclectic and important record producers of the past 30 years as Martin Bisi visits. Co-founder of the BC Recording Studio with Brian Eno and Bill Laswell, over the past five years Bisi has begun touring on a substantial level, supporting his own solo albums — expect equal parts psychedelic and punk rock from the New York native. His producing discography is much longer than his performing one, including records of disparate acts from Swans and Sonic Youth to Afrika Bambaataa to Helmet and White Zombie. His solo work most closely resembles the two former acts, with some experimental musicianship added. Also performing that night are Invisible Things, whose newest album was recorded by Bisi, as well as local group Visiting Nurse. —Ian Ording

‘Slave to Impulse’ by Joshua Jenkins

The newly relocated Tim Faulkner Gallery is opening its spacious floors to an artist whose work may be familiar to Louisville nightlife buffs. Joshua Jenkins’ works have been at various locations around the River City over the past two years, including the large mural at Nowhere Bar in the Highlands. His collection of new paintings, “Slave to Impulse,” is a reminder, much like most of his work, that art comes from within and that artists must avoid becoming “slaves to the initial training of art.” Influenced by classic names like Pablo Picasso and more modern artists such as Jean-Michel Basquiat, as well as graffiti on the streets of inner Philadelphia where he briefly lived after college, Jenkins’ art fills the gallery with stark outlines and bright colors. —Ian Ording

The Carnegie Center for Art and History has made quite a name for itself in the textile and fiber world, especially with its art quilt shows. Their 11th annual “Form, Not Function” juried exhibition showcases some of nation’s best contemporary wall hangings. While the show features some traditional quilting techniques, as in the Carnegie’s decree that the work have “two or more layers held together with stitches,” the results are decorative only, as the exhibition title explains. But from there, anything goes. A handful of the 25 quilts selected for this year’s “Form, Not Function” have received cash prizes, with an additional award to be voted on by exhibition visitors. There are several upcoming events, including a public lecture by internationally known fiber artist Dorothy Caldwell. —Jo Anne Triplett