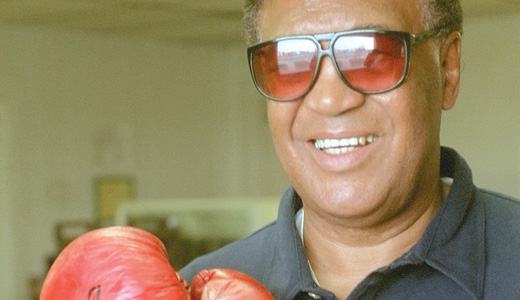 From 1968 to 1970, this was Jimmy Ellis’ world and the rest of us just lived in it. That is because Ellis, who died in early May at the age of 74, was then the Heavyweight Champion of the World. He was a mighty warrior and had the professional record to prove it. Of his 40 wins, 24 were by knockout. In his comparatively small 12 losses, he was only KO’d four times. Ellis was a hard puncher, but, more importantly, he could take a hard punch. He had famously been a sparring partner to Cassius Clay right around the time Clay was in the process of changing his name to Muhammad Ali. The two men fought three times: twice as amateurs and once as professionals. Ellis beat Ali once. On the way to that last fight with Ali, though, Jimmy Ellis worked his way up through the ranks of what was — at least in the heavyweight division — the glorious golden age of American prizefighting.

Ellis became a heavyweight champ through an interesting sequence of events, the first of which was the stripping of Ali’s belt by the World Boxing Association and the revocation of his boxing license as a result of his failure to report for the Vietnam War draft. The WBA called a special tournament to fill the throne. Joe Frazier, the heir apparent, sat out of the contest in order to show support for Ali. Ellis was an underdog in each of the fights he fought in that tournament, but he won them all. That’s how he became champ in 1968.

He subsequently defended his title successfully against Patterson and then sat on the sidelines through a series of delayed and cancelled fights until running into Frazier at Madison Square Garden in 1970. That one didn’t go too well.

In 2000, I interviewed and wrote about Jimmy Ellis for this newspaper. I met him and his gracious wife Mary at the Ringside Café, a diner on Seventh Street Road. We had been introduced by his manager, Howard Gosser, who told wild tales of their time on the road signing memorabilia in Louisville and Houston and San Diego and Canastota, N.Y., and points east. Ellis was definitively part of a Louisville boxing tradition that will be remembered for a long, long time. He is a member of the International Boxing Hall of Fame up there in Canastota. He was as pleasant a man as I’d ever interviewed.

At that time, he was doing a lot of work at the Riverside Baptist Church in downtown Louisville and promoting a CD called Gospel with a Punch. The CD holds up quite well after all these years, featuring a solid R&B backup group composed of family and friends from the church. In 2000, I wrote “… his voice is deep and rich, but he’s still no Al Green. As a human being, however, Jimmy strikes me as a true giant.”

When I saw him perform the recording karaoke-style at the Eastern Parkway Baptist church early one Sunday morning, it certainly was nothing like any churchgoing experience I had ever had. A woman in the congregation asked Ellis if he did not feel a contradiction between preaching the gospel and beating people up for a living. His simple and elegant response was, “I never saw any contradiction. I put my faith in God and God gave me the strength and made me champion.”

It is often said that Ellis lived permanently in Ali’s shadow. His first thought of becoming a boxer came after seeing the young man then named Clay on a Louisville TV show, “Tomorrow’s Champions,” and rarely is his name mentioned without some reference to Ali. But Ellis was more than a footnote, and his life was about much more than just boxing. Much of his time on this earth was devoted to church work and community service, as well as the music.

A boxer has to know when it’s time to get out of the ring. For Jimmy Ellis, that time came once he beat Carl “The Tank” Baker in 1975, knocking his opponent out in the first round. By this time, Ellis was aware of the detached retina in his left eye, possibly from the earlier Ali fight.

Ellis was felled finally by something called dementia pugilistica. “Dementia” because it is a disease that leads to mental/memory deterioration. “Pugilistica” from pugilism, that is, boxing. It would be a cheap, even insulting, metaphor to simply say Ellis was killed by fighting. He stopped almost 40 years ago, after all. And yet many believe his was an occupational injury. The truth is, Jimmy Ellis was much more than a boxer. He was a kind and good man. He will be missed by many people who don’t even like boxing.