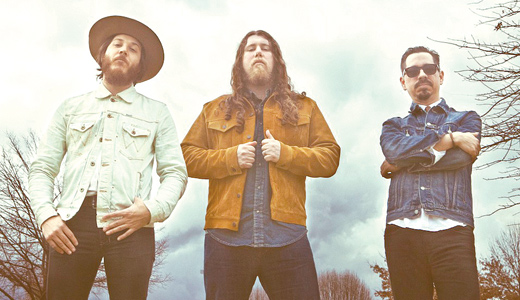 Some music was just meant for the summer, and Spanish Gold’s first album, South of Nowhere, is being released on May 27 precisely because it sounds like summer. The following night will find the band (whose drummer is from Louisville, though his two bandmates are both Texans) headlining WFPK’s Waterfront Wednesday concert series, spinning ’70s and ’80s-style groove-based rock to an adoring crowd of thousands. The crowd has consistently enjoyed the drummer, Patrick Hallahan, when he has played there with his other band, My Morning Jacket.

Though he expects to see smiling faces, “A lot of people haven’t heard any of this stuff before, which I find interesting and challenging,” Hallahan laughs, joking, “Hopefully, we won’t offend too many.”

It’s his first try with a new band in over a decade, and Hallahan says it’s been fun not only because he’s gotten to try new things, but because it’s also given him new perspective on his role with MMJ that he has brought back to that band. Their upcoming album, expected out later this year, was recorded after Spanish Gold finished their debut.

Hallahan met new bandmate Dante Schwebel (guitar, vocals) when Hallahan was hired alongside members of Schwebel’s band, Hacienda, to play together as The Fast Five, the backing band of Dan Auerbach (of the Black Keys), as Auerbach promoted his 2009 solo album. “We struck up a strong bond through that,” says Hallahan, who joined MMJ in 2003. “I had in the back of my head that I’d like to do something with them at some point.”

After Hacienda broke up, Schwebel found himself with a backlog of songs he had written. He called Adrian Quesada (guitar), who has played in the bands Grupo Fantasma and Ocote Soul Sounds and owns a recording studio in Austin. Quesada was a friend of Schwebel’s going back to their high school days in Laredo (a parallel to Hallahan’s relationship with MMJ leader Jim James, who he met in grade school in Louisville). “They were the two guys who made it out of a small border town and made a musical career for themselves,” Hallahan says.

The Texans got together and made some demo recordings. Schwebel kept Hallahan up to date on their progress, and then asked if the drummer would be into playing on some songs. “I’ve loved his songwriting from the get-go, and it seemed like they were going in a great direction,” says Hallahan, who then had time on his hands while MMJ went on a break after a long tour, and as James worked on his solo album.

Suddenly, a new band was born — though Hallahan didn’t meet Quesada until the band’s first day together in the studio. They recorded in Auerbach’s Nashville studio and Kevin Ratterman’s La La Land in Louisville, starting in November 2012, where “I was flying blind,” Hallahan says, “creating with someone I didn’t know — which was part of the allure. It was supposed to be a little side recording project, but it was instantaneous, the camaraderie.”

The album has already been reviewed by Rolling Stone, whose critic noted similarities between its first single, “Out on the Street,” and the ’80s hit “Somebody’s Watching Me” by Rockwell, while also comparing Spanish Gold to the Black Keys. “It was not an intentional move,” Hallahan notes about the Rockwell rhythm. “At this point in music history, it’s really hard to do anything that doesn’t sound like something that’s already been done.”

It’s not a new experience for Hallahan, whose 2005 MMJ co-write “Off the Record” was also compared to an earlier hit song, the “Hawaii Five-O” theme.

The good news about the album is, “My mom’s having a blast with it,” he says. “It’s definitely hookier than some of the stuff I do. It’s got more of a pop element to it, I guess.”

Spanish Gold plans to tour through the summer, including a performance on “The Late Show with David Letterman” on June 3 and a set at the Forecastle Festival on July 19. “It’s definitely grown some wings,” Hallahan says, laughing as he adds, “I didn’t plan on joining another touring band. But I’m a believer in this. It’s very honest music, it’s very fun music, and it’s a complete departure from what I’ve made with My Morning Jacket.”