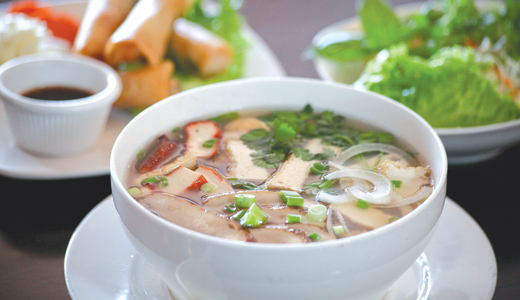 Roots, with its next-door companion Heart & Soy, is coming up on its third anniversary this summer, and both spots appear to be going strong, filled with happy diners nightly.

So how does that work, when neither upscale Roots nor street-food Heart & Soy offer so much as a bite of meat or a sip of booze? I think it has something to do with what restaurateur Huong “Coco” Tran calls Roots’ “mindful, compassionate cooking,” a plant-based cuisine so good that even the most obligate carnivore can chow down without even missing animal flesh.

The booze thing might be a stickier wicket for some, but as I see it, Tran’s brightly colored and boldly flavored dishes make your palate so happy that there’s no real need to crank up one’s attitude with an adult beverage. Anyway, you’re on Bardstown Road! A quick stroll in either direction will bring you to an after-dinner drink within moments, if that’s your pleasure.

Or go for a change of pace and tickle your mind with a different kind of psycho-active fluid. I’m talking tea here, and not just your mass-market Lipton’s but something from the extensive tea list, such as steaming, aromatic pots of Himalayan Mountain Tips, First Flush from Nepal or India, and Darjeeling Soom Estate. Tea makes everything better: That’s enlightenment for you.

I speak of “enlightenment” with conscious intent, as Zen Buddhism infuses Tran’s attitudes and inspires her “mindful, compassionate” approach to hospitality and fine dining.

She left Café Mimosa to start Zen Garden, the city’s first Asian vegetarian restaurant, in 1999, and then, nearby, Zen Tea House. In 2011, Tran returned to her original Highlands venue — restored after a fire — to open the classy, upscale Roots and the casual, street-food-focused Heart & Soy.

I’ve been a Tran fan since the very start, impressed both by her commitment to quality, affordable cuisine with a focus on sustainability, and by her equally strong commitment to supporting local and international charities through profit sharing and fundraisers.

Her annual Thanksgiving Eve “Customer Appreciation Dinners,” in which customers dine free but are invited to contribute to designated charities, have raised more than $35,000 for charities like Family Scholar House, Compassionate Service Society, Paws with Purpose and Hand in Hand Ministries.

Roots’ extensive menu is the same for both lunch and dinner. It’s a hefty bill of fare: more than 40 selections spread across soups, salads and a long list of “savories,” many of them based on Vietnamese traditions but also reaching out across Asia and, occasionally, beyond.

I found quite a few high points and only relatively minor disappointments over a dozen or more dishes in two recent visits. While I’m not in favor of over-salting, I have no objection to a hint of it in my fare, but the chef seemed to have lost his salt shaker one recent midday.

Japanese Eggplant ($9.50) stir-fried with onions and tofu in a curried coconut-milk sauce should have popped with flavor but came across as bland without salt; ditto a savory Vietnamese crepe ($6.50), stuffed with shiitake mushrooms, onions, bean sprouts and more, but a bit gummy with undercooking and, again, seemingly salt-free.

Pan-Fried Pot Stickers ($5.50) were a bit doughy and weren’t cooked quite long enough to form the crusty, caramelized spots that give this Asian treat its name; and an otherwise filling Tofu Clay Pot ($9.50) with wild mushrooms also suffered from the salt famine.

Fortunately, the missing condiment had reappeared on a return dinner visit, and the universe returned to an even keel.

A bowl of Pho ($5.50 small, $8.50 large), the iconic Vietnamese soup, was outstanding, from a complex vegetarian broth with such a rich flavor and fine texture that it could only be described as “meaty” to a carefully prepared mix of fresh veggies, tender noodles and the customary aromatic herbs alongside.

At least four of the two-dozen savories include the name “crispy,” and we tried them all. Apparently I’m an easy mark for crispy food. Certainly the crispy avocado and tomato rolls ($6.50), four tight pastry-wrapped cylinders fried golden-brown, were right on point; so was a signature entree, the crispy potato nest filled with veggies, tofu and veggie “ham.”