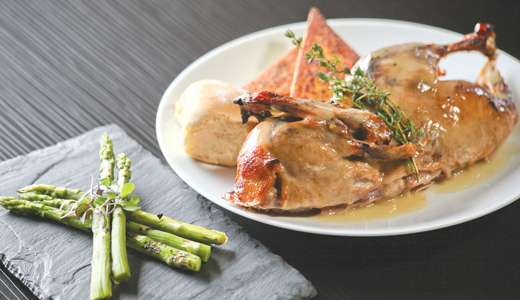 When baby boomers were kids, our parents overcooked our veggies until they were mushy and bland. A generation later, baby millennials got their veggies crisp and barely cooked, reflecting the then-trendy restaurant style. You’d think that by 2014, some kind of balance might have been achieved between the extremes of ’70s mush and ’90s crunch, but noooo …

Or, at least noooo, not as far as the otherwise excellent cuisine at the Highlands’ newish Loop 22 restaurant is concerned. We enjoyed a fine dinner there recently, but I couldn’t help noticing that it was mighty hard to find an asparagus spear, a brussels sprout or a chunk of carrot that didn’t go “crunch” when I munched.

Before we get down to this week’s review, the question must be asked: Whose parents were right? The keep-them-crisp wisdom holds that long cooking not only drains flavor and toothy texture out of veggies, but also saps their nutrients.

Modern research, however, questions that. Raw or barely cooked veggies retain most of their healthy fiber, and that’s not a bad thing. But longer cooking breaks down the plants’ cell walls, unlocking cancer-fighting antioxidants like lycopene and lutein. These magical goodies become available with some cooking time, and that might be an even better thing.

I’m not much of a scientist, but I can cook, and I’ll tell you this: Cooking veggies — within reason, anyway — can make for richer, more succulent texture; allow flavors to blend; and foster the Maillard reaction, bringing the tempting deliciousness of caramelization and browning to the dinner party.

Enough said! I like Loop 22. I like it a lot. But turn me loose in that kitchen, and I’d probably fire those veggies a little bit more.

Loop 22 takes its name — and some trolley-focused elements of its decor — from its location in the Douglass Loop, that odd circle just off Bardstown Road at Douglass Boulevard where the streetcar tracks used to turn around at the end of the line, long before the era when the youthful boomers were gumming Mom’s overcooked veggies. It opened earlier this year in the space that formerly housed the Corner Door, and, before that, Pink Door.

Loop 22 joins the popular Hammerheads and Game under the ownership of Adam Burress and Chase Mucerino, joined here by Eric Morris. All three of these guys worked in the kitchen at Seviche, and it shows in their attention to creative flavor combinations and skilled kitchen chops.

They describe the fare as “rotisserie and modern American cuisine, utilizing flavors from all over the world,” and that makes sense to me. Some of the heartier winter dishes are making way for more summery fare such as a Cornish hen fried whole; “BLT” ($10) fashioned from fried green tomatoes, bacon and a fried egg; country ham “sliders” ($8); and roasted bone marrow crab cake served in the bone ($15).

A Sunday brunch also launched on Mother’s Day, including an innovative bloody mary operation in which you build your own by checking off options on a table card. Finer weather has also brought a few patio tables, and a lunch menu should be available by the time you read this.

Enter through a large, comfortable L-shaped bar to find your way to the small but cozy dining rooms. As the bar suggests, adult beverages are a specialty, with short, well selected wine and beer lists, the latter all craft and mostly local, plus creative cocktails. I couldn’t resist a Foggy London cocktail ($10), a strange but delicious variation on the manhattan, featuring a chilled blend of Bulleit rye and sweet vermouth, Earl Grey tea and the bitter Italian digestif Fernet Branca.

We spread the table with small plates plus one large platter, rotisserie duck from Maple Leaf Farms in Northern Indiana. It’s $20 for half of a duck, which is still a lot of duck; a whole bird goes for ($36), and a duck sandwich is $12. This was fine duck: dark and earthy, juicy flesh within succulent but not crisp skin that apparently had been painted with a thin coat of sweet glaze.

A side of grilled asparagus was crisp and almost raw, not necessarily a bad thing with fresh asparagus. A warm brussels sprouts salad ($8) was built on quartered roasted sprouts, barely cooked through and still quite firm, tossed with mild goat cheese, almond “dust” and a citrus-tart dressing.

Veggie roulade ($14) featured barely cooked diced carrots and other veggies rolled in something like phyllo, placed on a bed of grilled asparagus and a gently sage-scented beurre blanc.

Peach bread pudding ($8), dense and rich, was served on a sizzling iron platter and topped with scoops of vanilla ice cream decorated with chocolate.

With the Foggy London cocktail and an $8 glass of Kermit Lynch Cotes-du-Rhone, a hearty dinner for two came to $81.60 plus a $20 tip.