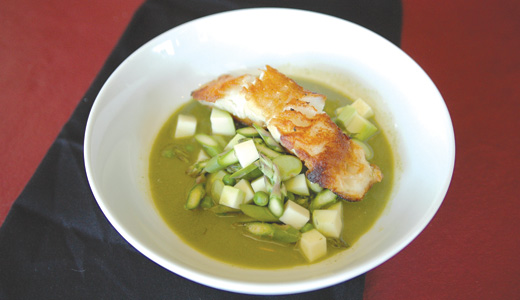 The nation’s gluten-free obsession is getting out of hand. What began as a dietary restriction needed for roughly 1 percent of the American population has become a $10.5 billion-a-year business. Everyone from those cookie-pushing Girl Scouts to vodka distillers has introduced gluten-free products over the last few years. The New York Times even reported that snack makers whose products were naturally gluten free — like popcorn — were rushing to add the label to their packaging in hopes of cashing in on the buzzword.

First things first: Gluten is a protein found in barley, wheat and rye. It’s what makes dough elastic. That thing affecting 1 percent of Americans is celiac disease, an autoimmune disorder where eating gluten causes severe gastrointestinal symptoms and can result in other serious medical conditions.

“There are more and more (gluten-free) products every day,” observes Carolyn Gilles Hannan, the marketing and events manager at Rainbow Blossom Natural Food Markets, which occasionally holds gluten-free fairs where customers can sample products and learn more about this controversial nutrition topic. “A larger group of people is generally curious about it,” she says. “They may try it out for a week or two and discover they feel better. Maybe headaches go away or digestion improves.”

Hannan doesn’t see that as a problem. Even if most of that group doesn’t suffer from celiac disease, they may still be sensitive or allergic to gluten. The scientific community is still debating whether gluten sensitivity is a real thing. Even if it isn’t and there’s no harm in gluten for the majority of people, what are they missing out on if they don’t eat it? Gluten doesn’t have a benefit other than convenience.

More of Rainbow Blossom’s customers are coming in looking to introduce not just gluten-free products into their diet but also non-genetically modified organisms (GMOs). Being the former doesn’t ensure a product is the latter, but there is a big overlap between the categories, because GMO is common in the wheat industry, says Hannan. Put another way: People are using the gluten-free trend as a gateway to less processed, more natural, more organic foods in general.

“A lot of people are just becoming more aware of what is in their food, reading labels, taking action,” she says. “Generally speaking, one of the larger trends is toward plant-based diets.”

None of that is bad. The only issue would be if people mistake “gluten free” as meaning “healthy,” because no, that gluten-free chocolate chip shortbread cookie from the Girl Scouts is still not good for you.

With a menu that is consciously 50-percent vegetarian and offers numerous vegan options, Ramsi’s Café on the World has long been accommodating of customers with specialized diets. It is no shocker, then, that this Highlands staple began offering and labeling their gluten-free options more than seven years ago. In the last year, they’ve added about 16 dishes that were specifically gluten free.

“It’s not really a surprise to me,” says Rhona Kamar, the restaurant’s chef and co-owner, who studied dietary theory at the Institute for Integrated Nutrition. “People are becoming more aware of nutrition in general.”

Kamar continues, “They (meaning most people) are trying it on for size. It’s just people trying to be healthier. One of two things will happen. Either it’s going to continue to keep going and it will go mainstream, or the mainstream people who don’t have issues with gluten will realize they are fine when they eat it and we’ll see a decline.”

Restaurants saw this with the low-fat, high-carb diets of the past. Back then, just as today, the role of the chef is to adapt with the people’s palette, she says. Modifying can be tricky, especially with certain products like bread, but there’s a challenge in that.

Maybe the lesson in all this is to curb our gluten-free backlash. Sure, if you are a dinner host, it is annoying to be forced to accommodate somebody who diagnosed themselves with a gluten allergy after reading a WebMD page, but in the grand scheme of things, there’s nothing wrong with some variety in people’s diets.

“It can be fun, a way to discovering new and exciting tastes,” says Kamar. “Some people have gluten issues. Some have dairy issues. Some are vegetarian or vegan. We really focus on these. We try to build a foundation (that anyone can eat) and then add things like meat and cheese. In a way, it’s less restrictive than if you are always cooking with meat or butter or cream.”