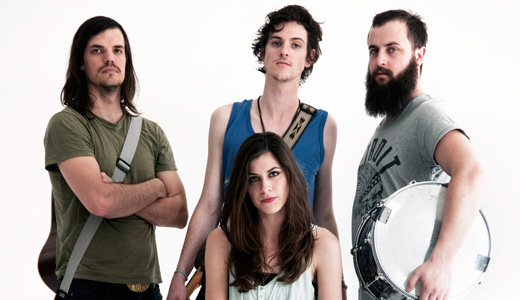 For New Albany’s Houndmouth, it boils down to a single set at Austin’s South by Southwest festival that the band was advised to skip. They caught the attention of a not-seedy booking agent, and the touring part of the story is happening now.

Houndmouth performs Sunday in a triumphant homecoming at the city’s Boomtown Ball & Festival, a daylong downtown celebration. We caught up with drummer/vocalist Shane Cody on the road a couple of weeks ago. He greeted us by saying, “It’s good to see a 502 area code.”

LEO: Ever wonder what would have happened if you hadn’t done that (SXSW) gig?

Shane Cody: They told us it would be a waste of time and money. We were like, ‘Well, we don’t really care. We want to play on the road.’ So we rented an RV and went down. We only had one official showcase, and the rest were in tiny clubs. It’s kind of weird to be touring all over the place right now.

SC: We only played once in New Albany. It was probably the smallest stage ever — it was basically like a drum riser … upstairs at what is now Dillinger’s. We played ZaZoo’s; Wick’s on Bardstown Road; Stevie Ray’s on Main Street; little tiny places with some family and friends there. And then it slowly kind of took off, and we did a secret show at my buddy Brett Hammond’s house, which is in NuLu. That was the first time, to me, it was like, ‘Oh man, there is a bunch of people here.’ We played on a roof out back. I’m excited to come back and actually play our hometown.

LEO: You’ve been on “Conan” and “David Letterman,” opened for Drive-By Truckers and the Lumineers and played all kinds of huge festivals. Why did you decide to come back to New Albany?

SC: We just wanted to finally play our hometown properly. Our homecoming shows were always in Louisville, because that’s where the venues are. Louisville has been very gracious to welcome us, even though we’re on the other side of the river. That’s usually not the case — there is usually a divide between Louisville and Southern Indiana. We just wanted to do it right. … I think it’s our fastest sell-out to date; I think it sold out in three days, which is crazy. We hope to bring some people over from Louisville to check out what we have to offer — over to the “Sunny Side.”

LEO: What memories do you hold of New Albany that makes it a sentimental place for you and the band?

SC: I was born and raised there. I live right downtown in my grandparents’ old house. My dad still owns the house; it’s the house he grew up in. Now I’m living in it; it’s my home.

LEO: I’ve read that a lot of the songs the band writes go back to living in a place where not a lot is going on. Now that you’re out touring and seeing the world, how do you think that might affect the band creatively?

SC: We definitely have all kind of written about different places. It’s just folk story writing. Now we’re going to experience these places we’re writing about. It’s helping us. Now we have more ideas, and they’re even more personal. Not that (previous songs) are not personal — there’s some of you in it even if you make it up. I think, coming from a small town, it’s fun to write about other places. A couple of our newer songs, we’re talking about newer places we’ve seen and our experiences there.

LEO: Your tour schedule looks pretty busy this summer. What are the plans for a follow-up release?

SC: Definitely soon. We were supposed to record in April, but the producer had something come up, so we had to postpone. So, right now we’re searching for our next producer of our next record. We’ve got a lot of new material, so we’re throwing new songs into our set now. It will probably be out early next year, if I had to guess.