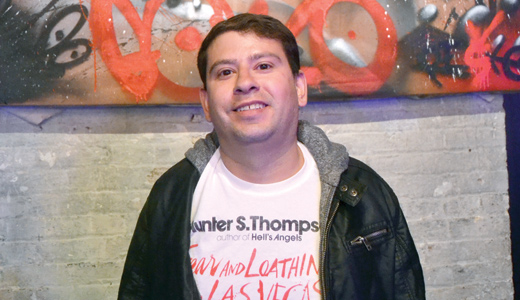 The first time I heard about Louisville and Kentucky happened when I was reading “The Kentucky Derby is Depraved and Decadent” by the creator of Gonzo journalism, Hunter S. Thompson. I was finishing a master’s degree in social communication in Brazil, where I’m from, and was reading “The Great Shark Hunt.” Thompson changed my conception about journalism.

I was teaching Hunter S. Thompson to my journalism students at a federal university in Brazil, but most of them already knew of him. Yes, since 2005, when Thompson died, six of his works have been translated into Portuguese, among them, the most famous — “Fear and Loathing in Las Vegas,” “Hell’s Angels” and “The Rum Diary.”

Brazilians who enjoy literature love Hunter S. Thompson, and they often ask: Why have we never had a journalist with such boldness here? Why not one Hunter S. Thompson in Brazil, a land that seems made for someone like him — where prostitution is free, where you can drink on the street without concern and where there is easy access to all kinds of drugs? This is one of the issues that brought me to the United States to research the life and work of the journalist. Thompson did spend close to a year in Rio. He got burned out and homesick, but he was there.

So, I arrived in New York in August 2013, where I was studying as a visiting scholar at New York University. In April, I was in Louisville and was surprised by the city’s relationship with Hunter S. Thompson: Nobody seems to know who he is. Upon arrival, I told the taxi driver I was in town to attend Gonzofest; he didn’t know what it meant or who Thompson was. So I went looking for traces of the creator of Gonzo journalism — The Highlands, home of his family; the public library where his mother, Virginia Thompson, worked; Cherokee Park; etc. The only reminder this city appears to officially keep about Thompson is Gonzofest, sustained and maintained largely by the will and passion of poet and longtime Thompson friend Ron Whitehead.

After Gonzofest, encouraged by some Louisville residents I had met since arriving in town, I went to check out Thunder Over Louisville on the riverbank. What I saw there was a scenario similar to the one described by Thompson in 1970 in the legendary story about the Kentucky Derby: thousands of people caricatured, similar to cartoons like “The Simpsons” or “Family Guy,” sans airplane shows and fireworks display artifices. The city maintains a decades-old tradition; however, the personality born in the city and who speaks about the city in texts read outside the United States is practically forgotten.

You may think in Brazil, Muhammad Ali would be more famous than Thompson, and I’ll answer: maybe. However, new generations know little about Mike Tyson. It is more likely they know about Ali through Thompson’s texts than through learning about him in other texts or books.

For these and other reasons, I felt something weird in Louisville. I found the same Louisville described by Hunter Thompson in his memoirs, which I read in Portuguese. Sometimes I saw the same American people who got carried away by the lies of Richard Nixon in two elections. And so, I think maybe it’s not just Brazil that needs a journalist like Hunter S. Thompson: maybe you do, too.

It’s pertinent to American journalism. However impossible the emergence of a new Thompson might be, the rereading of his texts is a big step that should be taken by all those who believe that, yes, everything is possible and all is not lost. And also to show that we (or you, the American people) are not all stupid: we are human; we each have soul. And that soul is not for sale — like it sometimes seems in the United States of America.

Eduardo Ritter is a Brazilian journalist, doctoral degree student at PUCRS (Brazil), visiting scholar at New York University, and on scholarship from CAPES in Brazil.