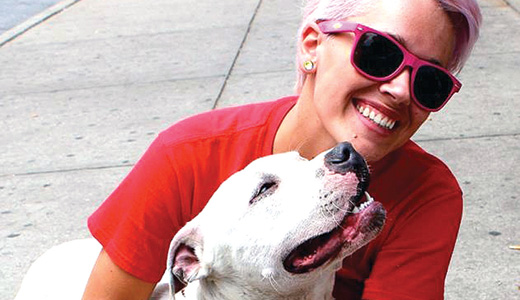 As one of the co-founders of Saving Sunny, a local nonprofit focused primarily on the rescue, rehabilitation and re-homing of “bully breeds,” Westbrook has long battled against the stereotypes held about dogs like the American pit bull terrier or Rottweiler. Now, her nonprofit’s latest offering is taking this open-door attitude of nondiscrimination and applying it to a whole new group: owners.

Earlier this month, Saving Sunny launched the Community Dog Resource Center, a half-day pop-up shop at the Portland Community Center designed to help nearby residents support their four-legged companions by offering free pet supplies and resources they might otherwise not be able to afford or access. This included free dog food, leashes, collars and flea and tick preventive medicine. The idea is that this additional support will keep owners from surrendering or abandoning their dogs, which would lower the number of animals entering — and eventually being euthanized by — Louisville Metro Animal Services.

Too often, says Westbrook, animal welfare activists are hardened by the horrific cases of abuse and neglect they have seen firsthand. That can evolve into a distrust of anyone who cannot take perfect care of a pet. “Sometimes people don’t have the resources,” she says. “Sometimes they don’t know what the best thing to do is. But everyone wanted to tell us stories about their dogs. They love their pets. They deserve the companionship of a pet.”

For the CDRC, Saving Sunny decided not to require proof of income, proof of vaccination or any other details that might scare people away. Though intended to target the Portland neighborhood because their data crunching showed its 40212 as the origin of the most animal surrenders or pickups from animal control, attendees didn’t have to be official residents. Here again came a non-judgmental approach that trusts people who say they need a little help.

Some of the pet owners had unintentionally inherited their pets from family members or friends who’d been incarcerated. Others had fallen on financially tough times, or were living off disability or federal assistance. “Some people felt really embarrassed” about being at the CDRC, says Westbrook. “I wanted them to feel better. Don’t see it as a handout.”

Whatever the circumstances that led them there, Westbrook and volunteers found that the majority of owners wanted to do the right thing. Of the 54 people who attended the inaugural Community Dog Resource Center, 33 signed their dogs up to get spayed or neutered. One reason given for having not already gotten their dog fixed: lack of transportation.

“There seems to be this undertone that low-income people don’t want to spay or neuter. These communities get a bad rap,” says Westbrook. “It’s a resource desert out here. There’s one vet in 40 blocks. A lot of people don’t have cars. They can’t take their dog on the bus. What can they do?”

Volunteers did hear some of the usual reasons for not wanting to spay or neuter — things like “I don’t want to take away his manhood” or “I want her to feel the joy of having puppies” or the troublesome “I’m thinking about breeding.” However, for the most part, people were receptive. Many hadn’t heard about the health benefits of neutering your dog, or the positive impacts it can have on animal behavior.

Saving Sunny will arrange transportation from Portland to the Kentucky Humane Society’s SNIP Clinic. Similarly, volunteer behavior specialists will visit all the pet owners who signed up at the CDRC for free in-home behavior training. “We’re helping people who feel like they might need to get rid of their dogs,” explains Westbrook. “We’ll try to turn the situation around.”

The CDRC was made possible by a $10,000 grant from Best Friends Animal Society, a Utah-based national no-kill advocacy group. Westbrook hopes future data from LMAS will show a decrease in animal surrenders from the Portland area, providing Saving Sunny with empirical proof that can be used to secure more grants or corporate donations.

Margaret Brosko, the senior manager of special initiatives and communications at LMAS, expects the effect of the CDRC to be felt. “We see a direct impact whenever we (as a community) do things like this,” she says. “What they’re doing is absolutely huge.”

The idea for the CDRC is a result of Saving Sunny realizing that their rescue efforts, while important, were only attacking the symptoms of the community’s animal population problems rather than the root causes. According to Brosko, LMAS has been making similar efforts to focus on stopping animals from getting into their system in the first place.

More than 6,000 stray animals enter the shelter every year. Most are not wearing any sort of identification. LMAS is currently pushing the benefits of licensing your pet. Of the estimated 300,000 companion animals in Louisville Metro, only 17 percent are registered, according to Brosko.

Over the past year or two, LMAS has equipped all of their animal control vehicles with mobile data terminals that let officers enter the tag of any collared animal they find during their rounds. This provides them with an associated address, where they take the cat or dog immediately in an effort to bypass the physical shelter and help the owner avoid the fees and headaches associated with reclaiming their lost pet. It’s an obvious and immediate step in helping reunite owners with their lost pets quickly.

Likewise, giving out free collars to owners who might otherwise not feel compelled to buy one lets the community know the animal has a home, and if there’s a tag on said collar, helps bring the animal back home if lost. Sometimes simple solutions have big impacts.

Adds Brosko, “Pointing people in the right direction is crucial.”