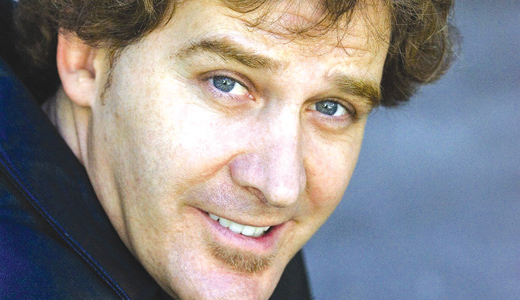 Jim Florentine and Brad Thacker are comedy BFFs, the kind of friends who sit on the same side of the booth at Waffle House, feeding food into each other’s mouths.

“It’s a romantic setting,” says Florentine, while on the line with Thacker and LEO. “If we were in an Applebee’s, we’d sit across from each other …”

Comedian, actor and writer Florentine keeps busy, but he and Thacker always team up when the opportunity comes. When Florentine’s not interviewing rock stars on VH1 Classic’s “That Metal Show,” he’s channeling his rants into a weekly podcast, “Comedy Metal Midgets,” which has nothing to do with little people. He’s also appeared on “Californication” and “Girls.”

Florentine is readying for his first hour-long special this July. Fans can also look forward to seeing his hidden camera show “Meet the Creeps” on Netflix in the coming weeks — the same show that was rejected by Comedy Central in 2007 for being “too mean.” It’s a concept not far off from Florentine’s Terrorizing Telemarketers collections, or his voiceovers on “Crank Yankers.”

LEO’s interview with the two comedians eventually devolved into a back-and-forth between friends, including some delightful music banter too lengthy to print here. Tonight, they bring their edgy, aggravated take on comedy to the Laughing Derby.

Jim Florentine: I like Southern rock. Lynyrd Skynyrd is one of my favorite bands. Bob Seger, Kid Rock.

JF: I love Kid Rock. See him live and you’ll change your mind. (And for good reason: Florentine met his wife at a Kid Rock concert.)

BT: I wouldn’t see him if he was playing across the street from my place and it was free.

JF: Brad comes from the grunge era, so he’s not allowed to like anything except grunge.

JF: Brad grew up in the grunge era. He likes a little older metal, but he likes nothing after grunge. He’s like 10 years ahead of all the guys I hang out with. “There’s no good bands anymore.” And I’m like, ‘Yeah, there is. Get off your ass and look for them.’ “No, they don’t play music like they used to.” Yes, they do. You just don’t know where to find it. You’re too lazy. You’re too busy posting on Facebook.

LEO: That’s what I like about “That Metal Show.” You can talk about the new music and projects coming from these older bands.

Strange sounds came from Florentine’s phone line, signaling the end of our call.

JF: My son is dropping a deuce and I’m helping him with it.

BT: He learns from the best. Did you teach him the top tank yet?

JF: No, not yet. He will sooner or later.

LEO: What is the top tank?

(Following the interview, Thacker tells LEO, “He’s one of the deepest dudes I know.”)