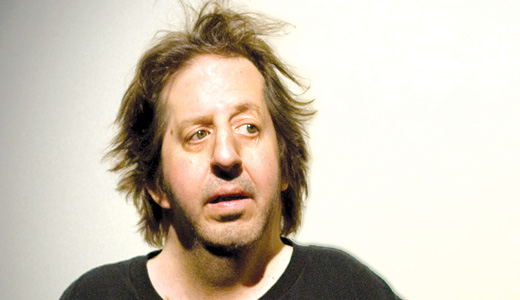 Chris Anger has been a fixture on the Louisville theater scene for many years. Most notably, he is one of the co-founders of the Louisville Improvisors, and he has spent more than a decade putting together the annual Improvapalooza festival. Last year, in the wake of near tragedy, Anger rose from the ashes with a semi-funny/semi-tragic one-man show titled “Dead Astronauts.” He premiered it at the Slant Culture Theatre Festival in November, and due to popular demand, he will perform the show one more time for a special engagement at The Bard’s Town.

LEO: What’s the story of “Dead Astronauts”?
Chris Anger: It’s a one-man show based on my experience. I started to have chest pains about a year ago, and I had to go to the hospital, which started a chain of events. And sometimes, when you’re lying in a hospital bed hooked up to all of these machines, it can really focus your thinking. So I started thinking about family history, things I kinda knew but didn’t really know in any concrete sort of way.

LEO: When you’re down, write about it — was that your logic?
CA: I had been thinking about doing a one-man show for a while, because I had done various other things, you know, I had written for years. But I didn’t know how to tell the story and what story to tell. So I started writing in the hospital, and when I got out, I looked at it, and suddenly knew how to tell the story.

LEO: It’s personal and deals a lot with your family?
CA: What I found out, it’s in a line in the show: “I come from a long line of comics … and heart trouble.” Even though I knew this, and my father had told me all the stories when I was growing up, I didn’t realize how far back it actually went, and that they had all done comedy and that they all died of heart attacks. So I was in the hospital and I was like, “Oh, so maybe there is a genetic component to all of this.”

LEO: Was it hearing all of those stories growing up that led you down the road of being a performer?
CA: It’s kinda funny. Hearing the stories was interesting to me. I was certainly fascinated by it. I remember listening to my grandmother tell stories. So, it didn’t hurt, but I don’t think I had a choice. I was always this way, even as a child.

LEO: Alec Volz has been your partner in crime with Louisville Improvisors for many years, and he’s directing the show. How does someone contribute to something so personal to you?
CA: He was really helpful in structuring it, saying, “Let’s put this piece here, that piece there,” and forming a cohesive story. We’ve been working together for 15 years, so he knows me really well. He knows what I can do, and he knows me personally. So when I send him stuff, he knows what I’m trying to achieve and knows me well enough to know if I’m there or not.