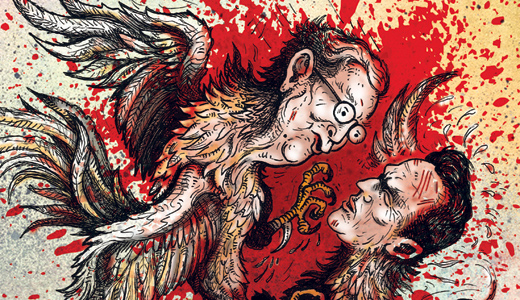 Last Wednesday, the morning after a slew of Tea Party candidates were stomped by their establishment-backed Republican primary opponents, conservative radio host and conspiracy huckster Glenn Beck asked Matt Bevin to assure him the same thing wouldn’t happen to him in two weeks, when Kentucky Republicans will finally choose between Bevin and their 30-year incumbent, U.S. Senate Minority Leader Mitch McConnell.

I regret to inform Mr. Bevin and his Tea Party supporters that unless God comes down from heaven and rigs the ballot boxes personally, that will not happen. Bevin is going to lose, and it’s not going to be close.

Many said Bevin’s defeat was a foregone conclusion once he entered the race last summer, as McConnell just had far too much power and money to be taken down by his own party and a political newcomer. They may very well have been correct. But while Bevin was certainly a long-shot to pull off the upset, there was also a route for his candidacy to at least be able to make the race competitive.

On the one hand, a competitive race did not emerge because Bevin ran an absolutely dreadful campaign full of strategic errors and self-inflicted wounds, the most notorious and ridiculous of which was getting caught lying about participating in a rally to legalize cockfighting in eastern Kentucky. On the other hand, Bevin had trouble making this race competitive because what was known as the Tea Party of 2009 and 2010 had already won the Republican Party.

For example: Off the top of your head, try to think of a current policy position held by McConnell that differs from the typical Tea Party position. Unless you listen to Beck on repeat or religiously read far-right blogs, it’s probably hard to come up with one quickly. McConnell and his fellow establishment colleagues in Congress have moved so far to the right in recent years that moderate Republicans willing to find common ground on even popular issues — like immigration reform, increasing the minimum wage and equal pay for women — are now sighted less than Bigfoot.

Along with this shift, most Republican voters formerly identifying with the Tea Party have lost interest in the movement’s remnants, which now consist of a deeply paranoid fringe that is completely out of step not just with the general public, but also with Republican voters on many issues. Look no further than Sen. Rand Paul on this development, who — while still having serious disagreements with the GOP establishment on some issues — feels comfortable aligning himself with McConnell and Mitt Romney donors, for both ideological reasons and strategic considerations looking ahead to his presidential run.

Are there still people fretting over Obamacare death panels for Grandma and United Nations Agenda 21, who view Glenn Beck as a prophet and Republicans like McConnell — who aren’t 100-percent pure to extremist tactics like shutting down the government — as progressive socialists who are actually in cahoots with Obama, if not the Muslim Brotherhood? Yes, and that is now a standard constituency of current Tea Party movement activists. The problem is — and many polls confirm — that there just aren’t too many of these people left, even among a Republican primary electorate.

This new landscape explains why Bevin’s main campaign themes and lines of attack on McConnell — which Tea Party primary challengers were able to use effectively just a few years ago — were such a dead end. Bevin’s campaign strategy was to try to paint McConnell as someone who enabled Obama to preserve the Affordable Care Act and wage a so-called “War on Coal,” which might have played well with some Tea Party activists and groups, but not with most Republican voters in Kentucky who were paying attention to reality. Other lines of attack by Bevin — such as citing McConnell’s previous love of earmark spending and obscure, decades-old votes on “amnesty” and abortion — were like trying to tackle the long-forgotten Ghost of McConnell Past.

Bevin was able to receive the endorsements of a wide range of national Tea Party groups like FreedomWorks and the Senate Conservatives Fund, but these groups did not wind up throwing as many resources into Kentucky as his supporters hoped. These groups did manage to raise large amounts of money for themselves in daily fundraising emails asking people to stand up to the “RINO” McConnell, but like many Tea Party groups in this era, they kept a good deal of that money and didn’t flood the state with TV ads for Bevin.

However, there were still available paths to attack McConnell’s weak spots on issues where much of the Tea Party movement is gaining strength with GOP primary voters, yet Bevin missed this opportunity.

Bevin rarely emphasized McConnell’s long and unapologetic history of supporting the Patriot Act and NSA domestic spying programs, which continues unabated to this day. Not only could Bevin have legitimately portrayed McConnell to GOP voters as someone enabling the dreaded Obama to spy on their emails and phone calls, but this issue could also have enabled Bevin to drive himself in between McConnell and Rand Paul like a wedge.

The transparently cold and calculating endorsement of McConnell by Paul brought some awkward moments for the odd couple during the campaign, but these could have been multiplied a great deal if Bevin consistently emphasized what is probably Paul’s signature issue.

Bevin also could have used the 2008 Wall Street bailout against McConnell — who called it one of the Senate’s “finest moments” — if only he weren’t such a flawed candidate to send that message. Bevin mostly shrugged off McConnell’s attacks about a government loan his business in Connecticut received, but Bevin’s career in the same financial services industry that benefited from the 2008 TARP bailout is what did him in.

Bevin’s tortured excuses for signing a 2008 letter by his company praising TARP’s effect on his industry neutralized the issue, as McConnell used the Karl Rove tactic of attacking your opponent on your own greatest weakness, labeling him “Bailout Bevin” in an endless string of attack ads.

Flailing around to find an issue or constituency to gain ground on McConnell, Bevin stumbled into perhaps his biggest blunder of the campaign: the now legendary cockfighting scandal. While Bevin repeatedly insisted he spoke at a “states’ rights” rally where cockfighting was never mentioned, hidden camera video by WAVE-3 showed the rally’s sole purpose to be combating federal legislation criminalizing cockfighting, with Bevin telling the crowd that Kentucky should be able to decriminalize the bloodsport since it is part of our “heritage.”

All of these factors simply reinforced the narrative of the McConnell campaign: that Bevin is a fake conservative who is willing to say and do anything to get elected. The effectiveness of this tactic is made all the more interesting by the fact that many look at McConnell’s career and describe him the same way, as a politician with no true ideology who will shift positions with the political winds whenever it serves the purpose of gaining and holding onto his own power.

As early as the night of May 20 — when McConnell will give his victory speech — we may very well see McConnell shifting again, as he could pivot back toward the ideological center for the general election, after several years of courting Tea Party support in order to avoid becoming the next establishment Republican purged in a primary. Though the original 2009 Tea Party crowd may well have won control of the GOP agenda for now, some victories don’t last very long.