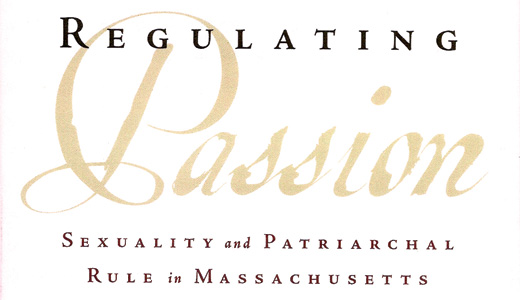 If someone said, “Part of the book is about society insisting on marriage for women, denying them power and authority over their sexuality, and women’s refusal of these policies, including participating in sexual behavior that opposed patriarchy,” I might, in my ignorance, suppose the book focused on modern times. Turns out, these battles of sexual policy — including extramarital, premarital and interracial relationships — were being debated in America before the United States was the United States.

Kelly Ryan’s first book, “Regulating Passion: Sexuality and Patriarchal Rule in Massachusetts 1700-1830,” shows readers how in colonial times, attitudes (as well as policies, laws and punishments) surrounding sexuality were used to carve out power structures regarding race, class and gender that would be woven into the fabric of our burgeoning nation.

An associate professor of history at Indiana University Southeast, Ryan’s book is full of statistics, research, charts and facts. It’s a dense read, but you needn’t be a scholar to pull information from each page and consider how the details of 18th-century life impact our attitudes regarding sexuality today.

The colonial concept of white male superiority, and the assumed advantage over African-Americans and American Indians, was seen as essential to establishing the ruling party, even as these attitudes were repeatedly challenged and opposed. For example, around the time of the American Revolution, and debates on who would be allowed citizenship in America, African-Americans protested the breakup of families, and American Indians fought the guardianship system.

Focusing on one state, Massachusetts, “Regulating Passion” lays out how, essentially, single women, poor white men, African-Americans and American Indians were deemed criminals for certain sexual practices. But this pressure from the elite was resisted, and in parts of the book, the fear from the ruling class is clear. With real-life examples for nearly every point made, it is fascinating to take in stories of individuals pushing against laws, which often carried much harsher consequences than the rules of personal sexual conduct battled in the 20th century.

Reading this book, I am reminded yet again how young our country is. America is only 237 years old. If a lifespan is 79, that’s only three lifespans. Young! Of course, the attitudes on sexuality present in colonial life still exist in the United States. It would be foolish to think otherwise. So, in a way, maybe my first assumption was right. This book is about the Massachusetts ruling class of the colonial era using sexuality (specifically the sexuality of groups other than rich white men) to strengthen their power, but maybe those battles speak to the sexual revolutions that followed.

People in powerful positions have used an individual’s sexuality to ostracize them in colonial times, in the sexual revolution of the 1920s and in the sexual liberation of the 1970s. If you look at current legislative debates, one could argue there is still evidence of this in America today.