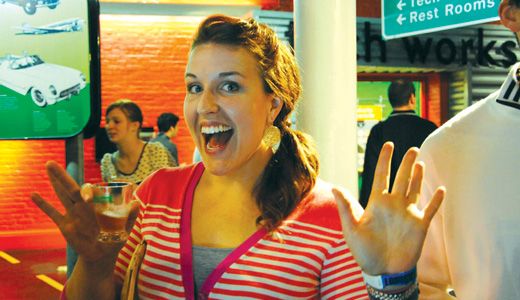 Science can be fun!

It’s a rainy Wednesday evening, and Levi J. Beverly is talking to a standing-room-only crowd at Against the Grain about scrotal cancer. See, back in 1775, somebody noticed that former chimneysweeps seemed to get scrotal cancer more than other dudes. That’s when people started to figure out that, hey, maybe this cancer stuff could be caused by environmental factors.

All this isn’t exactly traditional dinnertime or bar conversation, but aside from one or two raised eyebrows from the few customers who were only half-paying attention, nobody here seemed to mind. Most gathered here tonight specifically for this.

This is the inaugural meeting of “Beer with a Scientist,” a new monthly series designed to educate the general public on scientific topics they might be curious about. Unlike a formal lecture series one might attend at the University of Louisville, where Beverly works as an assistant professor in the medicine and pharmacology and toxicology departments, this series is boozier, meant to be more approachable to the Average Joe. Tonight’s topic: cancer.

Beverly modeled Louisville Underground Science — that’s the official name of the group that hosts “Beer with a Scientist” — after a similar club and monthly series held in Brooklyn, which he attended while living in New York City.

In approximately 30 minutes, Beverly cruises through the history of cancer research — from making the connection between those poor chimneysweeps and their developing bodies, through some gruesome but morally questionable experiments done on patients, all the way to today’s statistic that more than 70 percent of cancer patients survive. Throughout, he sprinkles tidbits the average person might find relevant to their own lives.

Transcribed, it would read like a Frequently Asked Questions page, and that is kind of the point. People want to know this stuff but often don’t have anybody on hand to ask. Turning to the Internet comes with its own share of problems. Media articles are too often science as dumbed down and filtered through the eyes of a journalist or blogger who is untrained (at least in the field of science). Legitimate science information might be too legitimate and be written with too much intellectual jargon for the average person to mentally digest.

“People in my position, we are usually surrounded by like-minded people all the time,” says Beverly. “We lose sight of the fact that most general people have never even met a Ph.D., never talked to one. Whenever I go someplace, if I strike up a conversation at a bar and I tell someone what I do for a living, they always have questions. It leads to a whole conversation.”

Bridging that gap between the general public and the small percentage of people doing fascinating, potentially life-changing research is one small part of making the world a better, more informed place. Beverly says he considers it his professional obligation to reach minds beyond the students sitting in his classroom.

Plus, it wouldn’t hurt for the term “scientist” to be updated for the year 2014. Beverly says one priority of his for “Beer with a Scientist” is to only bring in educated folks who can actually relate to the general public — none of those gray-haired stodgy dudes who’ll talk over or above you.

He adds, “I want to bring in people you might look at and say, ‘That’s a scientist?’”

Beverly fits that bill. He’s far from being gray haired, and he doesn’t look like some nerd who walked off the set of “The Big Bang Theory” either. He seems comfortable in front of a crowd, cracking jokes between gulps of beer. As he wraps up his prepared notes, he opens the floor for questions.

The second question: “Do you want a shot of Fireball?”

On a recent episode of his new HBO show, “Last Week Tonight,” John Oliver criticized mainstream media’s reporting of a Gallup poll that found one in four Americans is skeptical about the effects of climate change and believes the issue has been exaggerated. “Who gives a shit?” the former “Daily Show” correspondent asks. “That doesn’t matter. You don’t need people’s opinions on a fact. You might as well have a poll asking which number is bigger, 15 or 5, or do owls exist, or are there hats?”

This is what happens in a culture where everything is politicized and media gives platforms for pseudoscience in a pathetic attempt to seem balanced. Misinformation spreads. The masses accept it; they teach it to their young. Is it any wonder then that even well-meaning people get confused about what to believe on scientific issues like climate change?

Beverly isn’t the only one bothered by that.

For years, the Kentucky Science Center has held a series of seminars and events specifically for adults. Their seminar series, called “Scientific Proofs,” has included expert panel discussions on everything from childhood obesity to equine science. Meanwhile, their events are participatory experiences meant to engage and excite, something the center staff hasn’t restricted to any age group.

Kentucky Science Center marketing coordinator Hannah Clore says the center noticed a gap in attendance. People visited as children, then stopped, then came back once they had children. “We are trying to remind people that science is something we do every day,” she adds. “Science is all around us and we should all be innately curious.”

The adult series includes the popular “exBEERiment,” which teaches people about the science of brewing. Last week, the adult series wrapped up with another well-attended event, “megaBITE,” which combined eating local foods with learning about the science behind foods in a very Alton Brown/“Good Eats” way. According to Clore, both events are tentatively scheduled as a part of the next adult series, which will launch in October.

Back at Against the Grain, Beverly takes his last question of about half a dozen. It’s about epigenetics and whether it affects cancer treatments, which means that the person asking obviously knows a thing or two about science already. Beverly isn’t fazed, beginning his response to bring the rest of the crowd in: “First, what is epigenetics? Epigenetics refers to genetic changes that aren’t mutations …”

Not surprisingly, the majority of the crowd tonight is U of L students or people related to its work in the sciences. Beverly says he hopes word of mouth from tonight and some additional social media marketing will help diversify the crowd at future events. Next month’s outing, scheduled for June 18 at Against the Grain, will feature assistant professor Jill M. Steinbach of U of L’s bioengineering department discussing nanotechnology and how it might be used to combat virus infection. July’s topic will be about the aging process and whether it really can be outsmarted.

As Beverly wraps up his epigenetics discussion — an involved answer that I think boils down to “yes, it can” — the crowd heaps on the applause. Beverly reminds everyone that he is happy to answer additional questions or further discuss cancer on an individual basis. With no requests right off the bat, he grabs his beer glass and beelines to the table in the corner.

It’s time for that Fireball.