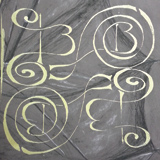 Black Birds of Paradise arrive fully formed on their debut, merging elements of jazz fusion, surf rock and pastoral folk under the banner of prog-leaning psych rock. This must be the work of music school geeks gone rogue — you won’t hear such expert chord changes out of any local peers, and they set themselves apart in the timbre department by way of a prominent vibraphone. So prominent, in fact, that it threatens to drown out the real action on tunes like “Western Song,” which features some sweet guitar licks that aren’t given the front-and-center treatment they deserve. There’s also a fair amount of humor here, but that humor can be hit or miss; the B-movie screams on “Cannibal Song” feel appropriate, but cringe-worthy lyrics on the knowing “Let’s Make Sex Together” undermine what is otherwise a killer instrumental.