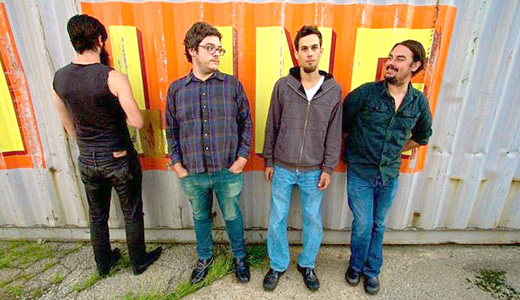 Axel Cooper spent most of his 20s in Louisville, playing with Tyrone, Instant Camera, The Phantom Family Halo and Sapat. But after he rounded 30, he found his life changing rapidly: expecting his first child, out of the city and farming in small-town Ramsey, Ind.

He wrote the songs for the first New Mother Nature album in 2011 while anticipating the baby, expecting he would soon no longer have a spare second for music. He asked guys he had played with before to help out. The quartet of 30somethings — Cooper plus Neal Argabright, Kevin Molloy and Corey Smith — quickly jelled. “They were all no-brainers for people to help make the songs build into something recordable,” Cooper says.

A one-time recording session led to shows, and now a second record (called 2 to distinguish it from the first album). This time, the band worked on songs together, changing the energy if not the overall sound of the lo-fi/rural rock band.

“There is still the underlying theme of social and environmental despondence. But in this new version, all four members of the group have drawn on the yoke simultaneously,” Cooper wrote in a press release.

They had more time — months instead of a weekend. Cooper learned he could juggle music, family and work. (In Ramsey, he farms, and while he has focused on vegetables in recent years, his wife has been having success lately with flowers.)

“I feel less and less connected” to Louisville, Cooper says, though he’s here often for farmers markets. Songwriting lets him communicate feelings he wouldn’t otherwise be able to share. These days, his focus is more on the natural world. He’s “not letting go of the dream,” he says, just making music for himself first now. He elaborates, “The members of this group would more likely say they are engaging a part of their brains that, if left dormant, would fester and discolor their personal lives.”