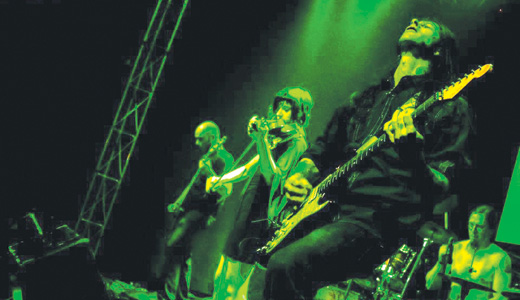 Bringing people together through metal

After a decade, another chapter in the saga of (ohlm) concludes with the release of their new album. A release show is planned for the Highlands Diamond Pub on Saturday.

LEO: Can you tell me about making the new album?

Nate McDaniel (guitar): Making the album took a lot of time, over two years with tracking and mixing. It really shows in the songs. We added tons of new instruments: xylophone, singing bowls, various percussion instruments, banjo and on and on … (ohlm) really wanted to go orchestral as much as we could on Centralia A.D.

LEO: There are metal bands, and there are post-rock bands — you don’t totally fit into any one sound. Is that intentional?

NM: We love all kinds of music, especially metal. And yes, metal is what brought us all together. Me and the drummer Josh (Abbey) were in Antikythera when we met our bassist Dave (Roberts), who was in Sowing Discord. Both of those bands were crushing and probably the best tech metal bands to ever hit Louisville, but we didn’t want to do that in (ohlm) … Our goal was to not be cornered stylistically. To be honest, I don’t even really know what post-rock means.

LEO: What do you have planned for the release show?

NM: We have some goodies lined up for the show … We will be filming in HD for a future live DVD. It will be the first time we have screened our new projection video, which I’m very excited about.

LEO: What goals does the band have now — touring, playing more locally, maybe scoring a movie?

NM: Touring, for sure. Locally, we try not to over-play. I’m very against that. As of now, we almost have the next story/full-length laid out, a split and the concept for an EP. So we’re pretty busy writing. Scoring movies and video games is a goal. It’s actually where we always saw (ohlm), but I’m not even sure how to break into that market. Other than that, we’ve been trying to learn “La Villa Strangiato” by Rush for years now. Maybe that will pan out soon.