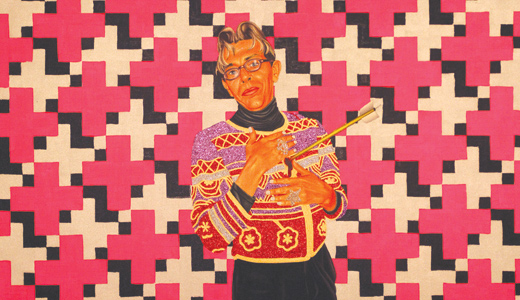 “Too Wild for Mass Consumption” — that’s what Lexington artist Patrick Smith posted on his Tumblr last December as he worked on the series of paintings opening this week at Swanson Contemporary. Smith’s subject matter is mainly his peers, a sometimes-troubled gang of bohemian Southerners who celebrate what he calls “a really eccentric sex life … promiscuity, but safe promiscuity.”

Smith, 27, began painting when he was “pretty old, actually, like 19. It was something I started doing, and then I could do it for as many hours as I had in front of me. That was different than most things I had tried to do.”

The largely self-taught Smith threw himself into his new love of painting. To make something new, he’s learned, he’s needed to use new materials. “I use the highest-end kind of non-traditional materials I can get. So I have DayGlo that’s, like, industrial, and it looks like it. I use aluminum paint, and then I use a variety of different glitters.”

Gallerist Chuck Swanson came into his life after a few years of showing work in “less official venues,” as Smith calls it. “There was this moment where I really needed something to change in my life. And I thought, ‘I’m going to get a show at a gallery, and then that will be Act Two of where I can go.’ And it worked! … I just walked in and said, ‘Can I get a show?’ and he said, ‘Sure,’” Smith laughs, clarifying that Swanson agreed after seeing Smith’s portfolio. “It was not an arduous process.”

One piece that’s on view in this month’s loosely heaven-and-hell-themed show is “St. Ursula,” a favorite of many who saw it in progress. Smith thinks that one worked especially well because “it was a piece that had layers of experimentation — and every layer worked.”

If there is an intentional theme running through the show, he says it’s a reflection of his collaborations with photographer/sculptor Bob Morgan. More than half of Smith’s show came from drawings Smith did over Morgan’s photographs. “Those are definitely the more homoerotic parts of the show,” says Smith. “Not all of them, because I take homoerotic photographs, too,” he adds, laughing.

Smith knows it isn’t common in Kentucky to see such bold depictions of male bodies in art galleries, but “I’ve found that people get that — I haven’t had a hard time explaining that to anyone,” he says. “It’s pretty unprecedented, but we’re just going with it and seeing what the response is going to be. And I’ve gotten exclusively positive responses from people. And largely from the feminist community, actually, who’ve been relieved to see naked men (instead of women).”

Six of Smith’s pieces have been purchased by 21c Museum Hotel, whose Louisville location features a statue of the naked David out front. Smith notes that his show goes further by depicting erect nudes. But he ensured that the effect wouldn’t seem like a cheap ploy for attention. “There’s a lot of layers to them. So you can’t say, ‘Oh, Patrick’s trying to have a hit show by having a bunch of naked men on a canvas.’”

So who does he do it for? “Wild people. I’ve found that what I want people to do in front of a camera is something that is on the level of ‘wild’ that … I can call it ‘realism,’ in how I experience people in my actual life. I don’t want anything sanitized. And I’ve found that the models who know what that is are also living an extremely wild life. So they just act like themselves, and I take a picture. I know a lot of them personally.”

Is he as wild, or a voyeur capturing moments? “I’m definitely wild,” Smith says. “Yeah. Definitely.”