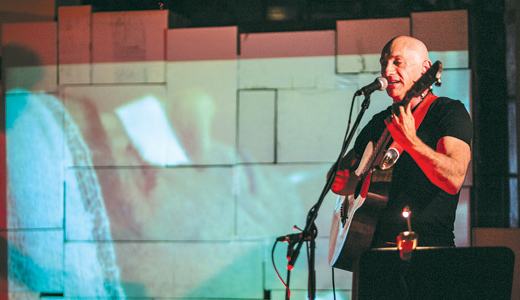 When his two ex-lovers died of AIDS within two months of each other more than two decades ago, Dudley Saunders had a strange realization: Nobody who remembered them together was still alive. The memory of their time together now existed only in his mind — and in the objects they left behind. From then on, Saunders was fascinated by this uniquely human desire to hold onto dead loved ones by hanging onto keepsakes that might otherwise be worthless.

How can you explain why an old spoon is important?

Saunders explores this concept with “In These Boxes,” a transmedia performance that blends live music, video and community photos. First comes a hallucinatory audio-visual performance that reimagines the missing lives behind the objects they left behind. Following this is a barrage of photos featuring additional objects, all of which were solicited from the community at large via email and the Instagram hashtag #InTheseBoxes during the weeks and months leading up to the performance.

Behind each photo are real stories and people, though not all of them fully documented. Some were submitted publicly and proudly, with long descriptions of their significance and the people associated with them. Other photos were shared privately, without any explanation or name attached to them. Collectively, they reveal a more honest, if less direct, representation of our dead than any newspaper obituary pages or engraved headstone ever will.

In addition to incorporating these photos into his live performances, Saunders is featuring them for perpetuity on a website, which he calls “an online cemetery.” Among the objects featured: a handkerchief held tight by a granddaughter, a rainbow necklace made of cheap plastic beads, and an old-timey coffeepot still in use.

“We hear stories of people who had heroic lives. Most people’s are small,” he says. “How do we bring that richness forward? If 99.9 percent of people lived small lives, then telling their stories is what matters. … Some did well for themselves. Some couldn’t get any further. Some did what they had to. Everyone’s life, no matter how far they got with it, really, really mattered.”

Given the AIDS-era inspiration behind “In These Boxes,” it is no surprise Saunders is reminded of another famous community-based project: The AIDS Quilt. “Every panel of that represented somebody loved and lost. Now we can experience that in a digital way,” he says. “It’s a public-private space.”

There is a danger in limiting keepsakes and memories to ourselves, says Saunders, because we can start to feel like we are the only ones struggling with loss. “How can we normalize it so we’re not trapped alone?”

Wakes and funerals help in the immediate aftermath of death, but ask anybody who has lost somebody important to them, and they can tell you: Loss doesn’t go away overnight. It lingers. “In These Boxes” explores that lingering and how everyone’s individual loss relates to one another.

Of course, not all death is followed only by sorrow. Sometimes, there is relief. In these objects, there is celebration. One recent submission to “In These Boxes” features a photo of an old gun. The caption reads, “My grandpa once got shot with both barrels of this thing. He arrested the guy and kept his gun. That’s the manliest thing I’ve ever heard.”

Saunders says he feels honored to be entrusted with these photos of objects and the memories attached, and he can feel how important the project is to its participants and audience members every time he performs. “Some people are nervous. Some cry. Some feel relieved,” he explains. “Every time the audience is different.”

Friday’s performance at Dreamland will mark the first time “In These Boxes” has appeared in a Southern state. Saunders, a native Kentuckian who spent time in New York City’s East Village and now is based out of Los Angeles, wonders if the audience will have any defining regional characteristics. Death is treated differently in the South than on the West Coast, he says.

Though Saunders has returned to Louisville to perform music, this will be his first artistic performance in his hometown in two decades. Here again is a parallel: between the loss of loved ones and the places we grow up in.

“I’m 52. People always want to talk about where I lived 30 years ago. … There’s a real hunger to find out about roots,” says Saunders. “People, places, they disappear.”