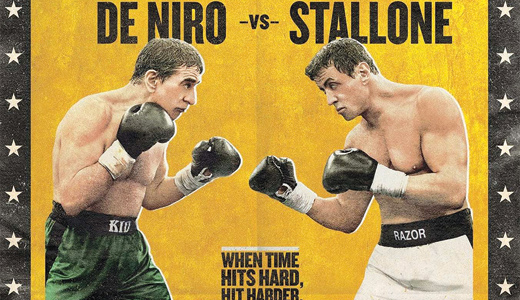 Robert De Niro and Sylvester Stallone … do we really need to go on? OK, these two vets play former boxers who left a lot of unfinished business in the ring when one retired suddenly 30 years ago. Now, obnoxious promoter Kevin Hart decides to make a killing by provoking them into one more dance. Much of the movie plays as something of a spoof on both “Rocky” and “Raging Bull,” with lots of good-natured “too old for this” ribbing, amid Hart’s nonstop yammering (frankly, it would have been a better film without him). With Kim Basinger, her breathtaking daughter Ireland Baldwin, Rich Little as the announcer, and Alan Arkin. Lots of fun.

THE HOBBIT: THE DESOLATION OF SMAUG

Anyone who needs a review of this must have spent 2013 under a polar ice cap. But we get paid by the word, so: Part two of Bilbo Baggins’ (Martin Freeman) journey to reclaim the dwarves’ lost realm takes him through the Elven forest of Mirkwood, into the Lake-town of Men, and face to face with the great worm, Smaug, all to terrific effect. Our only complaint was the strained and unnecessary attempt to kill Smaug in a tsunami of molten gold — which, as any fool knows, would not harm a dragon in the least — but we’ll not quibble. You know you want it, my precious …

You’ve got to give props to the makers of this no-budget nudie-sci-fi serial-killer-actioner for giving it their all. A high-tech cop (Tom Detrik) is on the trail of an infamous serial killer (D.C. Douglas, whose voice ornaments Geico commercials), who, in turn, is peeved that lesbian psychopaths Carmela Hayslett and Tammy Jean are stealing his blood-soaked thunder. Meanwhile, the world is about to be destroyed by a wandering planet. With Lloyd “Troma” Kaufman as the president, and a host of schlock-movie vets in cameo. What’s not to like?

Meryl Streep and Julia Roberts lead us through the dark recesses of Chick Flick Hell in this adaptation of the popular tragicomic London/Broadway play. Streep plays the just-plain-mean, drug-addicted, cancerous matriarch of the Weston clan. The rest of the cast, including Chris Cooper, Ewan McGregor, Margo Martindale, Dermot Mulroney, Julianne Nicholson, Juliette Lewis, Abigail Breslin, Benedict Cumberbatch, et. al., suffer under her constant abuse, each with their own coping mechanism. Sam Shepard plays the husband who sets everything in motion by committing suicide rather than watch this movie for one more damn minute. We feel his pain.

One-man moviemaking machine Danny “Machete” Trejo does his usual butt-kicking, no-holds-barred tough-but-righteous character — here a Vietnam vet training street kids to box — in this sequel to 2012’s hit. And this time he’s got help in the form of a reluctant Danny “Lethal Weapon” Glover. Together they take on the villains who kill Trejo’s student. Say what you want, the guy knows how to make a frickin’ movie!

Latest in a seeming flood of shy Afrocentric romcoms, this one starring Darrin Henson (who has made a solid career in this genre) as a good-hearted guy down on his luck until Gabrielle Dennis (Gloria on TV’s “Justified”) enters the picture. All seems rosy at first; then the usual suspects show up to make life miserable — ex-husbands, ex-girlfriends, ex-cetera. Makes a nice little date movie.

A much appreciated look back at the career of pioneer transvestite harbinger of bad taste and outrageous behavior, Harris Milstead, better known as “Divine.” John Waters (of course) leads the list of international talking heads who pay tribute to the Queen of Naughty, along with Ricki Lake, Tab Hunter, Mink Stole, Holly Woodlawn and dozens more. One of the best biodocs imaginable: surprisingly powerful, moving — and damn funny!

The dramatic true-life tale of NHRA superstars Don “The Snake” Prudhomme (Jesse Williams) and Tom “The Mongoose” McEwen (Richard Blake), retold in all its loud, nitro-burning fury. Longtime friends and racing rivals, these two turned their innate marketing genius and love of speed into a business empire that paved the way for other big-money motorsports, especially today’s NASCAR. It’s a great story, largely unknown, told with attractive, talented people including hot Ashley “Chronicle” Hinshaw, sexy Kim “She’s Out Of My League” Shaw, the great Fred Dryer, John Heard and a guest spot by Tim Blake Nelson.

One of our favorite old TV shows and one of the highest-rated dramas in TV history, all but unseen in decades, now back for all to enjoy. Acting vet Barbara Stanwyck is head of the Barkley clan, trying to hold their massive 1870s business interests together while family dynamics and evil baddies fight to wrest it away. With her illegitimate half-breed son (Lee Majors) and his brothers (Richard Long and Peter Breck), she rides the fury like a force of nature, but it was her daughter, played by jaw-dropping beauty Linda Evans, who kept us tuned in each week. Yow! A TV masterpiece of writing, cast, direction and locales unequalled to this day; 30 big episodes.

Award-winning doc filmmaker Alix Lambert brings us this look at the career of Ronald Dominique, a nearly unknown Louisiana serial killer who raped and killed 23 men between 1997 and 2006. But this animal’s sad acts are but a footnote to the broader evils afoot: the crushing poverty of the area, the marginalized victims and their families, the all-but-nonexistent law enforcement, and the complete lack of legal representation for the victims’ families. Oh, and a little thing called Hurricane Katrina. A master’s course in advocacy filmmaking.

An extremely likable cast and an upbeat script turns what could have been just another “playa wants to find something more meaningful” modern romcom into something special. Much of that is due to Camilla Bell (“Open Road”) as the radiant object of Skylar Astin’s affections, and Kaden Gibson as Skylar’s 9-year-old nephew, who provides the best insights. Formulaic but fun.

We are suckers for horror anthologies, and this low-budget affair is exactly the reason why. Using a real estate agent’s unsellable murder-house as its central conceit, we’re treated to four solid short tales that span the genre from alien bugs, to a young veteran returning home to live with his deranged father, to a real-estate party that gets way out of hand, to our favorite: the tale of a psychotic singer and his band of, well, goblins. Made for the price of a used car, this is fueled more by love and inventiveness than technical excellence. We liked it.

David “Doctor Who” Tennant narrates this award winning — and damn entertaining — look at our world from literally a bird’s-eye view: much of it filmed from cameras mounted on the backs of birds! That and other aerial tricks including drones and paragliders provide a brilliant winged perspective on the connectedness of nature and our piddling place in it as we soar over six continents. The BBC at its best.

Four of Jaglon’s patented quirky, intimate comedies, including “Eating” (1990), “Babyfever” (1994), “Going Shopping” (2007) and “Irene In Time” (2009). While others may argue, our favorite here is “Going Shopping,” if only because of the lineup of guests: Rob Morrow, Lee Grant, Bruce Davison and the much underused Jennifer Grant, all going shopping at Victoria Foyt’s boutique (and occasionally talking directly into the camera about their own real shopping habits). If you’ve never seen a Jaglom film, you’re missing a unique experience.

Normally we avoid Lifetime Original movies like the plague, but we liked this one if only for the cheesy, lowbrow cast, lots of unconvincing blood and no real depth. Christina Ricci doesn’t explain much as the legendary and enigmatic murderess, but she’s a ball to watch as she chops up a host of Lifetime regulars, including Billy Campbell, Clea Duvall, Gregg Henry and Stephen McHattie.

The script is ridiculous, but big Tom Sizemore and his team of go-anywhere-do-anything soldiers keep piling on the mindless action and terrific stunts until you’re hooked. There’s some plot about yellow cake uranium being smuggled out of Africa, but who really cares? Lots of grunting, 2-D characters, explosions and disposable bad guys keep the action moving in between peeks at Bonnie Lee Bouman as “The Officer,” cutie Aurélie Meriel, hottie Tanya van Graan, and a smattering of nude boobs. Guy flick.