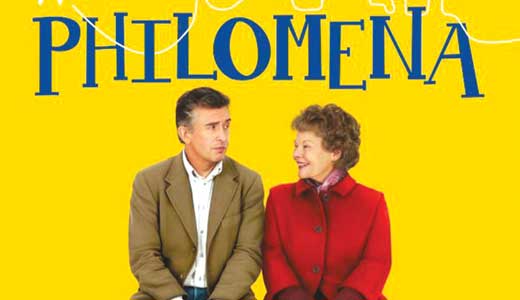 This wildly popular dramatization of the wildly popular biographical tale stars Judi Dench as Philomena Lee, an Irish woman who became pregnant as a teen in 1952. Forced into a convent for “fallen women,” she raised her child until the age of 3, at which time the church stole it and sent it to the U.S. for adoption. Legally forbidden from contacting the child, she nonetheless spent the next 50 years searching. A great story, well told, with beautiful Sophie Kennedy Clark (“Nymphomaniac”) as the young Philomena and Steve Coogan as the writer who aids in their search.

THE SECRET LIFE OF WALTER MITTY

Ben Stiller has finally made an honest-to-God good movie! He plays and directs James Thurber’s immortal daydreamer with Kristen Wiig as the unknowing object of his affections. She wordlessly launches the bumbling nebbish into a real-world adventure (or is it?) filled with heroism, danger, intrigue, guns, bad guys, falls, animals and snow. Visually breathtaking at times, Stiller seems to be consciously avoiding his usual shtick, making this sprightly, entertaining and exciting. With help from Jon Daly, Adam Scott, Shirley MacLaine and cameos by Conan O’Brien, Sean Penn and Andy Richter. Recommended.

This ambitious low-budget sci-fi thriller is a marvel: a great central character played by lovely Alesandra Durham, an intriguing story, interesting effects and nice surprises. Durham is an FBI agent with a secret ability, trying to make a difference in a rag-tag future destroyed by “time wars” — where future enemy combatants travel to the past to pre-destroy their opponents. Add in paranormal activity, the “ghost” of her missing husband, an unborn child and the slow unraveling of the fabric of reality, and you’ve got one hell of a picture. Here’s hoping for a sequel.

This surreal and nightmarish animated/live-action/stop-motion Czech interpretation of “Alice In Wonderland” will blow your frickin’ mind! Very dark, it oozes over some of the more forgotten elements in Lewis Carroll’s tale, wringing the Disney from Wonderland to evoke a nicely exaggerated, if playful, attic-realm of universal childhood fears. Largely dialogue-free and wildly original — while simultaneously sticking closer to Carroll’s tale than any previous version — this is simply jaw-dropping. Don’t miss it.

In Britain, a place populated by all the colors and languages and races of Europe, Asia and Africa, to be a red-headed person is akin to a racial epithet. But ginger filmmaker Scott P. Harris uses it as a warmhearted comic device in his film about uniqueness, finding your place in the world and especially about finding love, with help from some talking heads, a bit of brilliant animation and the universality of our differences. A surprising and unique film.

If you were a fan of the “dead teenager” movies of the ’80s, have we got a flick for you! This posits “What happened to all the summer camp horror movie filmmakers?” Well, it left one of them (played by Eric Roberts, always a sign of quality) unemployable, so he decides to resurrect the genre with an online “contest” to pick the next generation of stars. Problem is, his “contestants,” stuck in an abandoned summer camp, keep dying horribly! Great cameos, Danielle Harris, hot babes, blood and stale ’80s horror-humor. What more could you want?

OK, we are officially tired of Kevin Hart. This flick may be his starring vehicle, but it is saved by the innate charisma of partner Ice Cube. Cube plays a hot-tempered cop with a beautiful sister (Tika Sumpter) who has hooked up with annoying motormouth/rookie cadet Hart. He proposes they go on patrol together to prove he’s worthy of the girl. Hoping to scare the guy off, Cube agrees, resulting in your basic mismatched-buddy comedy with guest stars John Leguizamo, big Bruce McGill, Laurence Fishburne and Gary Owen running interference. A fun ride if you keep your thumb on the mute button whenever Hart fires up.

TimeLife has been selling “Carol Burnett Show” megasets for what seems like forever; so why would you want this six-disc offering? Because (1) most of these episodes were omitted from the other releases, and (2) these are some of the funniest skits ever broadcast on TV! Includes the largely unscripted world’s-oldest-firefighter sketch, classic “As The Stomach Churns” soapers, plus skits with Andy Griffith, Carl Reiner, Roddy McDowall and Dick Van Dyke. But the best reason is a look back at the brutal physical comedy of Tim Conway and his hapless foil, Harvey Corman. Terrific.

THE END OF TIME

We are science junkies, having practically memorized every “Cosmos” and “Nova”-type TV title ever broadcast. But this doc from Peter Mettle stands high above, tackling that most perplexing and ethereal of topics: the nature of time. To say more might deprive you of the surprise, the romance and the sheer poetry of Mettle’s presentation — his visuals alone are worth the price of the disc, but the lessons contained within are mind-blowing. Do it.

You might not think of author Charles Dickens as sexy, but that’s because you’ve never seen him portrayed by a very married Ralph Fiennes, with damn-hot — and decades younger — Felicity Jones as the object of his affections! This true tale not only explores the social mores of the 1800s, its treatment of women, the institution of marriage and the nature of celebrity, but also lays bare the unique life and personality of Western literature’s greatest grumbler — even though the movie is more about her than Dickens. Recommended; with the always welcome Kristin Scott Thomas and not a single mention of “Dickens Cider.”

The best thing about this sexy comedy is the cast, led by Sam Rockwell as a bland but likeable pharmacist who falls into a steamy, out-of-control, drug-and-booze-fueled affair with smokin’ Olivia Wilde (the line forms here, Sammy). As his world spirals the drain (including a half-remembered murder!), his nasty wife and father-in-law (Michelle Monaghan, Ken Howard) continue to treat him like dirt, while DEA agent Norbert Leo Butz (“Dan in Real Life”) smells a rat. Ray Liotta and Jane Fonda pop up in clever cameos. Fun stuff.

A nasty, quirky South Korean thriller unlike any we’ve ever seen. A suspected serial killer publishes his autobiography once the statute of limitations on his crimes has expired. This launches the mother of one of his victims into an all-out manhunt to kill the bastard — climaxing in one of the best car chases ever filmed. But wait a minute … Who is this other serial killer, also claiming to be responsible for the murders, and what is he after? Literally edge-of-your-seat stuff.

DEATH DO US PART

Julia “Hot Rack” Benson (Lt. Vanessa James from “SGU Stargate Universe”) is perfectly cast as the lusty bride-to-be in this cabin-in-the-woods horror-thriller, the site of a joint bachelor/bachelorette party. Peter Benson from “District 9” is the would-be groom who finds his supply of hunky friends and their damn-hot dates dwindling after best man Kyle Cassie of “True Justice” dreams up this little shindig. Needed more boobs, but what doesn’t?

The incomparable Sally Field still shines in this now-famous tale of fighting for justice in the workplace, based on the real-life struggles of Crystal Lee Sutton. A single mother being paid slave wages at a deadly textile plant meets union organizer Ron Liebman and is inspired to turn her life — and those of her co-workers — around. An outstanding and important film whose message of empowerment has since been blunted by politically driven campaigns of union-bashing, paid for by big business. We’d love to see a remake set in a Walmart. A must-own.

PARANORMAL ACTIVITY: THE MARKED ONES

Opinions on this flick, the fifth or sixth in the series (depending on how you count them), range from “best of” to “lame,” but all agree that it is the funniest of the franchise, moving away from rich white folks to struggling Latinos to find new shocks. And that’s a good move, as this has far more flavor and nuance than previous entries. Series vet Katie Featherston returns, as does Molly Ephraim from PA2 and Meredith Eaton from PA3; the rest of the cast is relatively unknown with newcomer Andrew Jacobs as the central character. A fun and scary bit of couch fodder.

A Canadian documentary on Earth’s most beautiful and enigmatic natural wonder, the Aurora Borealis or “Northern Lights.” This is something of a first in filmmaking since the lights are fleeting in nature, and their wispy colors, while mesmerizing and brilliant to the human eye, are nearly impossible to record on film. That’s why master doc-maker Peter Mettlers pulls out every technical trick in the book to bring this miracle — which few of us may ever witness live — to our TV screens. A brilliantly composed and magical look at mother Earth’s shining crown.

THE CURSE OF THE GOTHIC SYMPHONY

Havergal Brian was a composer little known outside of core orchestral culture, who, like Wagner and Mahler, enjoyed the challenge of writing long, powerful, complex and larger-than-life pieces based on legendary tales. His most challenging was the Gothic Symphony; with a run time of more than two hours, it requires a massive orchestra and musicians of uncommon talent and stamina. This doc is an Australian look at the 2010 staging of this work requiring over 200 musicians, 400 choristers, an army of support personnel — and a very select audience — all dedicated to breaking the “curse” of his “unperformable” symphony.

Comedian Will Arnett voices Surly, a miscreant squirrel, tossed from his park home by his P.O.’ed woodland neighbors, who dreams up a plan to rob a nut shop, while the shop’s crusty human owners are planning a major heist of their own, in this original CGI-animated tale. It’s a harmless, shameless, colorful romp filled with slapstick, dim adults, brilliant animals-as-surrogate-kids, and lively music guaranteed to delight without boring the ’rents. Co-stars Brendan Fraser, Gabriel Iglesias, Jeff Dunham, Liam Neeson, Maya Rudolph, Katherine Heigl and more. What’s not to like? A sequel is due by 2016.

We don’t know why, but we can’t help ourselves: We still get a kick out of these damn animated train tales! Yes, there have been some changes in the voice-talent and animation lately, but there’s nothing here to prevent your little rugrats from learning fun life lessons like “always pay attention to where you are” and “good advice can come from anywhere” in this one-hour collection of stories, games, songs and puzzles. We are so ashamed.

If you were a fan of “Rubber,” that flick about a killer tire rolling down a desert highway, then you’ll like this absurdist look at cops from the same director, Quentin Dupieux. In his world, the PoPo are fat, slovenly, drooling idiots who shoot people then cover up their “whoopsie” by stuffing the bodies in their trunk. Lazy, thieving morons who get freebies from hookers, goose women in restaurants, smoke dope and imagine themselves as rockstars, they are, nonetheless The Law — and you have to obey them. Sounds like a documentary to us! Stars Mark Burnham and Eric Judor, with hot little Arden “MadTV” Myrin and cameos by Marilyn Manson, Eric Roberts (ugh) and Ray Wise.