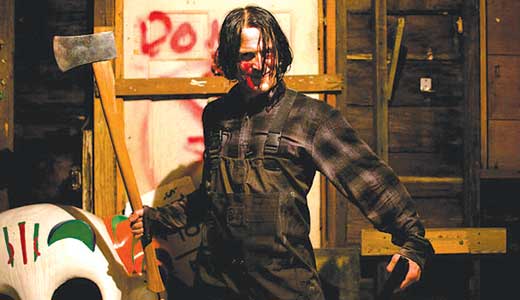 We simply had to see this brutal comic thriller after hearing that Quentin Tarantino called it “best film of the year” — and it doesn’t disappoint! The three wolves of the title are (1) a sadistic pedophile murderer, (2) the father of one of his victims, and (3) a vigilante police officer whose bosses will look the other way … as long as he delivers the killer. A thick subtitled Israeli stew of torture, rage, black humor and stark terror. Completely unpredictable, beautifully stylish and blissfully over-the-top indie filmmaking at its finest. Recommended (assuming you’re as bent as we are).

Actor Doug Bradley had a promising career once, before being cast as the iconic Pinhead in “Hellraiser.” Today he makes an admittedly good living off the horror-convention circuit and its associated enthusiastic young filmmakers. He does a nice cameo here as the owner of a failing amusement park who arranges the mass slaughter of employees to draw bigger crowds. What could possibly go wrong? With Nivek Ogre (“Repo! The Genetic Opera”) as the killer who chases large-breasted young women with a giant bird-like mask over his face. A cheapie, but we liked it.

Cybill Shepherd, model-lovely and as graceful as they come, was terrific in this warm, funny romcom, now available for the first time on Blu-ray. Her husband (Christopher McDonald) dies, goes to heaven and is recycled immediately into a newborn body. Two decades later, that newborn has grown into Robert Downey Jr., whose past-life memories resurface when he crosses paths with Cybill … while dating his/her daughter, Mary Stuart Masterson! And, just for good measure, his best friend, Ryan O’Neal, is in love with his widow, all to the music of Johnny Mathis. Great flick.

DOCTOR WHO: THE WEB OF FEAR

This very rare Patrick Troutman four-parter from 1968 was considered lost by the BBC until bits and pieces surfaced from around the globe and were painstakingly restored, once again allowing us to share in one of The Doctor’s best — and scariest — early adventures. After colliding with a mysterious web in space, the TARDIS materializes deep beneath London where an old enemy lies in wait. Worse yet, he has resurrected the robot Yeti and aims to absorb The Doctor’s mind. Bwaahahaaa. Terrific storytelling, a great adventure and the introduction of UNIT and Colonel Lethbridge-Stewart!

Aka “Martial Arts Double Feature,” this disc contains two rarely seen and highly underrated chop-socky treasures from 1972, both starring ass-kicking Angela Mao from “Enter the Dragon.” “Whirlwind” (aka “Deep Thrust — The Hand of Death”) is a solid, if generic, fem-Kung Fu flick, heightened with music stolen from 007’s “Diamonds Are Forever.” “Hapkido” (aka “Lady Kung Fu”) is a better known free-for-all featuring the great Sammo Hung Kam-Bo. Set in 1934 Korea during the Japanese occupation, Mao is one of three Chinese students whose school is destroyed in retribution for a street altercation.

A welcome return to the little Vermont inn of Bob Newhart and Mary Frann. By 1984, most of the best characters — and there were so many of them! — had emerged, from Julia Duffy’s spoiled-heiress maid, her would-be boyfriend Peter Scolari, Tom Poston’s idiot handyman, and the comic genius of Larry, Darryl and Darryl (William Sanderson, Tony Papenfuss and John Voldstad). Together they created a comic legacy unequaled in our minds. Also includes three great mini-features poking fun at their guest stars and gut-busting slop-over humor from Bob’s previous series. The best TV ever made; don’t miss it.

This BBC series brings a lot of the tone, flavor and bloodshed of “Copper” to 1890s London as we follow the lads of H Division, the police unit assigned to keep order in Whitechapel in the wake of Jack the Ripper. This season ups the ante with rough tales of opium, female gangs, gay brothels, children with tails, suicide cults, violence, murder, and fist-size diamonds. The accents may be a bit thick to our American ears, but there’s no denying the power and universality of this damn-entertaining series. Recommended.

The great Sammo Hung directs and co-stars in this classic star-heavy tale of seven warriors hired by a small farming community to protect them from bad guys. The filmmakers make amends for recycling that well-known plot by gathering a sterling cast — Tony Leung (Chiu-Wai), Jacky Cheung (“Once Upon a Time in China”), Adam Cheng (often works with Jet Li) and “Five Fingers of Death” star Lieh Lo, plus many more — under a script by “Kung Fu Hustle” writer Kan-Cheung Tsang. Great stuff.

This made-for-the-Lifetime Channel programmer is a minor miracle, turning a low-rent TV schlock-plot into a remarkable tale of real-life perseverance and determination. Regina King plays the real-life mother of four who sacrifices everything — including the husband she loves — for her children. One of them, Gabby (played by Sydney Mikayla and Imani Hakim), shows gymnastic promise, something beyond the financial limits of the struggling family. Yet through sheer pluck and drive, she grew to become an Olympic All-Around Champion, the first African-American ever to obtain that honor.

While we don’t want to give away too much of the plot, this is a small but thought-provoking film about perception, racism and prejudice — or is it a look at how small-town cops treat strangers? Frankly, it’s neither, but that confusion is part of the allure of this social/crime drama experiment starring Mekhi Phifer, Sterling K. Brown, William Sadler, Rebecca Creskoff and lovely newcomer Lizzy DeClement. Not the best movie we ever saw, but definitely worth a look.

Those crazy/lucky Finns who created the original Angry Birds smart-phone game continue their reign of pig-hating mayhem in this TV series. What more could you possibly want to know? OK, how about “26 episodes topped off by a whacked-out Easter Egg Hunt as only the Angry Birds could do it!” You gotta get this.

Ryan Schwartzman from TV’s “Goon” co-wrote and stars in this gentle tale of a man who is successful, yet unfulfilled in his career. So he quits his job and goes on a road trip hoping to “find himself” — the ultimate movie cliché’ — only to discover that he really likes to build treehouses. In secret. On other people’s property. And those surprise constructions change people’s lives in surprising ways. Sounds corny, we know, but the first-rate cast, including Corbin Bernsen, Schwartzman’s wife/co-writer Jennica and “Home Improvement”’s Richard Karn, keep things from getting maudlin. Good family entertainment.

What can we say? A group of muscular, gorgeous — and damn scary — women prepare for the MMA championships wherein they’ll kick, punch and beat the crap out of their opponents, all of whom will be dressed in lingerie. Former Lingerie Football star Michelle “Scrapper” Blanchard leads us on a backstage safari to meet the coaches, competitors and stylists behind the stars of this up-and-cumming sport.