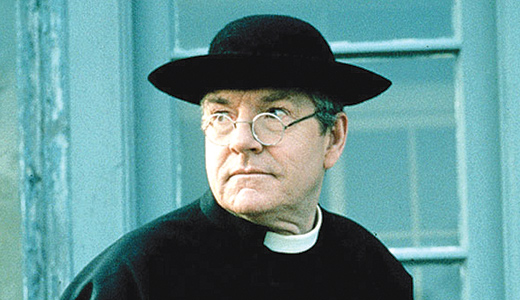 If you love a ripping murder yarn, then you’re no doubt already familiar with the adventures of G.K. Chesterton’s Father Brown, a mystery-loving amateur sleuth prowling the less-than-righteous paths of 1920s England. This series, starring Limey stalwart Kenneth More, with Dennis Burgess as his handy thief-turned-PI bud, Hercule Flambeau, is simply marvelous: funny, smart, lively and action-packed (despite the limits of sleuthing in a cassock). Alas, only a scant 13 episodes were ever made; last seen here on PBS’ “Mystery,” this is TV at its best. Highly recommended, if only for the fun of spotting now-stars at the start of their careers.

You read that right! The entire groundbreaking and wildly popular ’80s Steven Bochco ensemble cop drama that made stars of Daniel J. Travanti, Veronica Hamel, Dennis Franz, Joe Spano, Betty Thomas and James Sikking — and of particular note, actor Bruce “Sgt. Mick Belker” Weitz, who honed his craft at Actors Theatre back in the late ’60s. Twenty-six well-earned Emmys, 144 perfect episodes, all set in a gray, unnamed metropolis that looks surprisingly like Chicago, and it’s all packed in a no-nonsense boxed set with lots of special features, bonus goodies, commentaries and more. A must-own for any TV junkie. Hey, let’s be careful out there.

Why this Southern crime drama isn’t better known is beyond us. Willem Defoe plays a detective who infiltrates Tom Berenger’s criminal empire in ’80s Louisiana, eventually twisting his most lethal enforcer, Matt Dillon, into bringing down the entire operation. Berenger is nearly unrecognizable here — and seriously demented — as the creepy mob boss; with great cameos by Amy Smart and Neal McDonough of “Justified.” A solid, spicy, Cajun-fueled outing; entertaining as hell.

A wildly original and unique thriller about a young man (Thomas “Jingle All the Way” Stroppel) who is fed up with life in his father’s increasingly violent secret militia, which routinely hunts down and kills those whom the courts have, in their eyes, failed to properly punish. TV vet David Bodin will send shivers down your spine as the dad, slowly devolving into righteous insanity, with help from Tom Berenger and underrated actor Ted Rooney. Thought-provoking and intense.

Sometimes you need to step back in order to see something properly, which is why this five-part British documentary mini-series about the American Civil War is so fascinating. Elizabeth “Downton Abbey” McGovern narrates, focusing on the “Western Theater,” that area between the Mississippi River and Appalachia (i.e., “rat ’bout cheer”), the bloodiest and most important real estate of the entire conflict. Far more disturbing than any war doc we’ve ever seen, it includes an astounding 14-minute silent film shot during the 1913 Vicksburg 50th anniversary siege reenactment. This is war: racist, bloody and insane.

Man, did we love this movie! A young man whose parents were murdered during a past visit by Halley’s Comet finds the world going quietly mad as a new comet becomes visible. His neighbors are acting strangely, and now … are they actually starting to mutate? That’s when his gun-toting, conspiracy-nut neighbor suggests they get the hell out of the building. Not really a great movie, just entertaining with an a attractive French cast that includes Fabian Wolfrom, John “Saw II” Fallon and more than a few sultry French babes. Subtitled guy flick.

Newlyweds Zach Gilford and Allison Miller can’t seem to remember every detail about their honeymoon, but an unexpected pregnancy doesn’t give them time to suspect in this low-budget “evil baby” found-footage thriller. A bit slow at times, it makes up for it with the two great leads (cute little Miller was terrific in “Terra Nova,” and Gilford is a veteran of both “The Mob Doctor” and “Friday Night Lights”) and a couple of slam-bang shock-scenes, particularly one in a parking lot that will haunt you for days.

This ridiculous chick flick would be unwatchable if not for the charisma of leads Kate Winslet and James Brolin. She’s an agoraphobe and (spoiler!) he turns out to be a scary convicted murderer on the run. Along the way, he cons his way into her car via her young son … so she takes him home. Or, as the boy narrates, “Frank ironed, and in return my mom taught him how to rumba.” Wow. Director Jason “Juno” Reitman lets the tale unfold slowly, revealing bits of back-story only when things slow down, making this a much deeper chick flick than usual.

We seem to be in something of a modern Renaissance of the horror/thriller anthology. Case in point: this set of tales triggered by the contents of an old locker being cleaned out by voice-over artist Jason Spisak (“Piranha 3D”). Boss Jon Polito regales him with morality tales, brought to life by the talents of Jon Gries, Krista Allen, Tatyana Ali, Ricky Schroder, Curtis Armstrong, David Huddleston and others, all culminating in a life-altering confrontation for the young man himself. Nicely ironic in a “Twilight Zone” sort of way.

Anthony Head (Giles from “Buffy the Vampire Slayer”) is having a ball with “Torchwood”’s Eve Myles in this broad, spry and likeable BBC sitcom. This comedy won’t challenge your intelligence — a running gag about Head being stalked by his ex-wife (Lindsay Duncan from Burton’s “Alice in Wonderland”) is overplayed to epic proportions — or wallow in the modern trend for snarky irony, this is an old-school sitcom in the “Three’s Company” vein about love and life and all the damn people — particularly family — who get in the way. Love is always funny.

Having spent parts of our youth roaming the hills and hollers of Appalachia, this bear-hugging nature doc — wherein Scottish filmmaker Gordon Buchanan earns the trust of a mother black bear and her cub — scared the hell out of us. Can you even imagine what a bear claw can do to the human body? Not pretty. All that aside: It’s as heartwarming as can be, and the little one, dubbed Hope, is a pure joy to watch. Life-affirming filmmaking at its best, but don’t try this at home.

Gaffigan’s humor is based on all the simple, stupid things each of us does every day — making this the perfect vid to steal a gag from when sharing with your buds. In lesser hands it might all to fall into trite sameness and mediocrity, but Jim’s greatest talent is realizing just how ridiculous life is, giving you a fresh perspective. Oh, and bacon; Jim has this thing for bacon. And smells. So many smells. Recommended.

A dirty little film festival favorite about four meth-heads who break into a house in a private community, looking for a quick smash-and-grab. Boy, did they pick the wrong house! We don’t want to give away too much more about the plot, other than to say that it is both insane and completely believable. The cast of largely TV actors (many from “Law And Order: SVU”) is impeccable, especially Michael O’Keefe, David Zayas from “Dexter” and Neal Bledsoe of “Smash.” Taut, exciting, disturbing, shocking and well worth your time.

This gay romcom set in the admittedly screwy world of drag queenery is a hoot as good-guy Connor (Alec W. Seymour) is instantly smitten by newly gay Devin (Kc Comeaux), only to find that the young man longs for the delights of Puerto Rican drag queen, Adora (Joshua Cruz). Connor has only one choice if he’s to find true love: become a drag queen himself!

It’s been said that music is the universal human language, though we never really knew what that meant until seeing this biodoc on late Argentinian folksinger, Sosa, who was literally searched and arrested on stage by the military junta in 1976. Since her death in 2009, her popularity has only spread, saturating the Spanish-speaking world and continuing outward. And the secret? Her music is more than evocative words, it seems to touch a place where universal, primal emotion resides. Loving, joyful, damning, powerful, the sonic equivalent of light in a cold, dark world. If music speaks to you, then this could change your life.

No-budget indie horro-vet Brett Rickaby stars in a surprisingly good no-budget indie techno-thriller about the aftermath of a cyber attack on U.S. spy-network computers. Mesmerizing TV actress Amy Motta is damn hot and brings just the right chemistry as Rickaby falls deeper down the rabbit hole with each new lead. Surprisingly complex and incredibly ambitious, the result is first-class entertainment from people who are clearly in love with movies. Worth your time.

The great Geoffrey Rush is in his element here in this playful, surprising and very unusual romantic thriller about an art appraiser/auctioneer (Rush), asked to study a mysterious woman’s (Nordic angel Sylvia Hoeks) late parents’ collection. His life literally falls apart as he succumbs to the young woman’s enigma — at first from the other side of a door and later in graphic sex scenes. With Jim Sturgess, Donald Sutherland, a score by Ennio Moriconne, and art. Lots of art.

Hidden within this grim tale about a pair of barely-teen ragamuffins scouring English trash heaps for scrap metal lies Oscar Wilde’s famed morality tale of virtue amid adversity. The two youngsters, best friends, are outcasts, desperate to help their struggling families. But a hardened, sallow scrap dealer (who was obviously such a boy as they once) plays them against each other, determined to break their friendship. And then something happens that you simply won’t see coming. We won’t spoil it. Worth checking out.

If you are too cheap or soulless to buy the BBC’s extraordinary “Earthflght: The Complete Series” set, ya’ loser, then this 90-minute “best of” may be for you. David “Doctor Who” Tennant narrates one of the most amazing nature docs imaginable; literally a bird’s-eye view of our world — much of it filmed from cameras mounted on the backs of birds — from around the world. Graphically demonstrates the interconnectedness of our planet in a way never before imagined. Breathtaking.