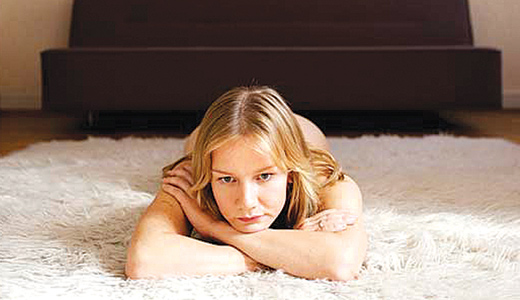 This Dutch look at marriage, freedom and sexual expression as a wonder — as in, “We wonder how this woman can still walk after all that sex!” The woman in question is mature, pixie-ish German actress Sandra Hüller, who plays a respected married doctor with a family and a secret apartment where she has sex with her patients. Why? ’Cause she likes it! But when her secret is exposed, it ruins her career and her marriage. But why should simply enjoying a healthy sex life cost her everything? Wouldn’t suppressing her desires be detrimental to her own health? A beautiful and provocative look at being human.

Finally available after a long legal battle over the awesome ’50s-’70s soundtrack, Dana Delany, Nan Woods, Chloe Webb, Marg Helgenberger and Michael Boatman continue their groundbreaking distaff look at the Vietnam War from inside the “Five and Dime”: the 510th Evacuation Hospital and R&R Center. This season, Ricki Lake joins the cast as Holly Pelegrino, a green Red Cross volunteer. The best episode, however, is “Ghosts,” in which Dodger’s fireside ghost tales invoke private, individual memories of haunted relationships throughout the camp. Breathtaking TV.

What could we possibly say that hasn’t been said about “Poirot,” one of the longest-running and most popular TV series on the planet? How about “This is the next-to-last season!” Or “This season features ‘Murder on the Orient Express’!” David Suchet continues to amaze as the fussy Belgium detective solving murders and thefts most foul amid the otherworldly elegance of Art Deco Europe. Four full-length tales; great guest stars including Jessica Chastain, Hugh Bonneville, Barbara Hershey and Toby Jones; and some of the best bonus goodies of the entire series. Just buy it.

Sony is releasing four great ’90s Big G two-fers this week, all on beautiful Blu-ray. Includes “Godzilla vs. King Ghidorah” (our favorite three-headed baddie) and “G. vs. Mothra (1992)”; “G. vs. Mechagodzilla II” (the best of that series) and “G. vs. Spacegodzilla”; “G. vs. Destoroyah” and the underrated “G. vs. Megaguirus” (aka “The G Annihilation Strategy”); and our favorite of the bunch, “G.: Final Wars” with “G: Tokyo S.O.S.,” both of which are pull-out-all-the-stops, over-the-top super-sized Suitmation-stompin’ dino-lizard frenzies. Our highest recommendation.

Since breaking out on “The Daily Show,” Lewis Black’s comically angry, blood-vessel-popping brand of tirade has become an American tradition. And here, in front of a sold-out crowd in Atlantic City, he proves we’re all still mad as hell … or at least we should be. As sharp, insightful, fresh and filled with rage at the idiocy he sees around him as in his first TV rant. This guy just gets better with age — or maybe everything really is going to hell in a handbasket, and he’s the only one who sees it.

A little-known indie horror flick with a seriously dark vibe about a pair of artists (edible Sarah “Sons of Anarchy” Jones and Jon “Stay Alive” Foster) who move waaaay back into the piney woods to explore their art — unaware they are entering the turf of a famously reclusive artist/nut-bag (double-jointed horro-vet Mark Steger). With found-footage elements and great visuals, the horror and suspense build nicely, and the final reveal is wonderfully terrifying, if a bit jerky. Would have preferred to see this done with an R rating, but we liked it.

We were instantly charmed by this toss-off comic PI drama starring hunky Allan Hawco, with “Braveheart”’s Sean McGinley as his jarhead dad. Together the two Irishmen sleuth for a living in the picturesque seaside town of St. John’s, Newfoundland (Canada), often from the seat of a cherry GTO. Has a great “Starsky and Hutch” meets “Van Wilder” feel — with the addition of a close-knit Irish family tagging along — as Hawco’s rakish charms keep him constantly in his old man’s crosshairs and up to his neck in girl trouble, starting with his crazy-hot ex-wife Rachel “The Spy Who Shagged Me” Wilson and she-cop Krystin Pellerin of “The Tudors.” Fun.

THE ART OF THE STEAL

Kurt Russell has made some wonderfully bad movies in his career (“Escape from New York,” anyone?), but this may be his “Citizen Kane.” He’s a motorcycle daredevil/art thief who teams with brother Matt Dillon to do one last big heist with the old gang, neither of them suspecting that the other has a hidden agenda. The crazy cast includes Jay Baruchel, Jason Jones and Terence Stamp, with sultry Elle Downs and “Vikings”’s drop-dead gorgeous Katheryn Winnick for eye candy. A loose, low-rent “Ocean’s 11”; what’s not to like?

Part two of the Unicron Trilogy picks up a decade after the death of Unicron with the Terrorcons attacking Autobot cities and setting their sights on Earth’s human population. The evil Megatron is revived, and once again it’s up to Optimus Prime and the Autobots to protect the Earth. As the pieces move across the galactic chessboard, each battle brings us closer to the end of the deadly and all-encompassing Armada-Energon-Cybertron universe.

An exceptionally good suspenser that just happens to be about two gay men. Sean Paul Lockhart (“Milk”), whose mother is mentally ill, stumbles upon Rob Moretti (“Crutch”) while ’net-surfing and falls head over heels in love. But he keeps his mother’s condition a secret, knowing that society unfairly stigmatizes people like his mother — and their families. Problem is, his mom’s condition may be hereditary, leading him to ever mounting, ever darkening acts as he seeks The Truth. We’ve certainly never seen anything like it.

For the unwashed, Calder (1898-1976) was an artist who, among scores of other things, invented — and perfected — the artform we call the “mobile.” This doc takes us into his magical world with all the usual talking heads (especially Arthur Miller, who practically needs sedation). But for us, the high point was Calder displaying his beautiful and childlike toy circus — made entirely of wire — to a group of artsy-riche surrealists, who clearly understand that they would never do anything in their lives to equal this man’s least creation. A wondrous look at freedom and genius.

Aka “Axeman At Cutter’s Creek,” this is a surprisingly entertaining no-budget horror entry with a strong ’80s vibe. The plot is a classic: Nine beautiful young people go to party at a (dum dum DUMM!) cabin in the woods, where local legend has it that a psycho killer lives. They get drunk, screw and then die horribly. Seen it? Not like this, you ain’t! With vets Tiffany Shepis and (Sheriff) Brinke Stevens, plus some great newcomers, who all get their faces ripped off. Enjoy.

Bodacious Igrid Pitt will forever be remembered for this wonderfully tasteless, bloody, colorful late-Hammer Studios nudity-rich PG-rated tittieflick (really!) inspired by the true tale of Countess Elisabeth Bathory, who bathed in the blood of virgins as a beauty regimen. Nigel Green from “Jason and the Argonauts” co-stars, as well as lovely Lesley-Anne Down (who doesn’t show ’um) as her inconvenient daughter. Now available on Blu-ray, resplendent in bonus goodies. A must-own for any cheesy movie collection.

A doc on the short, brutal lives of young boys — some as young as 2 — purchased or stolen from their impoverished families to become professional camel-racing jockeys in the Middle East. Surprisingly beautiful visuals form a backdrop to the (to Western eyes) comical sport, where the deadly and ungainly-looking beasts are goaded to win under the blazing desert sun by their extremely tiny riders, children who have forfeited their childhood in return for simple existence. We call it slavery.

This Dickens tale has been filmed roughly 10,000 times since the invention of movies, so why would you watch this one? Three big reasons: Ralph Fiennes, Helena Bonham Carter and Robbie Coltrane. Jeremy Irvine plays the pivotal Pip, a poor orphan rescued from poverty by an unknown benefactor. Fiennes is terrific as father-figure Magwitch, with “The Borgias” Holliday Grainger as the would-be girlfriend, and Carter as the other fem-fly in the ointment, Havisham. Coltrane’s role as Jaggers is small in comparison, but he always nails it.

This is the screwy gay equivalent of all those buddy-cop flicks of the ’70s and ’80s — plus a nod to the ’60s, thanks to a strong “I Spy” vibe — with a cast that features members of LOGO TV’s “Noah’s Arc.” Lots of shoot-’em-ups, car chases, foot chases, clue-sniffings, stakeouts, PI jargon and hardboiled interrogations lead to … well, we won’t spoil it. Party on!