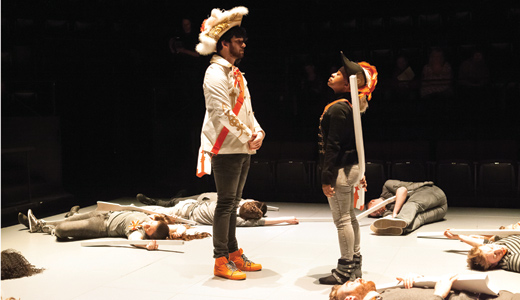 Actors Theatre of Louisville Artistic Director Les Waters was a frequently seen welcoming presence at this year’s Humana Festival of New American Plays. His bearded, wizard-like countenance hovered in lobbies as he checked the mood of the audiences. Inside the theaters, where in past years Apprentice Company actors often greeted audiences (and urged them to disable their cell phones), Waters often took on that role — and not just at press openings. He seemed to embrace the spirit of the festival and take a visible proprietary joy in what it means to theater and to the community.

As well he might. The 2014 Humana Festival will surely go down as one of the finest years in the history of the theater celebration.

And though an outsider can’t confidently assign individual responsibility for the success of a massive collaboration like the Humana Festival, the success of this year’s plays hinged notably on common artistic elements — especially an uncompromising fidelity to character and logic — that are indisputably the domain of an artistic director.

Since the Greeks, playwrights have written themselves into traps and used magic tricks to escape. Such trickery isn’t even difficult, given a dark room and an audience that’s predisposed to gullibility. These days, contemporary playwrights seldom resort to an actual Deus ex Machina. But they’re pretty free with emotional and intellectual sleights-of-hand: bait-and-switch plots, characters who inexplicably discover hitherto unknown motivations in the third act, and the always reliable sudden shock of a sexual revelation.

Instead of those tricks, this year’s Humana Festival offered the real magic of theater: outstanding writing, directing, acting and technical stagecraft. And though the festival is winding down, all productions remain in repertory through April 6.

The taxonomy of theater was smartly represented this year, which included: a comedy of manners (“Partners” by Dorothy Fortenberry); a heady intellectual drama (“The Christians” by Lucas Hnath); a madcap, sci-fi-flavored fantasy (“The Grown-Up” by Jordan Harrison); a poetic, tragic coming-of-age story (“brownsville song (b-side for tray)” by Kimber Lee); and a piece of what some might call “experimental” theater, though it hardly seemed innovative (“Steel Hammer” directed by Anne Bogart); a bright collection of skits paying homage to the Humana Festival’s history (“Remix 38” by multiple writers, fine work by the Acting Apprentice Company); and a set of 10-minute plays (premiering this weekend).

Clashing ideas and values drive “Partners” (directed by Lila Neughebauer) and “The Christians” (directed by Les Waters). Fortenberry’s script is witty, quippy and quotable, and she shows a fierce loyalty to the integrity of her crisply-defined characters; yes, there’s a bit of magic (a financial windfall), but here the magic isn’t the solution — it’s the problem.

“The Christians” is a courageously intellectual piece of theater. The promotional blurb (which mentions a baptismal font the size of a swimming pool) might imply a satirical attack on the spiritual vacuity of mega-churches. But instead, Hnath and Waters give us a grave drama shaped by a profound theological argument.

Great fantasy is always built around clear internal rules — and those are honored in “The Grown-Up,” which dishes up breakneck verbal pyrotechnics and great physical comedy under the leadership of director Ken Rus Schmoll. And though “brownsville song” is at the other end of the emotional spectrum, it is also rich in language and challenging ideas (and some superb acting).

As for “Steel Hammer” (created by the SITI Company; music and lyrics by Julia Wolfe; text by multiple writers; directed by Anne Bogart), the mystery is: How did a fine team turn a great concept into an embarrassing disaster?

It was likely the process rather than any individual’s failure. Trying to shoehorn a play into previously existing music was probably a bad idea from the start. So was the original music, which runs the sweaty, seditious legend of steel-drivin’ John Henry through a filter of hackneyed minimalist devices and disembodied female voices accustomed to singing medieval polyphony.

It was probably inevitable that the multiple authors would produce a bait-and-switch script, and that’s what happens. There’s some promise in an opening scene that delves into the rich and varied threads of the John Henry story, but soon the script devolves into shallow bumper-sticker slogans about race and gender. And eventually it turns into a silly, anachronistic jailhouse melodrama. Alas, even Bogart, whose choreographer’s eye for human movement has so often been brilliant in the past, can’t rescue this mess. Instead, she gives us monotonous repetition. And this is not a mindfully ironic tedium that might elucidate the plight of alienated works in an industrial age. It’s just plain dull.