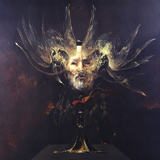 While metal is often theatrical in nature, there are some, such as Behemoth architect Nergal, for whom it isn’t an act. The depths of his convictions invade The Satanist with a morbid atmosphere that rings authentic in horrifying glory. This record sees Behemoth returning to their black metal origins, while also progressing and crafting more dynamic music that frequently slows and builds instead of relying purely on speed, like on the last few records. This makes for songs that pause to reflect in caliginous shadows before stampeding forward in due time with waves of murderous hate, a trait central to songs like “Blow Your Trumpets Gabriel” and “Messe Noire.” Not even Nergal’s leukemia almost killing him could stop Behemoth. If anything, it’s strengthened their will, as The Satanist is their improbably late pinnacle, 23 years into their career.