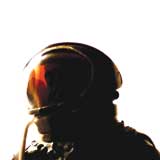 You hate to use the word “progressive” before rock only due to all of the horrible connotations: Overwrought, masturbatory, flagellating storylines and soloing masquerading as musicianship, prog is the A/V club of pop music. On paper, Wax Fang leader Scott Carney’s latest pushes its glasses far up the bridge of its nose: The Astronaut is a concept album whose story reads like “Gravity” mixed with “2001.” But let’s put that aside for a moment. With music as engaging and epic as this, concepts be damned — this is just a fantastic listen. The 16-minutes-plus “Part 1” is as incredible a piece of music as this town has ever created. If the story moves you, great; if it turns you off, still press play. The Astronaut turns prog on its head and comes for your lunch money.