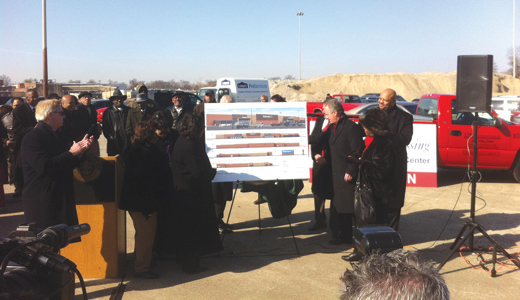 Last week on the long-abandoned site at 18th and Broadway in the West End, Mayor Greg Fischer announced what he accurately described as “the worst kept secret in the history of Louisville,” the construction of a new Walmart.

Since news of the coming Walmart deal leaked last fall, the lack of transparency about city negotiations with the company was criticized by labor groups and Councilwoman Attica Scott, D-1, while others expressed optimism about the news, citing much needed investment and jobs in that section of Louisville.

Fischer announced the city will spend a total of $1.9 million to buy property the developers need to build the Walmart Supercenter, with an additional $500,000 grant going to Walmart if the store “meets a threshold for local jobs of at least 225 local jobs per year.”

However, Walmart’s plan to hire local residents of the impoverished neighborhood is more wishful thinking on the part of Fischer’s office than a contractual requirement. Though Walmart says they plan to build a “career center” somewhere in the neighborhood, Fischer’s spokesperson Chris Poynter told LEO last week that there is no obligation for Walmart to hire any people from the immediate neighborhood in order to receive city money.

Additionally, the city extracted no requirements from Walmart to set wages above a certain amount, hire a specific number of full-time workers, or promise to protect workers’ right to organize a union. These were concessions that labor groups wanted Fischer to push for in his secret negotiations, citing the giant multinational corporation’s history of labor practices and studies showing their presence in a community can lead to net negative job growth due to putting competitors out of business.

Several Metro Council members praised the project at the Monday announcement, including David Tandy, D-4, who represents the district where the Walmart is to be built. Tandy described the new store as “a complete and total game changer” for Louisville, which would help “overcome the psychological barriers that are present for people trying to cross Ninth Street.”

“(This Walmart) allows for people for the first time to look at west Louisville in a new light and to recognize there are opportunities to work, to do business and to locate your families here,” said Tandy.

Councilwoman Mary Woolridge, D-3, was the only speaker to bring up concerns about the rate of pay Walmart workers will receive, but still praised the news as a step forward for the area. “I still will be hoping and monitoring how much these employees are going to be paid, benefits, etc.,” said Woolridge. “That is who I am. But we need economic development in west Louisville.”

Councilwoman Cheri Bryant Hamilton,  D-5, also praised the new Walmart, wagging her finger at the “unnecessarily negative and hostile tone” of people who criticized the lack of public transparency by city officials in their negotiations with the company. In fact, she even praised the move to keep Louisvillians in the dark. “I’ve always heard that loose lips sink ships,” said Hamilton. “And in this case, loose lips could have sunk this deal.”

The Rev. Kevin Cosby, the president of Simmons College who called critics of the Walmart deal “losers” on Twitter last week, said that investment such as this new Walmart could help prevent violence like what was seen the weekend before, as a large group of teenagers assaulted multiple people in downtown Louisville. Cosby then recited the lyrics to the theme song of the 1970s sitcom “Good Times,” ending with “Walmart going up, good times!”

Councilwoman Scott, who appears to be the lone critic of the Walmart deal on Metro Council, gave a rather pointed question to Council President Jim King, D-10, in the Democratic Caucus meeting last Thursday.

“Why is the city of Louisville giving a half-a-million-dollar grant to Walmart, the largest employer in the country?” she asked.

After an awkward 10 seconds of silence, King told Scott he would gather information for her and provide a response at a later time.

Sen. Mitch McConnell’s re-election campaign provided another accidental viral video last week, as they mistakenly included a clip of Duke’s basketball team celebrating their 2010 NCAA championship — first caught by LEO Weekly — which was supposed to be a clip of UK’s 2012 celebration. His “horrified” campaign pulled the video, replacing the Duke clip with a photo of UK’s star forward Julius Randle, only to also pull that video after UK sent McConnell a cease and desist letter over concern that this violated NCAA rules and threatened Randle’s eligibility just before their big game against U of L.

And just in case any fanatical UK basketball supporters in Kentucky didn’t hear about the mix-up, CBS made sure that it didn’t go unnoticed, as anchor Greg Gumbel devoted 30 seconds to McConnell’s screw-up just before the game began.

Though his GOP primary opponent Matt Bevin aired an ad during the game in which McConnell was seen wearing a Duke jersey with Christian Laettner’s old number, considering the number of people in Kentucky watching CBS at the time Gumbel highlighted McConnell’s blasphemous basketball error, it’s doubtful any negative attack ad could have paid for a more prominent placement.