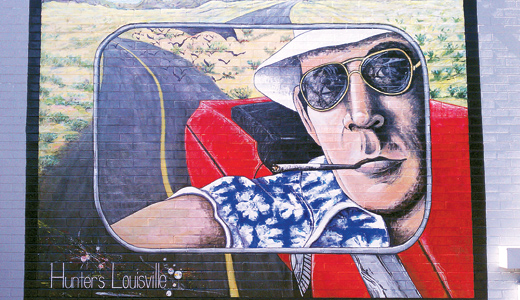 U of L, Belknap Campus

The best thing about buying used books is that you can take chances. Dropping a buck to purchase a paperback from an author you know little about is easy. Dropping $22 at Barnes & Noble for some current New York Times best-selling memoir that turns out to be a flop (or worse, fake) is 22 times more painful. With that in mind, it’s time to grab your wheelbarrow and head to U of L’s Red Barn to buy books by the barrel-full. Approximately 20,000 books, DVDs, CDs, vinyl LPs, video games and other media are available for purchase at the university’s annual used book and media sale this week. Most will only set you back $1 or $2. Organized by the Honors Student Council, the event benefits the pediatric oncology unit at Kosair Children’s Hospital. —April Corbin

The fifth incarnation of GonzoFest, Louisville’s annual celebration of all things Hunter S. Thompson, draws to a close this weekend. Both controversial and beloved, Thompson was a pioneering journalist best remembered for riding with the Hell’s Angels, penning Johnny Depp’s drug-fueled adventures in a certain Nevada town, and talking some serious trash about Derby. The fest, founded in 2010, celebrates Thompson’s contributions to art, music and literature, and it seems they’ve saved the best for last in this week of tributes and hoopla. From concerts, readings and puppet parades to a screening of the Ralph Steadman documentary “Life, For No Good Reason” (narrated by fellow Kentucky rapscallion Depp), a keynote address by Thompson’s widow, Anita, and the unveiling of the much-anticipated Hunter’s Gonzoville banner, the fest promises to go out with a delightful bang. —Jennifer Harlan

Now that the Humana Festival is coming to an end, it’s time to showcase a more local crew of playwrights, directors and actors in the annual Finnigan’s Festival of Funky Fresh Fun. This year there’ll be 11 short plays, directed by 11 locals and performed by 16 actors. The descriptions of some of the performances are equal parts intriguing and bizarre — David Clark’s “Hippopotamus in the Room” is an absurd look at love and large African animals; Ben Gierhart’s “The Art of Card Selection” depicts a character whose job it is to pick out greeting cards; and Eli Keel’s “Choke Room” gives an insider glimpse at haunted houses and the people who perform in them. The other plays focus on meth addiction, online addiction, feminism, unlikely friendships, and life on Mars. Bet you can’t get all that at a night out at Flanagan’s. —Sara Havens

Art begets art. For photographer C.J. Pressma, an early influence was the Fellini film “Roma,” when electrical sparks from a streetcar illuminated a nighttime city street. Fast forward to 2012, the year Pressma visited New Mexico and the place where his interest in dramatic lighting was used to great advantage. “One day, a guide took me to the remote site of an abandoned 1800s cattle ranch that overlooked the Pecos River,” says Pressma. “I could see a storm brewing miles away, and as the time passed, the late afternoon light combined with storm clouds was spectacular.” To highlight the surreal quality of his “Night Lights” photographs, Pressma has created soundtracks that will be playing in the gallery. The best time to experience the multimedia presentation will be during the April 4 First Friday Trolley Hop. —Jo Anne Triplett

‘Music and Films of Koen Holtkamp’

For this unique double-stuffed presentation, progressive composer/musician Koen Holtkamp (known as half of Mountains, whose records are released by Thrill Jockey; the influential label also released his recent solo album, Motion) performs, and screens some of his shorts (films, that is — it’s not really springtime yet). In addition to the 8 p.m. official performance, the public is welcome to drop in from 6-8 for a “meet the artist open soundcheck” (though soundchecking might prove difficult if too many want to meet the man at once). The cheaper tickets are for students, who can learn much in a night here. This event is part of Dreamland’s “First Friday Subscription Series,” intended to make your Trolley Hop more musical and interactive, adding inspiration and culture to that crappy free wine you got down the street. —Peter Berkowitz

It’s time to say goodbye to Louisville Ballet artistic director Bruce Simpson. “Complementary Voices” is his final production, as well as the season ender, so he made sure he packed a lot into the program. The triple bill features Ma Cong’s “Tethered Pulse,” Adam Hougland’s “Fragile Stasis” and Val Caniparoli’s “Spaghetti Western.” “Tethered Pulse” mixes classical ballet with Chinese folk dance. Set to cello solo, Cong describes it as a dance “about people finding a relationship based on emotional rhythms and feelings.” Hougland is Louisville Ballet’s resident choreographer; his “Fragile Stasis,” full of athleticism, chaos and moodiness, was created for the company in 2007. A ballet based on Spaghetti Western films? It’s got to make you curious. Caniparoli will present the world premiere of his dance with costumes by Sandra Woodall. —Jo Anne Triplett

I usually shy away from organized conventions because the topics just don’t hold my attention enough to give up an entire afternoon. But then I heard about this Cocktail Culture Conference, and my outlook began to change. Organized by U of L and Drake University, the event spans two days and is fairly reasonable — the morning sessions at the Brown Hotel are free, and the afternoon sessions at St. Charles Exchange are $10 and include drink samples. Some of the more interesting topics include “Cocktail Culture, Idealized Feminity and Post-War Cocktail Dress” by Lori Hall-Araujo (independent); “Hangovers, Hairs of the Dog, and the Inevitability of Excess” by Stephen Schneider (U of L); and “Confessions of a Cocktail Nerd” by Sonja Kassebaum of North Shore Distillery. I’m participating in Saturday afternoon’s panel discussion on Louisville’s own cocktail scene. Mom is proud. —Sara Havens

Our last moments with a person are usually not labeled as such. Death or departure is often abrupt and unexpected, transforming the seemingly ordinary moments that preceded them into powerful memories. “Lady Day at Emerson’s Bar and Grill” focuses on one such moment. The musical play re-imagines one of Billie Holiday’s last public performances, at a seedy Philadelphia bar in 1959, just four months before her untimely demise. “Lady Day” features more than a dozen musical numbers interlaced with between-song banter that reminisces on the extraordinary life of a jazz performer whose music still registers with ears and hearts today. Janelle Hunnicutt tackles the titular role in this Bunbury Theatre Co. production, which runs until April 20 at the Henry Clay Theatre. —April Corbin

The first thing you need to know, to avoid any confusion, is that artist J. Cobb’s day job is art director of this publication. Before you go accusing us of playing favorites, we’re here to say, “Heck, yeah, we’re playing favorites!” If he wasn’t a favorite, why would we have hired him? They don’t just give these jobs to any … well, anyway, while the artist may remain the same, the art being unveiled at Ultra Pop! on Saturday is a bit different than what Cobb brings to LEO each week. This show, entitled “Fiends of the Apocalypse,” will reveal much more about his subconscious — or conscious — than the average News of the Weird fan might expect. His pen and ink will folk you up! —Peter Berkowitz

Two of Chicagoland’s finest improv/rock/noise/art/jazz musicians, cornetist Rob Mazurek and bassist Darin Gray, come together at Dreamland for an evening of solo and/or duo performances. Mazurek, who will perform with his Chicago Underground Duo (with drummer Chad Taylor) at the Kentucky Museum of Art and Craft on April 24, has also spent time in Brazil. Over two decades, his résumé has included Isotope 217, the São Paulo Underground, Exploding Star Orchestra and many more. Gray has been paired with drummer Glenn Kotchke in On Fillmore, worked with modern guitar legend Jim O’Rourke, and been a member of the bands Grand Ulena, Dazzling Killmen and Brise-Glace (again, as well as many more). For any making assumptions, leave those way before the door — trad jazz might happen, only to get stomped on by heavy rock or electronic beats. —Peter Berkowitz

Danielle Elise Bartley had a bad year. “I remember being barely three weeks into January, and 2013 already knocked me on my ass,” says the Western Kentucky photojournalism graduate. Her exhibit “January,” on display this month at Day’s, is all about her terrible, horrible, no good, very bad year. “Heartbreak and then a string of unhealthy manic relationships that always landed me in far worse situations, friends dying, so much debt, too much pride … I felt like I spent 2013 running from one bad thing and not noticing I was running right into another,” she explains. Bartley turned to her camera for comfort and began creating photos that helped her process her drama. For her, this exhibit is “like finally ending an awful chapter in a better book,” she says. “What I want people to take away from the show: Always stand back up.” —Sara Havens

Hot off its world premiere at the SXSW festival, award-winning documentary filmmaker Beth Harrington’s “The Winding Stream: The Carters, The Cashes and the Course of Country Music” is a must-see for anyone who cares about roots music — and that should be all of us. The tale of the Carter Family (originated by A.P., Sara and Maybelle) is an American epic, full of tragedies and triumphs and even a flash of scandal here and there, and Harrington’s chronicle of the saga is a moving one — well-researched and featuring interviews with family members including Johnny Cash, Rosanne Cash and Carlene Carter, proving the circle remains unbroken. This is part of the Clifton Center’s vital Southern Circuit Film Series. —Jason Howard