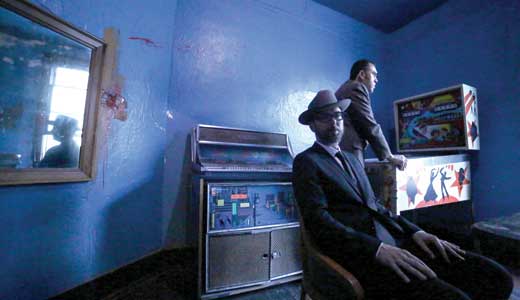 ‘Gem of the Ocean’

Playwright August Wilson’s 10-production “The Pittsburgh Cycle” chronicles the black experience in the 20th century and earned him two Pulitzer Prizes. This week, U of L’s Department of Theatre Arts and the African-American Theatre Program present “Gem of the Ocean,” the earliest-set play in Wilson’s important and moving epic. Set in 1904 Pittsburgh, the play follows a “soul cleanser” believed to be nearly 300 years old and her efforts to help a young black man who seeks forgiveness for a crime he committed. The production is guest directed by Clinton Turner Davis, who last visited Louisville back in 2005 for an Actors Theatre production of “Pure Confidence” by Carlyle Brown. —April Corbin

Remember the past? Greyhounds do, and they’re bringing it back today, à la Rock ’n’ Soul, Vol 1. But before you get your Hall in my Oates, think instead about the Black Keys and all them cats. Greyhounds is a duo, improbably “somewhere between Broken Bells and Sam Cooke … full of raw emotion and Southern grit,” according to some blogger who underestimates Sam Cooke. Their debut, Accumulator, is released by Ardent, a name familiar to fans of Memphis music long gone (The Austin Chronicle likes the band’s “blend (of) Memphis funk with a pleading falsetto”). Also old school, keyboardist/vocalist Anthony Farrell finds old keyboards and fixes them up (’80s Casios being a favorite, if less funky, brand). Guitarist/vocalist Andrew Trube collects old makes of his instrument, too, and he clearly knows how to make them sing. —Peter Berkowitz

When Voices of Kentuckiana calls itself “all inclusive,” it isn’t joking around. This community choir doesn’t hold auditions. Instead, it welcomes everyone, regardless of the person’s sexual orientation, ethnicity, religion or musical ability. Don’t worry — this doesn’t mean the group sounds like a bunch of howler monkeys. Voices knows how to put on a great performance, and they truly embody a sense of community and celebration. For their 20th anniversary performance, “Voices Goes Platinum” at the Clifton Center, the group will showcase a variety of songs, from iconic anthems like “Imagine” by John Lennon and Broadway musicals like “Rent” to contemporary ditties like “Just the Way You Are” by Bruno Mars. —April Corbin

‘Thunder at the Cressman’

One of the things I like about all the activities that surround the Kentucky Derby is how they combine what we already love. Fashion? We got your Derby ties and socks right here. Food? Stuff your face with varieties of horseshoe-shaped candy and bourbon balls. Art is not left out of this Derby lovefest. The Cressman Center for the Visual Arts is again merging glass and fireworks with its latest “Fire & Art” event that benefits U of L’s Hite Art Institute. The attached parking garage is the perfect place to see Thunder Over Louisville. In the time before the explosions (the Cressman Center opens at 3 p.m.), you can watch student artists in the glass hot shop, see movies, eat and do family activities. Reservations are required; contact Linda Rowley at 852-8403. —Jo Anne Triplett

Have you had many chances to see living legends up close? If so, were they in an airport, or in New York while on vacation — or were they playing some of the music that made them so … wait for it … legendary? The Mercury Ballroom has only been open (at press time) since today, and already they’ve got Booker T. uh, booked, for your Saturday night on the town. The Memphis native first achieved fame in the 1960s as the organist and bandleader of Booker T. & the MGs, the funky, soulful (and racially integrated) instrumental quartet who helped start the also-legendary Stax Records. Since then, he’s played with and/or produced Ray Charles, Willie Nelson, Neil Young, Bill Withers and many more. In 2009, Jones signed to Anti-Records and resumed his solo career. See him while you can! —Peter Berkowitz

In this week’s cover story, you read about filmmaker Lance Bangs’ latest project, a long-in-the-works documentary on the groundbreaking band Slint and the ’80s Louisville underground scene. Now, a night before that film’s Headliners screening, Bangs will be at Dreamland screening some of his other, shorter works: music videos, short films, live stuff and more from some fun names — R.E.M., Nirvana, The White Stripes, The RZA, Sonic Youth, Sleater-Kinney, Elliott Smith and Earl Sweatshirt, for example. The man is a Zelig of the modern post-punk underground and on the cutting edge of hip-hop, and is ready for his half-career retrospective. The only question is, can you wait to see what his next 20 years bring? Sorry, you’ll have to. But this is a good way to check in, look back and see some great music. —Peter Berkowitz

Straight outta Silver Spring, Md., guitarist Jeff Barsky is Insect Factory (and vice-versa). “Spider-Man” fans might be surprised by what happened when Barsky got bitten, though — as label Fabrica Records says, his six-string work focuses on “texture and mood, building layers of dense sounds that slowly evolve into hypnotic and atmospheric drones.” In other words, this is a dude who puts out a record called Melodies from a Dead Radio; while you might think Demi Lovato sounds like death, this is a much different type of “melody.” He performed at Louisville’s Terrastock Festival in 2008, and tonight is joined by fellow sound explorers Public Speaking (Brooklyn’s Jason Anthony Harris, who sings on his knees while surrounded by manipulated sounds) and locals mAAs, the duo of Shedding’s Connor Bell and Dreamland artistic director Tim Barnes. —Peter Berkowitz

I recently visited the Tim Faulkner Gallery at its new location. As we walked through the massive space, I was continually drawn to an assortment of paintings of rifles, money and skulls (not my normal areas of interest). Faulkner said they were created by Brent Estabrook, a U of L dental school student with a degree in art. These paintings had me puzzled. It turns out it’s not the subject matter but Estabrook’s technical skills and use of swirling color that had my attention. “This collection of artwork is intended to redefine social and cultural icons in modern-day society,” says Estabrook. “Color and texture manipulation are used to produce familiar images that are uniquely my own. The broad variance in subject reflects the diversity of my personal interests, including anatomy and mechanics.” —Jo Anne Triplett

Edward Snowden’s stated motive for leaking thousands of classified documents was “to inform the public as to that which is done in their name and that which is done against them.” Local artist Keith Stone was inspired by this new information on our American surveillance state, and the result is his new “Look at me!” exhibit of digital images and interactive sculpture at the Garner Narrative gallery in NuLu. Stone’s digital art depicts electronic surveillance and privacy ethics as an Orwellian dystopia of Obama-faced drones and government propaganda, needling our new age of Patriot Act powers and NSA eavesdropping on our electronic communications. The exhibit runs through May, whether you love Big Brother or not. —Joe Sonka

The snow may glow white on the mountain tonight, but here on the banks of the Ohio, 17 artists are bringing to life glistening glass creations that would make Queen Elsa proud. In a departure from the blown or hot-sculpted glass usually showcased, “MASS” features cast glass pieces, a technique that has been used since Ancient Egypt and Rome to create captivating pieces whose shimmering forms look as if they could’ve sprung from a Disney princess’ fingertips. From a sunset-hued tablet to a swarm of crystalline bees baptizing a child’s brain with a drop of amber honey, the pieces are imaginative and mesmerizing. “There is something really beautiful about large chunks of glass existing like some sort of never-melting ice,” says gallery manager Tiffany Ackerman. “The thickness of the glass plays with light and seems to sum up the magic of the substance.” —Jennifer Harlan