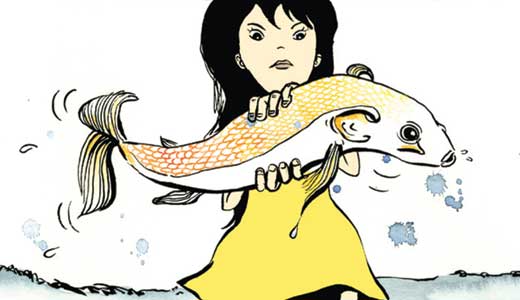 ‘The Ghosts in Our Machine’

“I feel like I’m a war photographer and I’m photographing history. I’m photographing changes in history right now in terms of animal rights and where it’s going,” says photojournalist Jo-Anne McArthur in the documentary “The Ghosts in Our Machine.” The film documents the plight of animals in captivity living within the “machine of our world.” Similar to “Blackfish,” which showed the awful conditions of captivated killer whales at Sea World, “Ghosts” examines the animals we often refer to as “property” — like dairy cows and captive foxes — through McArthur’s lens as part of the We Animals project. U of L’s ECOREPS, a sustainability outreach organization, and GRASS, an environmental group, hosts a screening Thursday night of “Ghosts,” followed by a panel discussion afterward. —Sara Havens

Is a recording of a musical performance an honest representation of the composer or performer’s intentions? Is the experience at all comparable to witnessing music’s creation in person? Did you think enjoying music would have a test? David Grubbs has written a book, “Records Ruin the Landscape,” about the conflict between music’s creators (especially from the avant-garde side) and the listeners who absorb their music, most likely these days in a different way than intended. For folks who don’t write simple pop songs, the live display of their expression can never truly be replicated (no record listener will ever see John Zorn frantically signaling his players on where to go next, for example). And now, more of it is available than ever before. Grubbs will discuss the thesis with Tim Barnes, and also play a solo set. —Peter Berkowitz

It’s almost the weekend, honey, so let’s go shake it out with HNNY, who’s traveling all the way from Sweden just to see us (and several other American cities over the course of several weeks). Yes, Pooh, the Local Talk, Let’s Play House and Puss labels’ fav (aka Johan Cederberg) will be spinning some of the best old and new sounds he samples — you might hear something familiar or brand new, or both at once, from old instructional records to new house loops. He calls it all “soft and sweet and sexy,” so bring your girlfriends. And if you were wondering what honey he likes, he told Weplaywax.com, “There are a lot of good Swedish honey flavors, but the one I always eat is a very good one called ‘Natur Honung.’” JP Source and OK Deejays support. —Peter Berkowitz

‘An Evening with Buster’

Almost 153 years to the day after the Battle of Fort Sumter that kicked off the Civil War, the Frazier History Museum will hold two special screenings of the classic 1926 comedy-adventure silent film “The General,” starring the great Buster Keaton. An original score will be performed live by the local Tamerlane Ensemble, known for its fusion of bluegrass, jazz and chamber folk music. The event will have popcorn and a cash bar, and tickets will include admission to the Frazier’s special exhibition, “Long May She Wave: A Graphic History of the American Flag.” Tying together these two features is Major Robert Anderson, the Louisville native and Civil War hero who fought for the Union against the Southern aggressors at Fort Sumter and helped give the American flag the meaning it holds today. Doors open at 6 p.m., so give the exhibit a look before you get your Buster on. —Joe Sonka

Don’t let the weatherman fool you — spring has sprung, and that means it’s time to shake those frozen bones awake and take this party we call life to the streets. If your block isn’t popping off just yet, make your way to Astro Black/Fat Rabbit and Lisa’s Oak St. Lounge in Germantown for the Astro Block Party, which just happens to coincide with Record Store Day 2014. Peruse a bevy of new and used records and local wares while grooving to live sets (from 1 p.m. on) from Anwar Sadat, Wax Fang’s Scott Carney and Whistle Peak’s Billy Petot, along with a host of Sophomore Lounge out-of-towners. The Holy Mole food truck will be posted up there, too. Records, bands, beers, tacos — if you’ve got a better way to celebrate the season, we don’t wanna hear it. —Sam Benanti

Greta Smith and the Egrets

You won’t have any regrets after seeing this great singer-songwriter and her backing band. Greta Smith, a fan of globe-trotting, eavesdropping and John Prine (though she happens to be younger, shorter and much more feminine), has performed for several years around town as Egret, but has lately taken the bolder step of putting her own name out front — it’s always been her with friends, and now it’s more official. Smith celebrates the release of her new album, Old Girls (the title has not been confirmed at press time as definitely referring to Dolly Parton’s chest) with compatible locals Quiet Hollers and Paso Robles’ finest, Miss Shevaughn & Yuma Wray. It’s a smart and surprisingly sensitive night of fun for those in the early days of adulthood. —Peter Berkowitz

There’s many in Louisville and Southern Indiana who want to put their arms in the air, spin around and scream, “It’s finally spring!” While I’m not entirely convinced it will not snow tomorrow, I’m loving the pinks, whites and purples of the blooming trees that hover over the green grass. Meg Krakowiak’s solo exhibition, “Surrender to Color,” has that same feel to it. "Creating a unique expression of what I see and appreciate around me is a constant challenge with never-ending rewards,” she says. “I strive to get the colors, textures and movement I feel onto the canvas.” Her show is perfectly timed. So let’s follow her suggestion and surrender to her colors that remind us of the beauty of our surroundings. It’s long overdue. —Jo Anne Triplett

Don’t let the name of Block Party Handmade Boutique’s latest exhibit fool you into a false sense of glitter and feeling like P. Diddy. “Party Animals” has nothing to do with the new, sans dollar sign sing-talker Kesha. It’s Old Louisville resident Amy Wiedl’s whimsical and tasteful exploration of the hidden life we all imagine animals to have. As the artist statement reads, “Behind their instinctual behavior and fight to survive, who’s to say animals aren’t planning to let loose and party a little?” There’s plenty of reason to party. The exhibition marks the one-year anniversary of Block Party Handmade Boutique, a collaborative community and retail space that currently features more than 60 local artists. —April Corbin

Here’s some good news for all you single people out there — apparently there’s no such thing as a lonely afterlife in China. If an unmarried person dies, it’s believed the deceased will be forlorn and possibly haunt its living family. So in a match made in heaven, two corpses get hitched so they can be, literally, together forever. This ancient tradition of “ghost marriage” has come to life in the graphic novel “The Undertaking of Lily Chen” by Danica Novgorodoff. The illustrations from the book are at the Kentucky School of Art at Spalding University’s 849 Gallery. The novel tells the tale of Deshi, who, after accidentally killing his brother, must quickly find a “bride” for him. Novgorodoff traveled to the Shanxi province in 2009 and set the location of the book there. —Jo Anne Triplett

‘Give Peace a Chance’

Everybody’s talking about bagism, shagism, dragism, madism, ragism, tagism, this-ism, that-ism. All we are saying is give peace a chance … It may be 45 years old, but the words and message behind John Lennon and Yoko Ono’s “Give Peace a Chance” has never been more relevant. On a local level, we’ve got council members suggesting the city invest in drones. On a national level, we’ve been at war for more than a decade. Seems like we could all use a reminder about what’s best for humanity. The Muhammad Ali Center’s “Give Peace a Chance” exhibit gives us an opportunity to do so, by exploring through stories and photos the famous seven-day “bed-in” John and Yoko used to promote peace. The exhibit leads up to (and through) next month’s Abbey Road on the River festival. —April Corbin