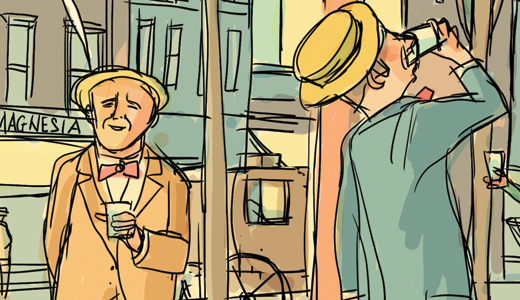 The struggle of reproductive rights and justice in Kentucky has been an uphill battle over the last few decades, and those on the frontlines of the current battle are holding their annual program and dinner in Louisville on Thursday to pay homage to their heroes and discuss the landscape going forward. The ACLU of Kentucky will celebrate the 25th anniversary of their Reproductive Freedom project at the annual Carl L. Wedekind Bill of Rights Program, which includes a panel discussion on Kentucky’s long struggle for women’s equality. Eleanor Jordan, executive director for the Kentucky Commission on Women, will facilitate the discussion, which features Louisville Attorney Mikki Adams; healthy policy director of the Foundation for a Healthy Kentucky Gabriela Alcalde; and Fayette Family Court Judge Kathy Stein, who will be honored for her years of work protecting reproductive rights in the Kentucky General Assembly. —Joe Sonka

It’s way beyond fair if Steve Coogan, 48, feels he’s been underappreciated. Much modern comedy of the past two decades — everything from “Curb Your Enthusiasm” and “Eastbound & Down” to the two most famous versions of “The Office” — owes a large debt to Coogan’s “knowing you, knowing me” ahead-of-his-time cringe comedy. A-ha! The character of Alan Partridge (co-created by “Veep”’s Armando Iannucci) is from such an earlier time that he debuted on a British radio show. Going back to 1991, the character, a critique of showbiz and media types who get far with minimal knowledge or skill, has also had his own TV programs, and now — thanks to Coogan’s rise in American movies, from “Tropic Thunder” and “Night at the Museum” to “Philomena” — stars in his own. —Peter Berkowitz

It’s been nearly five years since the King of Pop went to the big Neverland in the sky, but his music continues to live on, as it should. The “Michael Jackson — The Immortal World Tour” comes to the Yum! Center this weekend for a musical/dance experience Jackson would approve of. Created by Cirque du Soleil, the show features 49 international dancers, musicians and acrobats — all set to Jackson’s music in a concert format. One of the dancers in the show, Giulia Piolanti from Italy, performs in the “I Just Can’t Stop Loving You” number. Piolanti was mesmerized the first time she saw a Cirque show and never imagined she’d ever join the company. “I always thought it was out of my league,” she says. She suggests you check your inhibitions at the door and feel the music. “This show is better than anything you can imagine.” —Sara Havens

Becoming a full-fledged hippie who lives off-grid with a nearly nonexistent ecological footprint isn’t appealing or practical for the majority of people today. Still, we could be doing better. In the daily struggle to balance cost, eco-consciousness and being supportive of our local businesses, there is surely room for a little improvement in all of our lives. Find some inspiration on how to do just that this weekend at the seventh annual Mighty Kindness Earth Day Hoot. Interact with dozens of community organizations and businesses that are doing their part to protect our waterways, mountains, green spaces and all the creatures on them. Discover new products and causes to feel excited about. Shop local products and art. Groove to bands from around the region. Mingle with thousands of your neighbors. Oh, and eat delicious local food. Can’t forget about that. —April Corbin

Ledisi is halfway through her second decade in music and is still playing with identity and definitions. Her first album was independent, back when “alt-R&B” was briefly a thing, followed by DIY album two, the jazz-flavored Feeling Orange But Sometimes Blue, still her strongest start-to-finish player. Verve came calling, and a couple of largely satisfying adult-contemporary R&B records followed. Now she has released The Truth, a decidedly younger-sounding album that may lack in warmth, but what stays is that impeccable voice. With a wild range from whispers with restraint to a wail that would make Chaka whither, Ledisi is the proverbial phonebook singer. Accompanied by the great Robert Glasper Experiment, a headlining group worth more than what I paid for my Groupon tickets by themselves, this is the only option in the city for a Saturday night. —Damien McPherson

Clean those glasses or put a fresh pair of contacts in — it’s time to look your ass off at all the arts and crafts at the 43rd annual Cherokee Triangle Art Fair. Some people go to shop. Some go to mingle and people-watch. And some go to drink from and collect plastic souvenir cups that take up unnecessary space in your cupboards all year long. It’s just tradition — a tradition that marks the start of spring and, even better, the beginning of the Derby binge. This year, there will be more than 225 booths in the juried art fair, as well as live music, food, drink and the popular valet parking service for bikes, provided by Bicycling for Louisville. And remember — leave your pups and skateboards at home. Be prepared to run into more former schoolmates than you’d care to. —Sara Havens

This festival is for all who love the fiber and textile arts. While the Indiana Fiber and Music Festival is aimed at artists and those who love their wares, it will also feature producers and growers doing demonstrations and sales. There will be vendors from Indiana, Kentucky, Ohio and Illinois who specialize in natural sustainable products. Expect to see yarn, spinning wheels and looms as well as llamas and alpacas. In addition, there are workshops, competitions and a “spin-in/knit-in.” That’s part one of the festival — part two is music. The long list of musicians includes local favorites John Gage, West of Dublin and Troubadours of Divine Bliss. They will also set up a jam tent for those who want to bring their instruments and jump right in. —Jo Anne Triplett

Ben Katchor is one of the greatest artists alive, especially if you appreciate comic strip — old-timey comic strip — art. With the skills of a master and the heart of a lovable old crank, Katchor has created such hugely important (and entertaining) books as “Julius Knipl, Real Estate Photographer” and “The Jew of New York.” He’s also contributed to The New Yorker and RAW, draws a monthly strip for Metropolis magazine and has been both a TED Talker and a recipient of the MacArthur fellowship, also known as “The Genius Grant.” A professor at Parsons in New York, Katchor’s weekend includes an afternoon of talking and workshopping at KMAC, while an exhibit opens Saturday afternoon at the nearby Cressman Center. See it all — but reserve a space for the KMAC events online first. —Peter Berkowitz

Hometown son Nick Dittmeier has been other places but never really left Kentuckiana. Look at that name — that’s a local, not a Hollywood creation like that hooligan Harry Styles. Sure, Bruce Springsteen left home for Hollywood eventually, and who knows where the future will take Dittmeier (a nominee for Best Songwriter at last year’s Music Awards show)? But for this mid-Derby season Sunday afternoon, just long enough after services end and the laws roll over, he’s unveiling his latest locally-grown product, new album Light of Day, at a place that supports the arts, creativity, community spirit and, perchance, getting totally blitzed. And all this during a time that’s fun for the whole family! —Peter Berkowitz

“Stop playing with your food!” is a time-honored parental demand for children. Either Mari Mujica’s Peruvian parents didn’t say it, she wasn’t listening or she just plain decided to ignore it, because, as an adult, she plays with her food. A lot. Then photographs it. The exhibition “Repurposed Ingredients” consists of digital photographs she began “taking the day I decided to play with the food scraps I was setting aside to take out to my compost,” says Mujica. “Once I began, I could not stop. Shapes, color and texture began to acquire personalities … and interrupted many a meal preparation. This process led to imagining the possibilities of each ingredient and to their rearrangement, in some cases, into faces, personalities and styles of their own.” —Jo Anne Triplett