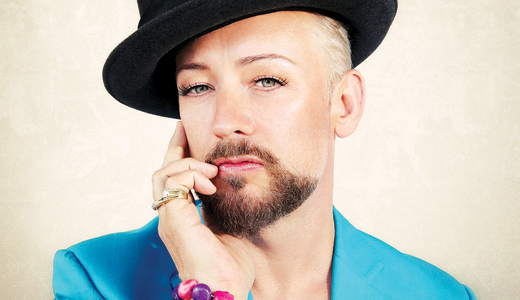 Start your day off with the ultimate party, celebrating International Jazz Day at the downtown branch of the library. Party! From noon until 1 p.m., U of L Jazz Program director Michael Tracy will perform with students from all over the world. Speaking of, the party continues at 7:30 p.m. at the Carnegie Center in New Albany (Newcomers, don’t be scared of New Albany. Yes, it’s weird that it’s in a different state. Get over it) with the legendary Jamey Aebersold Jazz Quartet (also free). If you don’t know, educator and saxophonist Aebersold was recently honored nationwide as an NEA Jazz Master, probably the biggest award possible for a jazzer to achieve (though less profitable than selling more copies of a record than Miles Davis did). —Peter Berkowitz

Since 2005, Swedish post-punks The Skull Defekts have been making some of the most challenging music around. The band’s often clangy and atonal sound has tempered over the years, congealing into a lineup that manages to hypnotize — or paralyze — their audience into a tribalistic lull. It’s weird but true that a band can be that simultaneously noisy and ambient, as if the Skull Defekts listened to Lou Reed’s Metal Machine Music and filtered that through Steve Reich and Shellac. That renowned Lungfish vocalist Daniel Higgs joins the band only further cements their position as a band that needs to be seen to be believed. Higgs and crew are making music that somehow channels the spirit of cyberpunk and ancient Earth religion, although how the two meld so seamlessly is beyond my capacity for words. —Syd Bishop

Even if you don’t get anywhere near Churchill Downs or a red-carpeted celeb party, the folks at The Bard’s Town want you to enjoy Derby just like everyone else — but slightly different. Starting tonight, they’ll host The Great Creamboat Face, where participants have to navigate a track via tricycle, making beer stops on each lap. Sounds like a recreation of a “Revenge of the Nerds” scene. Thursday is the 24th annual Wing Ding, which features 50-cent wings, $2 drafts, an ice luge and live music by the Jake Parker Band. And weekend festivities include the Stable Barn Party, a show by Improv Anonymous on Friday followed by “Drunk Karaoke,” and a “Drunk & Sailor” pirate sing-along Saturday night. If you’re looking for laughs, just tell the taxi to drop you off at the Bard’s Town for the weekend. —Sara Havens

On the first Thursday of each month, Louisville’s mellow, music-loving mayor, Greg Fischer, hosts a locally-centric free concert for all his serfs (though it’s hardly ever surf music concerts, ironically). Tune time happens in a section of Metro Hall called the Mayor’s Gallery — it’s actually a beautiful space, ripe for concerts or other theatrical-type productions; in fact, it’s so nice, it seems out of place in a building full of desks, suits and security guards. This month’s attraction happens to be Alex Wright, a doctor by day and singer-songwriter by other days. Doors open at 11:30 a.m., and all shows are first come/first served. No outside drinks can be brought in, because the place is super-nice, but they’ll give you some Louisville tap water (it’s famously good). —Peter Berkowitz

Rock ’n’ roll, burgers, beer … and helping to save the environment: Could anything be a better combination than that? The Friends of the Ohio River Greenway have set up this benefit, starring local heroes Cabin, to raise funds for their 501c3 volunteer group (your $20 donation is tax-deductible) while you turf-party on. The Greenway they serve is a seven-and-a-half-mile area between Jeff, Clarksville and New Albany (the latter becoming Big Four’s second home this year) on the Ohio River. And BFB&B, of course, is the new-ish joint near Jeff’s river where you can get delicious items such as their Henry Baines Burger and Warm Bleu Cheese Pimento Spread — great, now I have no choice but to go eat there right now. Thanks a lot, Cabin and Friends! —Peter Berkowitz

Southern Culture on the Skids

When I came across the listing for this show, I couldn’t believe they had packed so many powerhouses into one night. It was like Christmas on Derby. Not only will Southern Culture on the Skids be mixing up a batch of banana pudding for the show, but Ms. Honkytonk herself, Wanda Jackson, will take the stage before, and local favorites The Ladybirds will go on before her. It’s almost like someone got ahold of my list of Bands I Want to Play at My Funeral and assembled them the night before Derby. I hope this doesn’t mean my time here is coming to an end. If it is, I suppose I should spend my last moments dancing the night away on stage with some fried chicken. Who’s gonna join me? Expect SCOTS to play some familiar favorites as well as new stuff from 2013’s Dig This! —Sara Havens

It must be nice to be Marc Vedo this month. The DJ recently released a mix album in the Hotfingers Talks series with turntable partner George O’Dowd, the 52-year-old man still professionally known as Boy George. While the latter is still best known as the seductive and/or scary singer of the popular band Culture Club in the 1980s, he has spent much of the past two decades DJing. Now George has released a new pop album, without Vedo, but still makes big bucks on gigs like this, as the record industry committed suicide a decade ago. And yet Boy George is alive and well, thankfully, and celebrating Louisville’s biggest holiday/brief horse race with us on Friday night (well, more like 1 a.m. on Saturday). —Peter Berkowitz

After a long alcohol-soaked day at the track or wherever else you’re celebrating Derby, some might be ready to call it a night and prepare for the next morning’s recovery. For everyone else, Varanese Restaurant welcomes you to its annual Billy’s Burger Bash, which begins at 11 p.m. and lasts until the wee hours of the morning. The free event includes live entertainment from Lamont Gillispie and 100 Proof, drink specials, sun-burned drunk people dancing, and a late-night menu of appetizers, bar bites, burgers and fries. The party is named after longtime NBC field producer for the Derby, Billy Rapaport, who you might be able to spot along with one of those Real Housewives, or an original member of Menudo or 98 Degrees if luck is truly on your side. —Joe Sonka

Galerie Hertz co-owner Billy Hertz wants to thank Sister Cities of Louisville for making this exhibition possible. “Nearly 20 years ago, (Silvia Willkens) came to Louisville from Mainz, Germany, for a Sister City art exhibition, (and we) have been close friends ever since. John Nation and (I) were the first two American artists to formally show in Perm, Russia … another sister city. On (our) way home … (we) stopped in Mainz, where Nation and Willkens were first introduced.” The inspiration for the show “Demoiselle et Garçon” is Pablo Picasso’s 1907 revolutionary masterpiece “Les Demoiselles d’Avignon” and the numerous portraits he painted throughout his long career. Nation’s photographs feature portraits and nudes, while Willkens’ portraits are of a few of the women romanced by Picasso, a notorious rake. —Jo Anne Triplett

This is a stat I like repeating: We are one of only four cities in the U.S. with an Olmsted park system. Not just the parks, but also the connecting tree-lined streets, such as Eastern Parkway. Started in 1891, Frederick Law Olmsted and his sons designed 18 parks and six parkways for Louisville. It’s been a love affair ever since. Artists are excited about the parks, too, with the Kentucky Plein Air Painters showing their second exhibition especially for the Olmsted Parks Conservancy (the first show was in 2010). The 26 artists, who created around 80 paintings, are donating 20 percent of their sales to the Conservancy. “We spent last spring, summer and fall in the parks painting and loved every minute,” says gallery owner Jane Morgan. “Parks are for people!” —Jo Anne Triplett