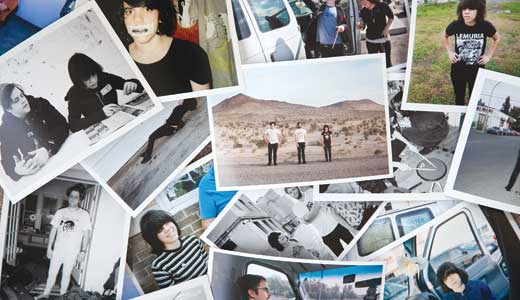 The Louisville Outskirts Festival is currently being planned for this fall. The fest will celebrate musical acts that include women, from solo artists to multi-piece bands that include at least one member who is female. It is a not-for-profit, volunteer-run operation, which means they need money to bring in acts from outside Louisville (though the fest will also feature many local acts, as well) and pay for other expenses — promotion, officially endorsed permits, paperwork and much more.

The weekend-in-progress will also go beyond music, making educational outreach and other community-based programs part of their mission. Ultimately, their goal is, in their words, “to encourage, support, inspire and highlight the music made by women and female-identified members of Louisville’s independent music scene as well as showcase influential and inspiring musicians selected from other parts of the country and world.”

To raise some of the necessary funds, the fest — thought up and being run by half of Julie of the Wolves, guitarists/vocalists Stephanie Gary and Carrie Neumayer (the latter is also a LEO columnist) — is throwing a party that should help give locals a sense of what to expect this fall. After opening sets by the Debauchees, a band that includes two women and a man, and the Wolves, four women, headlining attraction Screaming Females will make hairs stand up all over everyone’s bodies. The decade-old New Jersey-based rock trio (one woman, two men) released their Live at the Hideout album yesterday. Having recently survived a van accident while on the road, LEO wanted to check in and see how they are doing now.

LEO: After triumphing over death and delivering a definitive live document of the band at the top of its game, what do you do to follow that up?

Jarrett Dougherty (drums): I don’t think we are really thinking about it that way. We always want to be working on and releasing different projects. It is exciting to be releasing this record because we have been talking about it for so long. It is still fresh. We are already headed into the studio to work on a new album that should be out in the fall. It is going to be a big year for Screaming Females. I hope everyone has been saving their pennies.

LEO: I invested poorly, and only have enough money for one record this year. Should I buy Screaming Females or (side project) Bad Canoes?

Marissa Paternoster (guitar/vocals): The Bad Canoes tape is $5. How poorly did you invest your money?

JD: You should buy our records, because I play on them.

LEO: You’re touring with The Julie Ruin — is that a dream come true? Do you see (frontwoman) Kathleen Hanna as an idol or as a peer?

MP: I view Kathleen Hanna as a stellar human being whom I deeply admire, who was in a bunch of bands (Bikini Kill, Le Tigre) that meant a lot to me and continue to mean a lot to me.

LEO: Chris Christie — what’s up with that guy?

JD: He’s a politician. Clearly he is a terrible person.

LEO: Your show here in Louisville is to benefit the Louisville Outskirts Festival, a new festival promoting female-centric bands. How do you feel about there needing to be such a festival now, 40 years after women started achieving something like equality in this country? Sorry to have to ask the “woman in rock” question, but the context demands it this time.

MP: Until being a woman who happens to play music professionally (or otherwise) becomes less of an oddity and doesn’t create chaos within the minds of everyday folks, I suppose music festivals of this nature are somewhat of a necessity to show the general population that not only are women often in bands, but they are often quite good at what they do.

LEO: Follow-up question for just Jarrett and (bassist King) Mike — what’s it like to be a guy in a rock band? Does Marissa have to play all your parts in the studio for you?

JD: There are no stupid questions, except that one.

Screaming Females with Julie of the Wolves and The Debauchees
Thursday, April 10
The New Vintage
2126 S. Preston St.
newvintagelouisville.com
$10; 9 p.m.