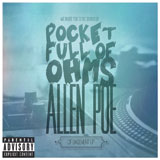 One-third of Frankfort’s Basement Up, Allen Poe’s Ohms is beautifully produced, from blog favorite “Gina” (featuring Von Pea) to “Grand Entrance” (with Sheisty Khrist and DJ Calcutta). Poe plays to his strengths and is starting the year off right; a son of ’90s true school hip-hop, his beat selections show a strong ear, and Ohms plays with a cohesiveness his group’s earlier work has lacked. Reaching from the state capital to the country’s, “Prescience” includes D.C.’s yU of Diamond District on a jazzy LoFidel track, making for one of many highlights. “Make Motivation” is the only skipper, the dirty production burying Poe’s already limited voice. Allen Poe may never make anyone’s top emcee list, but he will forever have Ohms on his résumé, an album stronger than many regional emcees will ever hope to release.