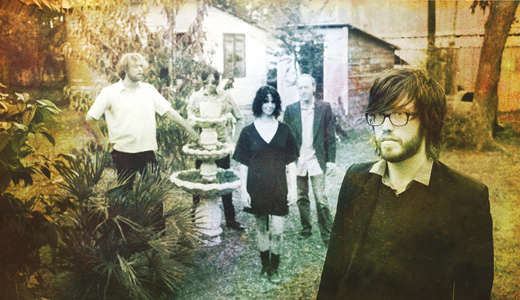 “You’re not the first to ask me this question, like, ‘Are you trying to grab for some brass ring?’ or ‘trying to be more respectable?’” says Okkervil River frontman Will Sheff. “The truth is, the record was finished before we signed with ATO. It was a pretty organic process.”

ATO is the RCA-affiliated label started by Dave Matthews. For most of their decade-plus career, Okkervil River’s records have been released by the Bloomington, Ind., label Jagjaguwar. The band’s latest record, The Silver Gymnasium, is a concept album inspired by Sheff’s memories of growing up in the 1980s.

The setting finds the band adding more mainstream instrumentation, including synthesizers and an unironic saxophone. The album has a more lush sound than 2011’s I Am Very Far, which Sheff calls “confrontationally big and spiky and angry … I kind of designed it to push people away.” He was ready to do something different this time.

“I had this idea to write about childhood, and it was a really important idea to me, and a really interesting idea to me, so I didn’t rush into doing it,” Sheff says, clarifying that he initially had the idea several years ago. “I was working on it in the back of my brain, and it was … just time.”

The question about reaching for a more mainstream crowd also tied in to the fact that, on the day of our interview, Okkervil River was playing at the North Carolina club Cat’s Cradle, for the “I don’t know — fifth time? Sixth time?” Sheff says. Their Louisville show finds them breaking newer ground, as the first to play Louisville’s newest club, the Mercury Ballroom. The band wasn’t picked intentionally for the opening, and Sheff wasn’t aware of the significance of this date until our interview — but it is something new for a band that’s now a veteran act, yet still not a mainstream entity.

Sheff, 37, has lived in Austin, Texas, for almost 15 years now, and remembers when its SXSW music festival was smaller. A question about the fest provoked an epic rant:

“I hate it. I think it’s horrible. I think it’s a cancer on rock ’n’ roll. I think it’s deeply, deeply evil … Once upon a time, it was good. Once upon a time, it was this wonderful way to get exposure for these little bands that were really special; it was also very embracing of the Austin community. Any Austinite who had $5 in his pocket could go out to a local club and see five really cool bands you wouldn’t have known about otherwise. Now it’s this whole corporate gangbang where that same little band SXSW was created to help — they pool all their money, they try to travel down there, they have to buy plane tickets or rent a van, and it costs $4,000, and the festival gives them no money at all. Then they put them on Wednesday night at some weird non-venue, and nobody comes, and the people who come are just staring at the goddamn telephones, or drunk on free booze from some fucking corporation.

“Then you have the megastars, like the Lady Gagas of the world, who turn it into this staging where they try to keep their own megabrand current, and every fucking corporation — they’re all trying to get their piece of it. And there’s a very small group of very wealthy people in Austin who are just raking in so much fucking money, and the way they’re raking in money is by pimping out the spirit of Austin to all these fucking out-of-towners who feed their egos: ‘Oh, I love Austin! Have you had the migas at this place?’ It’s disgusting. It’s everything I think is bad about the music business.”

He laughs and apologizes for venting, but the depths of his feelings about his work have been revealed. In a follow-up question about The Silver Gymnasium, Sheff discussed why he doesn’t have children.

“I don’t know if it’s feasible for an artist like myself to have kids. I have a really low overhead, and that’s part of the reason why I’m able to do as much work as I do. My most important thing is my work.

“The world doesn’t need more of them, anyway. There’s a fuck-ton of them,” he laughs. “I think we need to work on making fewer people who are better.”