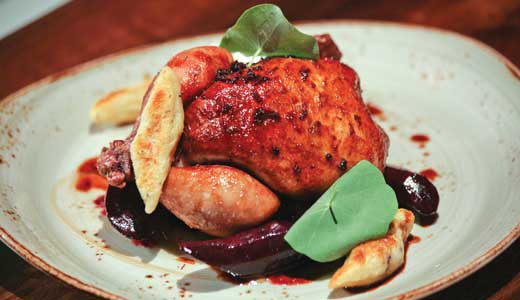 Just weeks after smacking a home run with El Taco Luchador, their tiny taqueria-style eatery in the midst of the Baxter Avenue fun zone, the team of Fernando and Christina Martinez and Fernando’s cousin, Yaniel Martinez, have slammed another rocketing blast high over the left field bleachers with The Place Downstairs.

The place, specifically, is downstairs (via a quick elevator ride) within Mussel & Burger Bar, another of the Martinez’s growing list of restaurant success stories.

With Chef de Cuisine Ethan Ray in the kitchen and the affable Rick Moir, late of Equus and Jack’s, presiding over a skilled team in the front of the house, The Place Downstairs hit the ground running after an extended series of “soft openings” last month.

It is already generating such a buzz, and operating — for now — on a tightly constrained schedule of dinner on Wednesdays through Saturdays only, that you’ll want to take advantage of its reservations policy and stake your claim on a table now. By Derby, it’s likely to be one of the hottest tickets in town.

Who knew Mussel & Burger Bar even had a basement? You’d expect subterranean spaces in urban environments like NuLu, for instance (consider, for example, the lovable space beneath Decca), but suburban shopping centers aren’t generally known for the space beneath.

The team has worked wonders in this space, creating a mood that’s stylish and elegant, yet cool and casual, with a comfortable lounge and two dining rooms. Bold red walls and cream-color banquettes, undraped wood tables and comfortable off-white chairs might sound bright, but the large drum lamps overhead are turned down low.

Ray, one of the city’s top “young chefs” as a newly minted 30-something, is quickly building a top-chef résumé. His experience at the Seelbach Oakroom with chefs Todd Richards and Duane Nutter, followed by service at Proof on Main and Metropole, 21c’s Cincinnati venture, stands revealed in Downstairs’ creative and beautifully plated dishes.

His bill of fare draws on an international range of flavors and bears a distinctly personal stamp that might pay homage to Alinea or even El Bulli — but is too individual to pigeonhole. It features seven small plates, four “jars” (rich confits ironically served in small canning jars), and seven entrees. Local and seasonal ingredients are used well; I expect the menu will change with the season. Pricing is invitingly reasonable, with most entrees topping out in the $20s.

Thoughtfully chosen, affordable wine and beer lists offer interesting selections, and there’s an intriguing array of cocktails. We indulged in two creative items: The Cat and the Farmer ($12) was described as “a salad in a glass,” and that’s fair, if you can imagine a delicious liquid salad of cucumber and dill with Hendricks gin. The Global Warming ($12) will certainly warm you. This potent potion of Tito’s vodka and St. Germain elderflower liqueur adds a ball of spicy poblano pepper ice cream. Served in an icy copper mug, the frozen chile pepper adds oomph as it warms and melts.

As for the food, let’s put it this way: At the end of a leisurely, two-hour-plus dinner, we de-briefed: Were there any rough spots in the road? Any problems, sputters or flaws? Any dishes less than outstanding? No, no, no, no and no. In a word, outstanding.

From a surgically constructed bite-size amuse bouche of fingerling potato dressed with creme fraiche, pea sprout and pork crunchies to artful dessert plates, chocolate cremeux ($9) and key lime and Meyer lemon tart ($9), we couldn’t find a nit to pick. “We ate way too much” is not a legitimate complaint.

An Iberico ham small plate shone in its simplicity: Thin slices of Spanish ham were served with grilled baguette slices. Anything more would have been excess.

The duck leg rillettes “jar” ($9) was filled with rich, deeply flavored duck confit, a paste of finely shredded duck meat and duck fat. It was accompanied by cornichons, grainy mustard and a tart-sweet cherry compote, with slices of grilled crusty baguette.

We somehow made room for the aforementioned desserts and were glad we did. An exceptional dinner rang up the cash register at a very reasonable $82.68, and exceptional service earned a $20 tip.