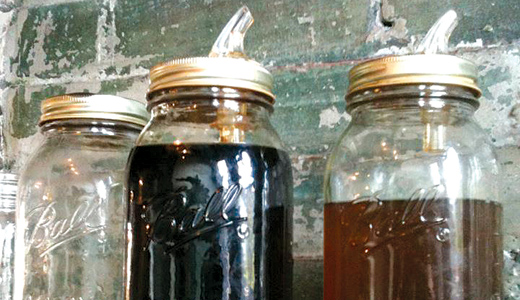 When the tea-infused hooch Hillbilly Tea sold for two years suddenly disappeared off the menu back in December, it wasn’t because the drinks weren’t popular. Customers loved them and were constantly giving feedback, says owner Karter Louis. It was the Alcoholic Beverage Control department that took issue with the hooch, leading to its removal from the menu and leaving Hillbilly’s owners so frustrated they have nixed plans to expand their business within the state.

Up for debate is infusion drinks and whether they are more like the adult beverages made in distilleries or the cocktails made in almost every bar across the city. Liquor laws are nuanced and sometimes antiquated. According to ABC officials, those giant frozen margarita slushy machines are legal because they are essentially giant mixed drinks. One might assume sangria made by the pitcher is the same, though the officials LEO spoke to couldn’t confirm because they didn’t know how sangria is made.

Infusion drinks like Hillbilly Tea’s hooch are thought of differently, explained James Mims, the director of Metro Codes and Regulations, because the process of creating them involves changing the product and essentially inventing a new one. “It’s a matter of degree,” he says.

An example: If someone makes tea, adds liquor to it and places it within a whiskey barrel to age or ferment a little, then that process is considered beyond your typical cocktail and needs to be regulated more like the distilleries, even if there are no grains or heavy duty products involved.

According to Louis, an ABC representative told him that in order to be compliant, Hillbilly Tea could infuse their drinks within the liquor’s original bottle and that moving the liquor from its original bottle to another container was the issue. The restaurant’s general manager didn’t want to do that, saying it was impractical, so they decided to pull the hooch off their menu altogether. The decision has resulted in a dip in alcohol sales, which the business is feeling, even if sales account for a smaller percentage than food and tea.

“There seems to be no precedent set,” says Louis, adding that he doesn’t understand why it took two years for someone from ABC to crack down on his hooch. “Our push back is, why are you suddenly picking on us?”

Hillbilly Tea plans to sell their hooch by the bottle. It’s an expansion Louis said he would have once loved to bring to Kentucky, but he’s decided against it. “I’m from here. Hillbilly Tea was homage to my home and Louisville. I want to do it here, but I understand the business part. If there will be pushback from ABC, then … Well, my partners have said we can do this in Tennessee or Ohio.”

Louis says he is currently speaking with liquor makers. Shanghai, he adds, is itching to work with him and trying to get his partners to produce the hooch there. It’s a stark contrast from the resistance he has felt here. “As an entrepreneur, I expect my community to support me.”

After the hooch is available, Louis says he’ll have Hillbilly Tea’s Louisville location just buy the product from itself. He contends that an ABC employee has said that this, too, is illegal, though gave no thorough explanation. “I’m just tired of hearing about what I can’t do,” says Louis.

On their role in all of this, Mims and others from ABC say they are willing to work with any businesses to figure out what steps need to be taken for infusions to be legal. They say they have only done warnings and that nobody they’ve spoken to is in serious compliance trouble.