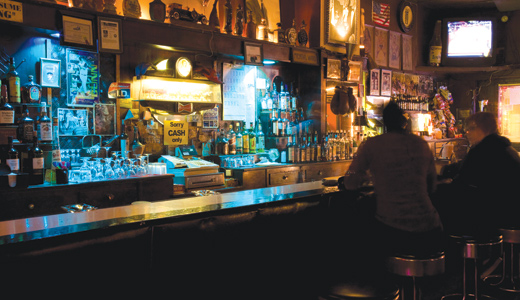 Sergio’s is the Land of a Thousand Beers. Literally. Tucked away in the Butchertown neighborhood, what Sergio’s lacks in bells and whistles it makes up for in having the widest damn beer selection you will find in the Metro area. Odds are, you will be able to find any craft beer you’ve ever heard of, and maybe a few from a country you’ve never heard of. (They have not one, but two, beers from Namibia.) Sergio’s also has an interesting food menu (try anything with their “magic cheese”) and plenty of tables and booths in the back room. But if you’re looking for Keystone Ice or Bud Light, the only place you’ll be able to find those are on signs in the bathroom, the location of which is not an accident. Sergio’s is cash only, so bring a heavy wallet along with a healthy liver, unless you don’t mind the ATM fee. —Joe Sonka

Freddie’s Bar & Lounge opened in the heart of downtown Louisville 52 years ago, and though I wasn’t around back then to know for sure, I doubt it has changed much at all since then. While tourists fill the neon Cordish bars of Fourth Street Live just a few blocks away, Freddie’s is the locally-owned, cash-only and ATM-less time capsule where you can sit in a booth in a dark room, throw back your cheap drinks, and let the locals who have been around the block tell you the real story about what’s going on in Louisville. Boxing memorabilia of the owner hangs throughout the bar, which is mixed with old folks and your random hipsters most nights. And those nights are long — they close at 4 a.m. with no exceptions, and are open 364 days a year. Standing outside the bar last week, as a limo emptied into the historic Brown Hotel across the street, a young gentleman wearing cat whiskers and “smoke a blunt” written on his forehead could only shrug when asked what that was all about. There’s your genuine downtown bar experience. —Joe Sonka

Seide’s is a perfect marriage of Highlands and Germantown cultural ambience, whether you’re a local or visiting for some equine-related event. Quibble over its borders, if you must (we say it’s in Paristown), but the important thing is that this is a great bar. As you walk in, you realize it’s mostly just one room (like a one-room schoolhouse, but one where you learn about booze). They also have a bonus, smaller room tucked away, like a drag queen, in the back, where you can shoot pool and/or hide from an awkward encounter with an ex. In addition to a smart selection of drinks, the staff is friendly and with-it, the renovated not-long-ago booths are comfy and stylish, and — like many spots in town — it can be quiet and relaxed most nights before 10 p.m. Their Saturday night DJ night, featuring DJs Narwhal and Sam Sneed with a guest each week, is one of the best in town. —Peter Berkowitz

Is Holy Grale the best bar in Louisville? Kentucky? Between here and Chicago? Probably. Is that a lot of hype? It sure is. Do I ask a lot of questions? Yeah, I should probably slow down with that. Inspired by bars all over Europe, especially fun places like Belgium, Holy Grale (like their siblings, the Louisville Beer Store and Gralehaus) is laser-focused on finding the greatest stuff available in the entire world. It’s a big job, yet they make it look easy. This isn’t the kind of place you go to if you want to complain about your job/spouse/kids to your friend you’ve known since you were 5 (we’re looking at you, Louisville) while putting up with a tasteless, pointless Miller Lite. No, this is where you go to find something you’ve maybe never tasted before, or imagined was even possible, with a name you may never be able to pronounce. Fairy tales can come true, it can happen to you. Also, their food is amazingly delicious and inventive and necessary, on top of all that. And it’s in an old church, so you never know when cool Pope Francis might stop in. —Peter Berkowitz

The newish NoWhere is what some call “fashion flexible” these days: It’s a gay bar, but it’s also not. Whereas bars were necessary 30 years ago exclusively for LGBTQ drinkers to socialize without being hassled, today’s progress has made it much easier for anyone — gays, straight or flexible — to hang out together, whether for drinking, hooking up, watching a game or getting down on one’s good foot. NoWhere’s Facebook “about” section states, “Video and dance bar specializing in electronic dance music.” It’s definitely more glitter than grit — for Oaks Day, they plan to host a Red Bull DJ truck (bet you thought those were three different things, yes? NoWhere brings things together), plus cocktail specials and the popular Glittertitz DJz duo (a weekly Friday favorite, even on a “normal” week). So take your best gal pal or boy friend, slip on some stylish (yet comfortable, lord willing) shoes and get glamazon’d up for this industrial-strength hot spot (located in what was for many years a health foods store, ironically). —Peter Berkowitz

I know you’ve driven by the Maple Inn in Jeffersontown many times, and perhaps wondered, “That’s a strange building for a bar — is it an old Ponderosa or Rax?” Well, the old don’t-judge-a-book adage should apply to bars as well, because the interior of the Maple Inn is warm, welcoming and wide open — offering plenty of room to show up with a party of 12, or just kick it alone while saddled up to the bar. Four pool tables, a handful of TVs and both indoor and outdoor patio furniture are scattered around the room, and the bar offers an open mic on Thursdays and live music on Saturdays. For a place that’s been around since 1939, the Maple Inn keeps it simple. Cash only, buster. And no roughhousing. —Sara Havens

Jake’s Mr. G’s came to life when hair was big, Steve Perry first stepped out on his own, and “Footloose” made Kevin Bacon the other white meat. The year was 1984, and a man named Jake wanted to open a place where his Middletown neighbors could blow off some steam and enjoy each other’s company. Jake has since retired, but his place remains a popular East End watering hole. Jake is a big horseracing fan, so horse memorabilia decorates the dark, rustic tavern. Friendly bartender Tonya will give you the scoop on anything and everything — from ladies’ night on Wednesdays to which regular patrons are single. She also told me Wick’s Pizza originated in Mr. G’s kitchen. How ’bout that! —Sara Havens

Rumors’ mantra is “Where neighbors become friends,” and I couldn’t agree more. The welcoming Middletown institution has been serving up some of the best hot wings in town for 28 years — and with the wings has doled out thousands of ice cold beers and tropical cocktails like rum runners, piña coladas and Mai Thais. If Jimmy Buffett took up residence in Louisville, you’d find him at Rumors, sporting a Hawaiian shirt, saddled up to the bar and sucking down oysters on the half-shell. In fact, many flock here for the Rumors Oyster Roast, Gulf Coast oysters steamed and served in a frothy bucket, Carolina-style. Daily drink specials keep things interesting. The night I popped in, rum runners were $3.75! —Sara Havens

I’d call the newly renovated Bud’s Tavern the “Check’s of Shively.” Neighborhood folks come for some down-home food — in the form of delicious smoked barbecue — and friendly bar banter. The place has been around forever — some of the regulars I talked to remember it from the ’70s, when there was carpet on the walls — but the bar came under new ownership in 2011 and got a much needed makeover and scrubbin’. Now, pulled pork, brisket, fish fingers and fried green tomatoes keep the regulars happily fed and satisfied while they sip on pints of beer or bloody marys. A popular lunch takeout business also keeps Bud’s busy and bustling. —Sara Havens

This little Iroquois neighborhood bar has been kickin’ it since 1947, and its devoted clientele of area regulars keeps the place lively and lit. For a small one-room space, it’s got enough entertainment to keep you out of bar fights — including two pool tables, eight TVs, darts, a punch-bag game and six Jell-O shots for $5 all day, every day. The prices are admirable as well — $1.75 domestic bottles most of the day, except during happy hour, when they dip down to $1.50. That’s $7.50 a bucket, y’all! Situated between a dentist office and a gynecologist, Peppermint Lounge is the perfect dive bar to tuck into after either of those visits. —Sara Havens

I remember when O’Connell’s was located in Highview and had hundreds of dollar bills stuck to the ceiling. Now, they’ve relocated to a new strip mall on the corner of Fern Valley and Shepherdsville roads and declared themselves a sports bar that could rival the likes of BW3’s in the South End. With a tall warehouse-like ceiling and space, O’Connell’s offers 16 taps of beer, a huge liquor selection (including more than 20 Pinnacle vodka flavors — have you tried the Swedish fish one yet?) and TVs everywhere the eye can see. Of course there’s pool and some assorted video games, but the Irish pub seems like a good place to unwind for the thirsty after-work crowd. And the prices? My Miller Lite pint set me back a mere $2 and was pleasantly ice cold and crisp. —Sara Havens

Syl’s Lounge is the best bar in Louisville. Period. Last week I ventured out to the West End to visit this bar for the first time, and that was all the experience I needed to make such a declarative statement. Syl’s is a small bar packed with nice people, cheap drinks and a red glow — from the carpet to the lights. I highly suggest their karaoke nights (Monday and Wednesday, and occasionally Friday), where you’ll hear some damn fine singers belting out soul classics while walking throughout the bar, table to table, with the wireless mic. On those nights, the grill is firing outside, where you’ll find some of the most delicious barbeque you’ll ever sink your teeth into (try the rib tips). On May 1, they’ll have their Derby party, which you won’t want to miss. If you’re the type of white person who is uncomfortable being in a bar full of African-Americans, you probably won’t like Syl’s, but I’m pretty sure I wouldn’t like hanging out with you, either. —Joe Sonka

Big Four Burgers in Jeffersonville has certainly upped the ante in the great Louisville vs. Southern Indiana debate. This hip new burger and craft beer joint offers one of the best views of the Louisville skyline on one of the most chill patios in the area. The bar boasts 17 taps of respectable beer — from Flat 12 and Fat Tire to locals like BBC and New Albanian — and just one of Bud Light, for people like me who sometimes fancy fluff. The fun part is — the beer is served in throwback Ball jars, and for just $2 more (for my Bud Light), I could get mine in a 24-ounce jar. Boom! The build-your-own burgers are equally delicious and cooked to your standards, and the fries come in regular, garlic or sweet potato. The historic building has certainly come a long way since its days as the Third Base biker bar, and when that damn Big Four pedestrian bridge is finally finished, I suspect more unaware Louisvillians will gladly take a walk for a burger and a beer any day. —Sara Havens