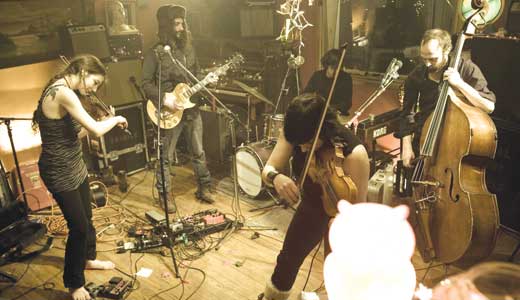 For an activist and rebellious musician like Efrim Menuck, one of the hardest parts of touring these days is finding a good playground. Or a museum, or someplace else to go during days on the road. Not exactly for him, though — Menuck and his partner, Silver Mt. Zion violinist Jessica Moss, have a son, Ezra Steamtrain Moss Menuck, who will be 4 years old this summer.

“It’s exhausting! It’s tiring having a kid out on the road with you, but he’s having a good time. I wouldn’t recommend it for everyone, but it works for us,” the elder Menuck says. “But it’s hard to come up with activities some days.”

What does Ezra like to do? “What doesn’t he like to do? Lots of arts and crafts, lots of running around — he’s got a push scooter, he likes to roll around on that. Mostly, he just likes hanging out with the band.”

One might think that a 43-year-old with a young child would be carrying around less rage about injustice. Such a person doesn’t know Efrim Menuck well yet.

“I feel more angry since my son was born than I did before he was born,” he says. “It’s a lot harder to just resign yourself to things with this innocent little creature that’s pure of love and hope and innocence and light … and you know you’re hoisting him into a world that’s gonna do its darndest to beat the shit out of him. That’s a horrible state of affairs to try to grapple with.”

“I feel like things have gotten a lot worse in my lifetime — and they didn’t start out that great,” he adds. “It’s not like we were born into a glorious, hopeful age. But it seems to get heavier year after year after year.”

Surely things must be getting better now, years beyond Bush and Cheney?

“It doesn’t seem like that, right? I guess viscerally, not seeing those ass clowns on TV every night, but functionally, things seem a lot worse. I mean, in Canada — I can’t pretend to speak for the United States.”

In the U.S., some Louisville music has inspired Menuck through the years — Will Oldham, The Sonora Pine and “Slint, obviously,” he says. “For sure, a good town for bands.”

A discussion of Slint leads Menuck to address the notion of “post-rock,” the genre some label his bands as falling into. “The ‘post-rock’ thing is pretty lazy, because there’s not a lot of commonality with a lot of the bands (that get lumped into the genre tag). There’s some generic, like, ‘win-the-race’ kind of music that’s uplifting in that way, but in Godspeed and Mt. Zion, we’ve rejected that term.”

The guitarist/pianist/vocalist, also known for his groundbreaking work with fellow Montreal band Godspeed You! Black Emperor, still identifies as a punk rocker. “We’re coming out of rock, we’re coming from a rock place, and we make no bones about it. But we came of age in a time where we’re familiar with the limitations of rock music, but we’re still able to love it.”

The latest Mt. Zion album, Fuck Off Get Free We Pour Light On Everything, their seventh full-length, was released in January. (A new remix EP, Hang On To Each Other, will be in stores on April 29, and possibly for sale at shows.) It’s arguably their rockist work to date. If there’s a theme to it, it speaks to the troubles of raising a child in today’s world.

In the past, Menuck says, they’ve usually worked songs out live before going to record them in a studio. This time was different, as the band went to the studio without much written or honed. “We had a couple songs we’d been playing live; the rest, we wrote a couple weeks before we went in the studio,” he says. “Definitely, this time there was more freedom to come up with a thesis and write the songs to fit the general thesis.”

One thing Menuck can’t do is intentionally try to make a hit to pay for Ezra’s expenses. “I don’t know if we could write a popular song if we tried.” Though life on the road is different now, “Whatever impact (having a child) had has been more existential.”