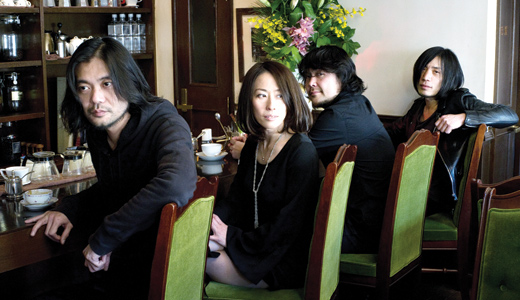 This week, we bring you a few highlights from what’s going on in music this week in Louisville.

In order, the three loudest and most intense things I’ve ever experienced were: standing less than 50 feet from an airplane engine starting up; Sunn O))) playing at the Southgate House; and a tie for third between Mono and Mogwai. I say loud and intense because — in every possible sense of the word — I was literally moved by these bands on every level, physically and mentally. Fortunately, the Japanese post-rock quartet Mono is returning to blow the doors off Headliners with their face-melting rock. Still touring on the strength of their beautiful 2012 full-length album For My Parents, Mono masterfully move between subtle, atmospheric vibes and tremendous, distortion-soaked peaks. Opening the show is Young Widows, whose simmering doom serves as a natural counterpoint to Mono’s extreme dynamic play. I’d get there early for a good spot; the show is 18+.

Reuniting after more than two decades, UK shoegaze legends Loop have only begun playing out again over the past few months, so their stop in town, thanks to local promoter The Other Side of Life, is an especially fortunate event. Loop’s fuzzed-out psychedelia is less like contemporaries My Bloody Valentine and more like a stoner-rock version of the Jesus and Mary Chain. In their music — a hypnotic swirl of distorted lead work and buzzing bass — it’s easy to hear their influences, which seem to range from the Velvet Underground and the Stooges to krautrock bands like Faust or Neu. Opening the show are hometown heroes Coliseum, themselves fresh off of their 10th anniversary tour, and Lansing, Mich., indie-shoegazers The People’s Temple.

Tara Jane O’Neil helped build the foundation of both the Louisville scene and the then-burgeoning national indie scene. As a founding member of Rodan, O’Neil helped define an era through her contributions as bassist/vocalist with the band, and via her role in the cult classic indie film “Half Cocked.” O’Neil later went on to such renowned acts as Retsin and The Sonora Pine, and has collaborated with Ida, Come and Sebadoh, to name a few.

Throughout her various projects, O’Neil has also found the time to put out solo albums, and her latest solo album, Where Shines New Lights (released through the Kranky label), is her seventh full-length. When pressed for her inspiration, O’Neil, 41, says, “Inspiration? Hard to say … life.”

It’s this humility that informs the album’s aesthetic. Logistically, though, O’Neil is very matter-of-fact about her songwriting. “Sometimes I sing while I’m writing, but it’s without words,” she says. “There is the rare jewel of a song that comes complete with both. I write words and music separately. The real trick and magic is to find that beautiful fit of rhythm and words (or non words). It generally takes some doing.”

Having created a wide range of songs over two decades, O’Neil has a delightful choice for one of her favorites. She explains, “I did this three-hour drone with Warren Defever (of the band His Name Is Alive) once. He called it ‘Sunship.’ We started an hour before the audience was invited to the house where it happened.”

Having played with so many bands over the years, O’Neil’s favorite performance was something outside of indie or punk rock. “I think maybe the show in a very old temple in Japan” was her favorite, she says. “After we did our song sets, the monk who lived at the temple agreed to perform also. He played three stone bowls. My world was forever changed.”

O’Neil is certainly thankful of her résumé, though, modestly noting of her experiences, “I’ve been lucky to play with many wonderful songwriters and musicians.”

O’Neil was scheduled to play locally this week, but that has been postponed. In the meantime, change your world at kranky.net/artists/tarajaneoneil.html.