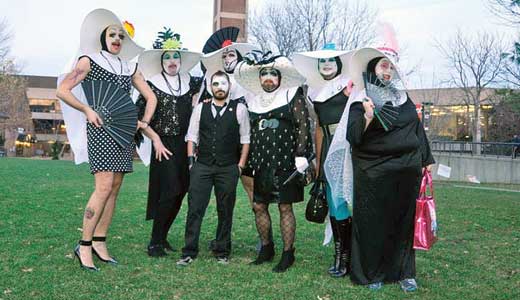 The sight of half a dozen full-grown men in white face paint, inch-long eyelashes and head-to-toe nun habits is too strange to not ask about, even here in Louisville. It takes less than 10 minutes of sitting outside with them on Big Bar’s patio on a chilly Saturday in March for a stranger walking by to inquire about these extravagant getups.

A woman scream-asks this in excitement and wonder from the sidewalk as she strolls by with two of her friends. These men aren’t doing the kind of drag most people are used to. There’s no attempt to look feminine here. Most of the dudes have beards, and their garments are more muumuu than queen.

One of the men — going by the name Sister Sweet Epiphany — walks over to greet the strangers. She is wearing latex KISS-esque platform boots, a vest covered with skulls and a knee-length black nun garb that shows off those shapely legs. Sister Sweet Epiphany explains to the passersby that the group isn’t dressed like this for a costume party (though this does happen to be leather daddies’ night at Big Bar). They are spreading a message about love, fun and acceptance in all forms.

Sister Sweet Epiphany is one of the first members of the Derby City Sisters, the new local chapter of the Sisters of Perpetual Indulgence, an international social justice organization with a 35-year history of advocacy and charitable work.

Back at the table, Derby City Sisters founder Sister Velveeta Von Tease looks on behind her own fake eyelashes and smiles, adding, “We are a conversation starter.”

The Sisters of Perpetual Indulgence began in San Francisco’s notable gay neighborhood, the Castro District, on Easter 1979 by four gay men who wanted to promote joy and diversity while exposing bigotry and hate. Since then, the organization has expanded to include more than 60 chapters (called “mission houses” to mirror their religious influence). These autonomous units are spread out across the United States and as far away as Switzerland and Australia. Collectively, these mission houses have raised millions of dollars to support their own assistance programs and local charities. Historically, assistance centered on HIV/AIDS and LGBTQ issues, though most have expanded to be inclusive of any people considered on “the edge” of mainstream society.

The backbone of many orders is what’s sometimes called “bar ministry.” Most obviously bar ministry includes promoting safe-sex practices through personal goodie bags filled with resources. Tonight, the Derby City Sisters are handing out baggies filled with a condom (male or female), lube and two breath mints — one for before, one for after. On a deeper level, bar ministry is about reclaiming the symbols and religious power that often seems to run in contrast to alternative lifestyles.

Sister Velveeta Von Tease, whose real name is the much less catchy Ryan Phillips, hopes Derby City Sisters might evolve into doing both. “There are so many great organizations here in Louisville,” he says. “We hope to bring something new and exciting by supporting them. We want to bridge gaps. We want to bring a strong sense of community. … It’s about the ministry of presence. Letting people know we are there.”

To that end, the gender-bending getups are both an icebreaker and an invitation for nonjudgmental conversations or discussions you otherwise might not have. It isn’t meant as a complete mockery of Catholicism or religion, says Phillips, who insists the sisters come from a variety of religious or secular backgrounds. The ridiculousness of the costumes and the silly names are meant to help people open up.

“It’s powerful. Sometimes it takes something really crazy to break through,” he says.

Derby City Sisters’ first appearance was at PINK, the annual student-produced amateur drag show fundraiser for University of Louisville’s LGBT Center. Even though the group expected a warm reception, stepping out for the first time in religious-themed drag did a number on their nerves at first.

“Oh, but as soon as we walked out in public, half the cars were honking at us,” says Sister Sweet Epiphany with a laugh.

The group followed up that campus stop with a few appearances at local gay bars. This Easter Sunday, they will host their first organized event: Lust for Life, a bar crawl that will take the sisters and their supporters from Big Bar to Mixer.

Where the new organization goes in the long run remains to be seen. “It always has to be about evolving,” Phillips says, “especially as a house that’s forming.”

Phillips first seriously considered starting Derby City Sisters when he met a sister during a “RuPaul’s Drag Race” cruise held back in December. “At first I never thought I’d ever be a part of this, or be in drag,” he admits, “but nobody else wanted to step up.”

So, in the spirit of new beginnings, he sent his letter of intent to the Sisters of Perpetual Indulgence as soon as the clock rolled to midnight and 2014 began. Since then, Derby City Sisters has grown to 20. Twelve are sisters who manifest as drag nuns and command the spotlight wherever they appear. Three members are guards, who are there to protect the sisters from hecklers or worse. Guards are typically plain clothed or not in full drag. Their existence is a precaution and a reminder of the turbulent reception mission houses have sometimes been met with during their advocacy. Rounding out the Derby City Sisters are “angels,” who Phillips describes as active supporters who choose, for whatever reason, not to manifest as either sisters or guards.

In preparation for their appearance and future events, many members have spent countless hours shadowing and learning from the Sisters’ Nashville-based mission house. Joining this ministry isn’t as time-consuming as becoming a “real” nun, but it does require a dedication and a devotion to a cause.

“You really have to learn the sistery,” says Phillips. “This is a bit of a calling.”

For more on the Derby City Sisters, visit their Facebook page.