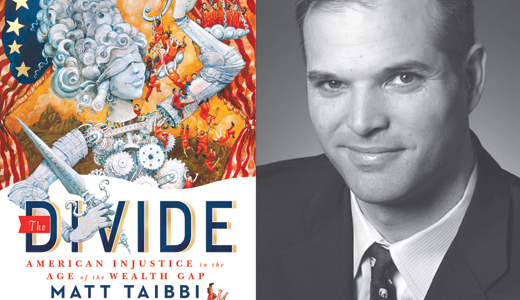 Former Rolling Stone political writer Matt Taibbi visited Louisville last week to talk about his new book, “The Divide: American Injustice in the Age of the Wealth Gap.” Whereas his last New York Times bestseller, “Griftopia,” chronicled the reckless fraud and swindle perpetrated by Wall Street banks that wrecked the global economy in 2008 — before taxpayers bailed these same companies out — for his new book, Taibbi sought to chronicle the prosecutorial aftermath of such crimes … or the lack thereof.

What he found was not only an astonishing lack of will to criminally prosecute the worst players of the crisis, but an accompanying disparity in how our justice system zealously goes after and locks up the poor in our society for the smallest of crimes at rates that dwarf everywhere else in the world. A global firm swindles billions of dollars through fraud and gets a fine — no jail time, of course — but a person steals a pair of tube socks and gets a jail sentence and their life ruined.

Taibbi points his finger directly at the Obama administration for the kid-gloves approach they have taken toward white-collar criminals, which did not happen by accident, rather by design. Attorney General Eric Holder — who, like many in the Obama Justice Department, came directly from working for many of these same firms — has led a strategy to consider the “collateral consequences” of criminally prosecuting such fraudsters, as bringing the hammer down on the “too big to fail” firms might harm the economy and lead to the loss of jobs.

However, for those not lucky enough to have their own team of high-priced lawyers and lobbyists at their side as they enter the criminal justice system, there is very little mercy shown to them. In this age of American inequality, those without means are deemed expendable and thrown into the prison pipeline, but others simply pay their fine, accept their slap on their wrist and move on with their lives … and considerable wealth.

LEO caught up with Taibbi and asked him about reactions he’s received from his book, media coverage of the fallout from the 2008 crash, and what it would take to bridge this divide in the justice system.

LEO: I’ve noticed you’re getting some pushback for saying that the George W. Bush administration was tougher on white-collar Wall Street criminals than the Obama administration. Is that kind of knee-jerk defensiveness surprising, considering you laid out a pretty clear case for that in your book?
Matt Taibbi: What’s so weird about that is I’ve been really critical of the Obama administration for years and years and years, but I only ever hear from those kinds of people when that comparison is made. It’s when you say something comparatively nice about Bush, that’s when they get angry. They can hear years and years of me criticizing Obama on this, and it doesn’t seem to bother anybody, but saying that Bush tried more of these cases is just unacceptable. It’s weird, but not unexpected.

LEO: What does it say about the media in America that this widespread corporate/Wall Street crime spree has gone virtually unpunished and has been so underreported over the last six years?
MT: It doesn’t speak well of us. Obviously, I was for many years part of that, so I’m not going to sit here and point a finger at other people and say, “You all suck.” It’s a difficult subject. And you have a lot of people who are telling you these things aren’t crimes. So unless you know better, it’s really hard to do that reporting. I remember when I first wrote about Goldman Sachs, I was so terrified that I had gotten it wrong — because everybody was telling me I was wrong — that I almost didn’t do the story, because it’s intellectually kind of intimidating. I think that’s a problem. Obviously there’s the space problem, there’s the complexity problem. Mainly, it’s just fear of looking like an idiot that paralyzes reporters.

LEO: In addition to their lawyers …
MT: Right. You have to be … what does Elmer Fudd say? “Be very, very careful when you’re hunting that kind of rabbit.”

LEO: To what extent is this disparity in justice inevitable in our current political system? Would there have to be some extremely large systemic change in how politics is funded in order to hold these people accountable?
MT: I talk about this in the book a little bit. There was that moment in the late ’80s and early ’90s when the Democrats started taking money from the financial services sector, and that was easier than having to rely on labor money and minority coalitions and similar groups. What happened after that is now you’ve got a political consensus about people who are on welfare, people who live in Section 8 housing, and they don’t have a natural lobby anymore because of the money situation. So I think that’s right, you’d have to fix the whole way we run elections. They’d have to be publicly funded or something for there to be that kind of awakening. Because right now, you can run a campaign for Congress with five important donors from the financial services sector, but if you want to run regular people, you’ve got to be out there getting money from tens of thousands of people, so it’s very difficult.

LEO: So once President Rand Paul comes to Washington, how do you think he would address this disparity in justice you wrote about? Or would he just be more of the same?
MT: We’re all looking forward to the Paul presidency already, right? (laughs) Well, wouldn’t he theoretically suck a little bit less on some of it? Because there would be fewer people in jail for drug crimes and such? I’m not sure I believe that, but that’s a theory. As for the white-collar crime, I don’t have a strong conviction that he’s going do anything. (Paul’s type) isn’t really about regulatory enforcement, anyway. And I think there’s already a school of thought that these are regulatory issues and not criminal issues. So somebody like Rand Paul is going to be exactly the kind of person who will be likely to think that way. So I wouldn’t expect a lot of criminal cases from him on that. Then again, from whom would one expect a lot of cases? I don’t know, but definitely not him.

LEO: Or even expect Paul in the White House in the first place …
MT: Yeah, President Rand Paul’s a fun thing to think about … Jesus.