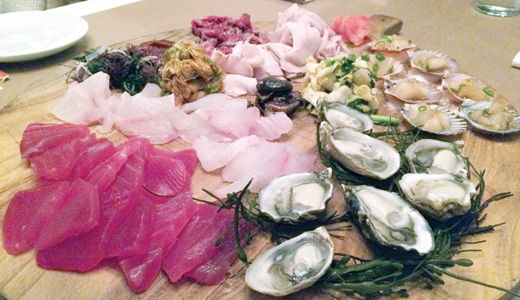 One big drawback to my voracious appetite, beyond having little to show in quality worldly possessions and battling the possibility of an expanding waistline, is that I actually get bored sometimes with our local food scene. Sometimes I will have an irrational feeling that I’ve eaten everything in the city. Not surprisingly, I usually fail at willing a new restaurant to pop up at my pleasure. What’s a salivating girl to do?

Years ago, I moved back to my hometown of Olympia, Wash., for a few months to see if I wanted to resettle there. An old friend asked if I’d join her for a meal at a pop-up cafe. I had no idea what I was getting into, but I said yes.

We drove down to a charming lakeside home, where a chef had set up in the kitchen. After a $25 donation to a charity, I chowed down on an inventive five-course vegan meal, which included cauliflower bisque, pan-seared tofu wrapped in nori and a lovely custard. It was a delightful surprise and so much fun to participate in this momentary showcase of the chef’s skills.

Fast-forward years later and I’m in New York City, where a friend takes me to a pop-up cafe in a trendy hotel in Williamsburg. The hotel set up an impromptu ramen restaurant, serviced by chef friends out of California. They went all out and even built a temporary ramen bar for the occasion.

Throughout the past few years, I have noticed these pop-ups becoming more popular in big cities, where people flock for culinary experiences.

I returned to Louisville hungry for another collaborative experience. These kinds of culinary showcases are becoming more common here, but many are still using the “tasting fair” format. I struggle with tasting fairs. I just can’t imagine that pumping out hundreds of small bite-sized servings of an entree is bringing the chef’s best show. This is why I was excited when I heard about Rye and Atlantic No. 5’s collaborative “Japanese Comfort Food” dinner.

On top of my newfound love of pop-up culinary events, I was especially excited to try it because of my Japanese heritage. Most of my childhood comfort foods are Japanese and can sometimes be hard to find in Kentucky. So on a chilly Friday evening, I made my way to Atlantic No. 5 to chow down, family-style, with some new friends.

I had the fortune of enjoying my meal with Rye’s events and office manager, Erin MacDonald. She explained that the crew working the kitchen was a mix of folks from Rye and Atlantic No. 5 (both are co-owned by Michael Trager-Kusman). She said they were blessed with a lot of extraordinary talent in their kitchen. They enjoy doing events like this in order to give their staff a chance to really explore and showcase their creativity. I was definitely down with that.

The meal started with “sashimi & banchan.” Sashimi is prime cuts of fish served alone. Banchan is the many small side plates served with dinner in Korean cuisine. We were presented with a heaping platter of Korean and Japanese bites, including sweet morsels of raw scallop and oysters; fresh, meaty cuts of tuna; and thin-sliced pearly pink, tender pork loin. Japanese oshinko (pickles) neighbored a mountain of mouth-watering kimchi (fermented vegetables). The server referred to it as “Asian charcuterie,” which I decided was quite clever.

Following the first course, we had a coconut miso soup that really tasted like a Thai-style soup. I didn’t detect a lot of miso, but the flavor was still good. I was looking forward to course three, which was a favorite of mine called kushiyaki. In Japanese, kushi is skewer and yaki is to grill. We had five skewered grilled meats to choose from. While they didn’t serve the meat skewered like they do in Japan, the flavors were familiar and delicious. My favorite was the bacon-wrapped enoki and maitake mushrooms that made me nostalgic for my childhood summers in Tokyo.

Blue crab soba, furikake rice bowl and miso cauliflower followed. I loved the combination of Indian orange samabal in the soba. It gave the dish a great mild citrus crunch. Unfortunately, the soba was slightly overdone. The furikake rice bowl was so simple but had a lovely roasted flavor to it, due to the millet they added to the furikake (rice topping). It reminded me of the crunchy browned rice my mother coveted on the bottom of the pot in old-fashioned rice cookers. The miso cauliflower was yet another miso concoction where the miso was far too subtle.

Dessert was another triumph. While it was easy for my eye to crawl to mammoth miso chocolate chip cookies topped with a generous smear of frosting (again, I did not detect the miso), the real superstar was the coconut tapioca. The herbaceous basil played so well with the coconut and fruit that we couldn’t stop eating it; I’m still a little anxious that I may have gobbled more than my fair share. I even forgot I was alarmingly full and unconsciously activated my reserve dessert stomach. (I’m sure, with further medical research, this will be proven to be a thing.)

Experiences like this are akin to feeding your eyes at a new and inventive art exhibition. Hopefully, more restaurants will take up projects like this to help showcase their kitchen talent. Rye will be having another special event on April 23 featuring morels and other mushrooms (check out ryeonmarket.com). Don’t miss it, and keep an eye out for future pop-ups, fellow Louisville eaters.